When executives at Bonify were approached about a year ago on an initiative to introduce a voluntary standards and certification program for premium quality cannabis products, they immediately warmed up to the idea. 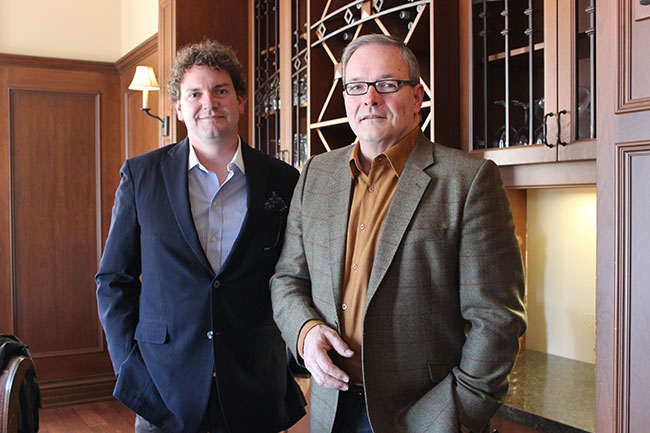 BUILDING MOMENTUM: GQA CEO Jon Watson (left) and board member Peter Gamble have been actively engaging industry representatives and cannabis experts to develop the draft standards for GQA certification. When executives at Bonify were approached about a year ago on an initiative to introduce a voluntary standards and certification program

“We thought this would be an outstanding way to not only meet but exceed existing standards in the country for production of cannabis,” says Jeff Peitsch, CEO of Bonify, a Winnipeg-based licensed producer (LP) of cannabis.

Coinciding with the legalization of recreational marijuana later this year is the launch of an independent, multi-stakeholder standards certification body for high-quality cannabis products. The Growers’ Quality Assurance (GQA) aims to be the gold standard for quality and reliability in cannabis production, says Jon Watson, GQA’s CEO.

“Trust is the currency of the new economy,” Watson tells Grow Opportunity in an interview. “Brands need to be honest and consumers need to know exactly what they are getting.”

GQA is in the process of developing the standards – in consultation with its advisory board, which includes cannabis master growers – and the certification process that participating LPs will subscribe to.

Ultimately, Watson says, the final standards and certification process will be the resulting consensus among GQA-participating LPs and the expert panel comprising the organization’s advisory board.

“We are talking to people from the cannabis cultivation technology side, from the laboratory side, from the regulatory side of the government, and now licensed producers themselves, which include their quality assurance people, their master growers, their science teams,” Watson explains.

Bonify is one of nearly 100 currently licensed producers of cannabis for medical purposes in Canada. Already, these LPs are subject to rigorous standards imposed by Health Canada. Peitsch believes, however, that the ability to raise the bar even higher and exceed those already meticulous requirements will set Canadian LPs apart – particularly in the emerging and fast-growing global market.

The Bonify CEO views GQA as a stretch goal for firms to bring more energy and effort to standardize processes and incorporate those into their usual operations. “This will ultimately result in a better product, a more secure product from the patient’s standpoint.”

Wine wisdom
The GQA draws from parallels and the experience of the Canadian wine industry’s Vintners Quality Alliance (VQA), a regulatory system that sets out geographic appellations and imposes strict production standards for Canadian wine growers.

The VQA tag has become a symbol for the consumers that differentiates wines that are made and bottled in Canada, says Peter Gamble, a GQA board member and former executive director at VQA Canada.

Gamble sees some parallels between wine and cannabis growing in terms of the “art” that goes into growing and producing consistent, high-quality products.

“The first thing is the green thumb and the excellent controls not just in terms of pesticides and safety and sanitation – which the federal governments of the world will address – but in terms of the quality. ‘Is this something I can be confident is going to be good?’ And when you know it’s been grown well, it takes you 90 per cent of the distance,” Gamble explains.

He recalls when the wine industry started the process of establishing a nationwide standard, the Canadian General Standards Bureau required a 58-member multi-stakeholder committee to accomplish the goals.

He says while the GQA composition may not necessarily be as massive, it is important for the organization to have a good representation of all aspects of the cannabis industry and develop the standards that “everybody – even begrudgingly – agrees on.”

The standards body should also be able to draw the line between what is objective and what is subjective, Gamble says. Standardizing processes and operations would naturally require additional investments and participating LPs should be allowed to decide whether they want to roll out across the board or to a selected part of their business.

“(GQA) needs to be set up so that it works for them as well, so that they are able to do (the GQA certification) and still be able to compete freely in the commodity part of the sector,” Gamble says.

However, he adds, there needs to be a healthy argument on where to draw the line when it comes to quality and the objective processes and procedures that just can’t be compromised.

The GQA label, according to its proponents, will ultimately provide consumers a level of confidence that they are buying the best quality, Canadian cannabis products.

Consumer education will be an important component of GQA, says Adine Carter, chief marketing officer at Tilray, one of the largest producers and exporters of cannabis in Canada.

Like Gamble, the Tilray executive also hails from the wine industry and experienced first-hand the value of product quality assurance.

“A quality assurance program provides consumers clarity and assurance that what they are buying is safe and reliable, and the GQA program will fill that role for cannabis,” says Carter, who is also a member of GQA’s advisory board.

The GQA hopes to capture the top 20 per cent of cannabis produced in Canada with the highest quality strains.

“When you are identifying the top tier, people at least have the option to try it and say, there is a significant difference here and I’m happy to pay that extra 25 to 30 per cent in order to know that this has been done well and people have reviewed it,” Gamble says.

Current standards
Canadian LPs are currently governed by standards and testing imposed by Health Canada under the Access to Cannabis for Medical Purposes Regulations. The announcement by the federal government to legalize recreational marijuana has prompted advocates to push for more public education around cannabis, which is soon going to be available for legal recreational consumption.

In response, voluntary standards and certification programs for the cannabis industry – locally and internationally – have surfaced. The National Institute for Cannabis Health and Education last year announced its CannabisWise certification, a voluntary program that will test and certify businesses based on specific metrics that include quality control, regulatory compliance and promotion of responsible cannabis use.

International standards body ASTM International has also created its own cannabis standards – Committee D37 – last year. It will look at safety and quality, and will develop test methods and standards for cultivation practices, quality assurance, packaging and security, the ASTM website says.

“You need organizations to set standards,” comments Dr. Jason Busse, associate professor at McMaster University and co-director of the Michael G. DeGroote Centre for Medicinal Cannabis Research. “It’s one of the reasons why the government is moving away from prohibition to legalization… to ensure that people are getting a more safe, standardized product.”

Any certification process, he added, would have to be backed by good, strong evidence to direct and support the standards parameters.

“You need researchers involved in that kind of body because otherwise people are going to challenge it,” Busse cautions.

Things are changing rapidly in the cannabis market and Gamble points out it is important to have “the most knowledgeable people” in the industry sitting at the GQA table. “The minute you got a GQA with a technical committee that’s like that, then suddenly you have all these players at the table talking to each other. Suddenly, there’s more and more people doing it and who’s making that improvement.”

The GQA label will differentiate the higher tier cannabis products, making it easier to compete in the international market. Ultimately, the goal is to ensure GQA standards and processes will transcend national boundaries and enable its quality-assured products to be internationally recognized and compete in the emerging global cannabis market.

A growing list of nations that have moved or are moving toward legalized medical marijuana is creating a global marketplace for legally grown, high-quality Canadian cannabis products. A number of LPs have either already been granted or are seeking export licences from Health Canada. Some are already actively expanding in the global market. Bonify, for one, is looking to expand its footprint beyond Canadian borders, and is currently in the final stages of acquiring an export licence, its CEO tells Grow Opportunity.

“We will continue to build production capacity, not solely for the purpose of Manitobans, whom we hope to be able to continue to serve, and not just Canadians,” Peitsch says. “We have had quite a number of international authorities reach out to us as well.”

According to a report from the International Narcotics Control Board, Canada moved just less than 100 kilograms of legal cannabis across the border in 2016. Exports data for 2017 is expected to top those of previous years.

“Canada is already demonstrating that we are ahead of everybody else, that we’ve got the technical proficiency and we’re doing some incredible things,” Watson says. “GQA essentially makes our industry that much more sophisticated in the eyes of the world… that is going to resonate particularly in places like Germany, Australia, Italy and the U.K.”

Already, the GQA executive has been doing the international rounds – in the U.K. and Germany, initially – to discuss the potential of GQA-certified cannabis for global recognition.

Watson is no stranger to the world of government liaison – having spent a decade in senior political roles, including as campaign manager for three federal elections, and has represented the Prime Minister in provincial meetings.

“We have an ongoing dialogue with the government of Canada to accept – if we choose to accept it – some support on the development around some of the technology we are using. In many dimensions, we will be involved with the government – provincial and federal – but it’s hard to define some of those things (at the moment) because they are all ongoing,” Watson says.

GQA is developing an interactive app that will allow users to acquire information about GQA-certified cannabis products, including strains, indications, and the company where the product originated. The app will also allow for user reviews, Watson says.

Early this year, the government released proposed regulations that impose restrictions on cannabis labelling, a move that drew criticism from many in the industry. The rich content the GQA app will provide for consumers hopes to address some of the packaging limitations that will be imposed on cannabis products post-legalization, Watson points out.

Related
Sky is the limit
This is Grow Opportunity
Growth is in the air
Smell science: Addressing odour issues in cannabis production