There are many diseases of cannabis that have the potential of destroying cannabis crops, but if I have to pick one to be especially fearful of it would be Powdery Mildew. It is just not a theoretical calculation, I have seen it happen. 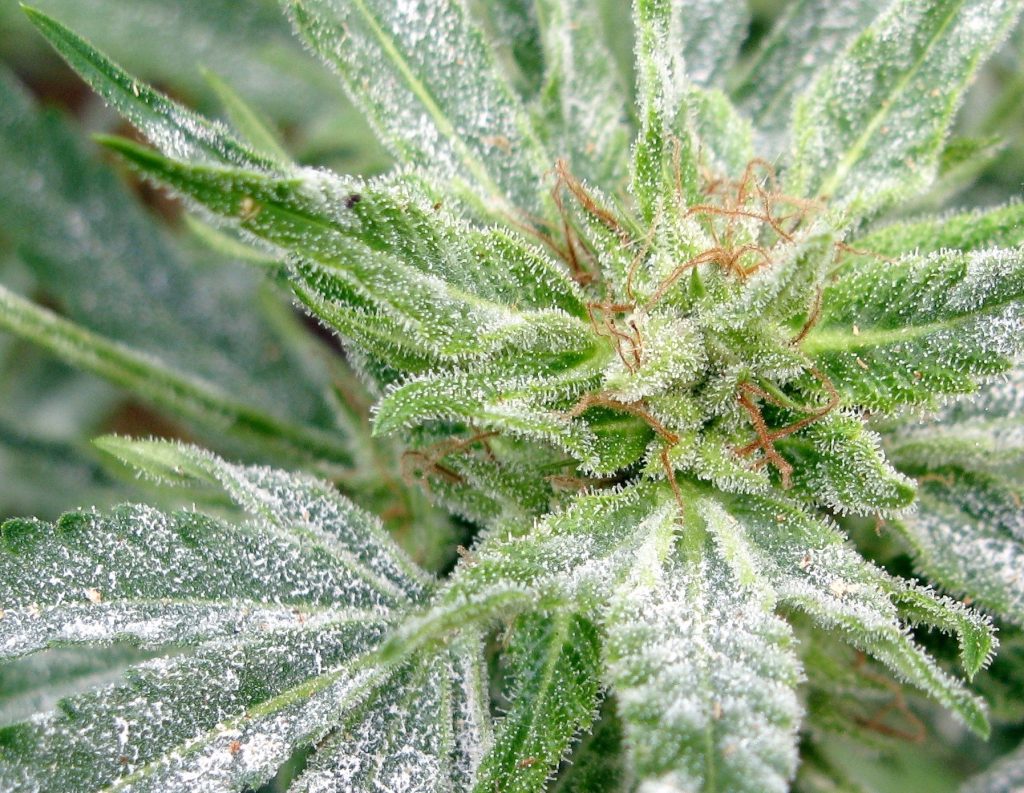 There are many diseases of cannabis

Powdery Mildew (PM) is a group of fungi, which cause mildew symptoms in many crops. It is one of the world’s most common agricultural concerns, with wooly aphids or other sucking insects often serving as vectors of transmission.

One can see the symptoms and probably very easily diagnose and describe. PM can appear on old or young leaves and the fungus can take on entire fully mature crops. The point is that it can infect cannabis crops at any stage of growth. Once the leaves are covered with PM fungus, the plant’s photosynthesis process is significantly reduced and that affects the its growth.

As the term Powdery Mildew indicates, the symptoms appear as small, tiny white spots on lower leaves or younger leaves. Before turning white, they are greyish, brownish spots mostly on top of the leaves and can spread very fast if temperature and relative humidity are conducive. The appearance of symptoms is very important to understand when planning control measures.

PM infections will start as tiny specs on the upper surface of leaves. The spots and clearer symptoms appear when spores have germinated and started to grow – a condition commonly known as mycelium. Mycelium are growth strands and require high relative humidity for spore germination and establishing colonies. This phase requires high humidity and condensation as free water on leaf surface.

After experiencing white spots in the beginning, the entire surface of the leaf can then be covered by white spores in the second phase of growth. This is when the PM fungus starts sporulating, and producing more spores. They are produced in millions.

These are hardy structures and can stay dormant for a long time. These spores are produced when the climate conditions are drier. Most of the growers produce their cannabis plants at temperatures around 23C to 25C and a relative humidity of around 50 per cent. These conditions are very favourable for production of spores.

For cannabis producers, one of the key questions during the production stage is: Are some strains more susceptible to PM than others?

Well, although not claimed by suppliers of cannabis strains, I have seen some strains that are more susceptible than others. I am sure more research will be done to study PM resistance and tolerance, but until then growers have to make their own observations and select strains which are tolerant or have some resistance.

Another question is: What climate conditions does PM happen the most in? The answer for this raises yet another question and that is where do spores come from to start with?

The fungi in this category are described as facultative parasites, meaning that they are specific to their hosts. For example, PM attacking cucumbers does not
attack tomatoes and vice versa. So spores can be in the air, in a ventilation system, in the greenhouse or in the indoor structures. The spores may be sitting on the leaf surface and waiting for the climate conditions to be ripe for initiating infection and spreading in the crop.

This fungus is quite interesting in the sense that it needs high relative humidity for spores to germinate and lower humidity for producing white spores.

It is important to understand a few basic growing functions. During the light period, plants carry out what is called photosynthesis, that is the light energy is fixed in the leaves whereby carbon dioxide is combined with water and the end result is carbohydrates. These carbohydrates are made and stored in leaf cells. Water is used up in this process. This water is supplied through the irrigation system and cannabis plant transports it to leaves whereby minerals are retained in the cell and water is transpired out of the stomata. Some water is used by metabolic functions of plants and the rest is transpired. This water in the air contributes to relative humidity in the air.

During dark periods, the stored carbohydrates are broken down and water is released. This is the water that contributes to higher relative humidity. If the interaction of temperature and relative humidity is not managed properly, then dew can be formed and result into the start of an infection process for PM.

Paying very close attention to climate is going to be the key to control Powdery Mildew. Growers should know about the set points for temperature and relative humidity and learn about Moisture Deficit or Vapour Pressure Deficit.

Dr. Mohyuddin Mirza (drmirzaconsultants@gmail.com)  is an industry consultant with more than 37 years of experience in crop development, production and marketing. He specializes in the technical aspects of hydroponics and systems for plant production.