Features Business Human Resources Management
‘By us, for us’ 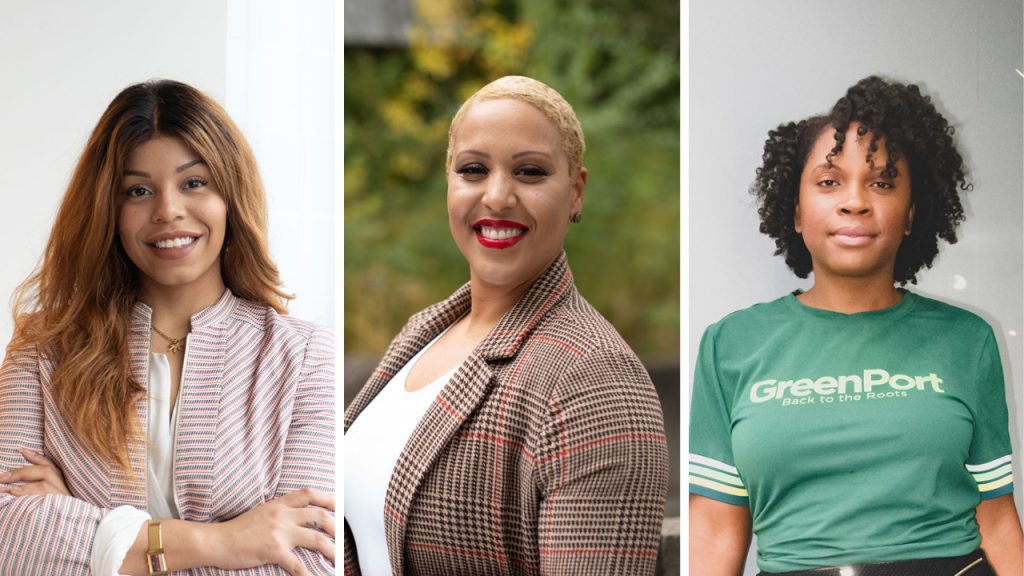 As Canada’s legal cannabis industry has developed in fits and starts, three sure and steady women leaders have emerged who are contributing notable skills and undeniably different perspectives. They’ve shown they care not only about their customers, but also the industry as a whole.

Grow Opportunity invited them to a virtual roundtable called, “Women Rising,” that marked International Women’s Day  (March 8) with a lively discussion about women and blacks, indigenous and people of colour (BIPOC). Here we probe deeper into their own stories.

Ashley Athill
CEO and co-founder, HRVSTR
Ashley Athill leads the first federally licensed cannabis cultivator that is black-owned. But before she became a cannabis entrepreneur, she successfully climbed the corporate ladder in a decade-long career at Shepell, an employee and family assistance program provider with global reach. 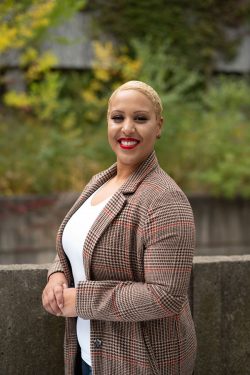 In many ways, it was fertile soil for growing skills that have helped her develop as a cultivator. Starting out at the call centre, for example, she provided information and one-on-one support to employees coping with everything from thoughts of suicide to daycare needs. As she advanced in the organization, she structured programs for a variety of employers, including the Toronto Police.

When Athill was finally ready to launch a venture of her own, she knew she could “master and thrive in high-pressure situations,” as well as communicate effectively in a variety of settings. These skills were “priceless.”

She stepped out into the cannabis industry and founded Sensii Cannabis. Drawing on her experience in Human Resources, she created an educational curriculum on how to grow cannabis plants. It was extremely satisfying, she says, because the classes brought together such diverse groups – people who would likely never interact otherwise. Later, she added an arm to help HR departments adapt to the environment after legalization.

“It was very well received,” she adds, “but I really wanted my own farm.” Putting Sensii aside, she founded HRVSTR in October of 2018 in Toronto, her hometown. Working with her brother Michael, she now has one product called Grape Marmalade, with six others pending. All are targeted to the “connoisseur” market, she says.

The company is well-positioned to grow. As this target audience becomes more sophisticated, people are looking more at terpenes which allow the delivery of flavour, she believes. “Terpenes are not as celebrated as they should be, they evoke an emotion.”

For example, one product that HRVSTR has in development is Hardo Bread, which hearkens back to a Jamaican bread similar to a Pullman loaf but sweeter. Athill says this cannabis reminds her of home, and of her grandmother and mother baking. And it beats consuming more carbs!

As the cannabis industry evolves, Athill salutes the influence of female buying power and adds, “We’re in a special position to create our own products by us, for us. My focus will always be on providing top quality cannabis to the market while advocating for a level playing field for women and the BIPOC community.”

Those are not empty words. After wrapping up her call with Grow Opportunity, she jumped on to another to mentor a young man of Jamaican heritage. For him and others, she serves as an example of what they can become.

Antuanette Gomez
CEO and founder, Pleasure Peaks
Some might say that Antuanette Gomez herself is a brand: one that’s sultry and savvy but also sincere and compassionate. Those personality traits come to life in three ventures under her brand umbrella: Pleasure Peaks, a cannabinoid-based sexual health company; the Green Rush program, a business accelerator; and Acapulco Gold Company, jewelry that features the leaves of that iconic plant. 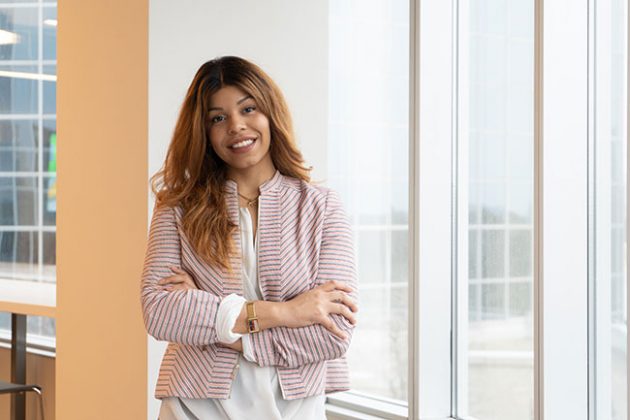 Gomez has been in the industry for more than eight years. The seed for her ventures grew from her studies in holistic nutrition. “I was learning about different natural alternatives to healing — from food to herbs to cannabis — which were eye-opening. But it wasn’t until I interned at a chronic pain clinic that I realized how many people were suffering.”

In particular, she was shocked by those with sexual health ailments related to multiple sclerosis, back pain, and endometriosis. And so began her foray into medical cannabis treatments.

What makes her business different? “We are a cannabis company with integrity,” she says. “We come from the legacy market so we understand that cannabis is about a lot more than profits.”

And Pleasure Peaks offers a lot more than products. The Toronto-based company brings together sexual assault survivors with sex educators and therapists in a private Facebook community. There’s also a podcast that “empowers people to share their own cannabis and sexual health stories, because we know it can be life-changing for so many others.”

Gomez believes that many entrepreneurial opportunities exist in cannabis that go beyond cultivation and retailing. She encourages people to think about potential careers in clinical research or cannabis education and media.

The advocacy of this Toronto native comes from a deep and personal place. When she was only six, her grandfather, a Rastafarian, was deported from Canada due to his religiously-based cannabis use. A couple of years later, her father was jailed for possession of a gram of pot. Yet Gomez was able to channel these traumatic events into something positive. “This conscious black woman,” as she refers to herself, became involved in holistic nutrition to help treat her grandmother, who was suffering with breast cancer.

Although her business is grounded in compassion, she admits she’s a fighter. In addition to stigmas associated with cannabis, Gomez is battling censorship of pleasure, intimacy and love. “It’s worth fighting for, a thousand per cent, every single day. Pleasure is your birthright — all races and all genders,” she says.

Vivianne Wilson
Founder, GreenPort Global
Wilson is astute and alert: she’s clear on what’s going on before her eyes but also what’s missing. And she calls it out. 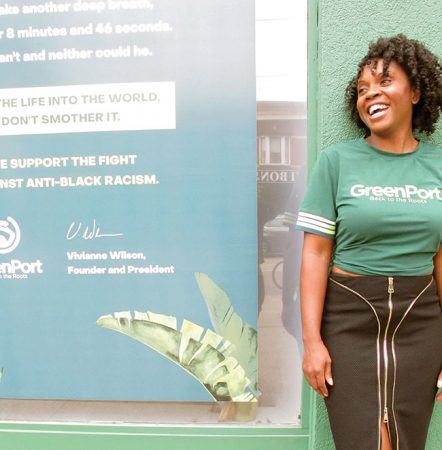 As the first woman of colour to run an independent cannabis retail store in Canada, she was shocked to see so few people of colour in the industry. Instead, she witnessed delays and ill-informed personnel during the regulatory process.

Ontario Premier Doug Ford promised that the Alcohol and Gaming Commission would provide fair access, she says. “What does that mean then? If most of the retailers out there are all run by wealthy corporations, all run by people who look the same, that’s not fair and that does not provide us with enough access.”

Wilson feels a keen responsibility to “carry the torch,” even as she is running her retail operation called GreenPort, which was federally licensed to sell medical cannabis two years ago and now retails cannabis in Toronto. In carving out a niche, she says, “One thing I see missing is education.”

Not at GreenPort. On its website, for example, there is an informative “cheat sheet.” Users can also tap into an interactive recommendation engine that allows them to explore different strains. To bring more science to consumer decision making, Wilson partnered with Lobo Genetics, a Toronto-based health-care technology company.

Her heightened awareness of situations and stakeholders likely derives in part from her professional experience in project management: a talent corporations love. Spanning a decade, her career included stints in health shared services, real estate, and home energy conservation, in addition to her own consulting practice.

And now she is applying this expertise to GreenPort. “One of the main skillsets that I learned as a project manager working with teams was how to make sure people had the tools they needed to get things done,” she says. “That would make it a positive experience for them.”

This awareness of the needs of others –an orientation not all project managers possess – has served her well as she’s worked not only with customers and employees of GreenPort but also government stakeholders, her retail neighbours, and service suppliers, like construction contractors.

And maybe it’s why she is so careful to try to respond to every comment posted on social media. Even that attention to detail tells a lot about the GreenPort brand. “It’s the in-store experience, the conversational exchange, the access to education that really makes a difference for people.”