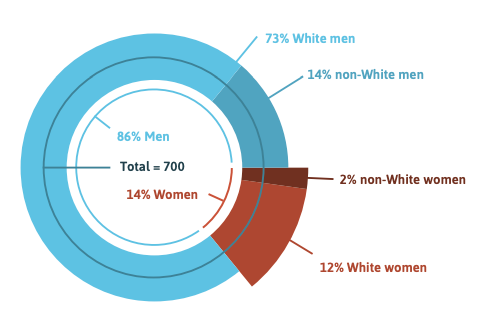 Overall, 84% of cannabis industry leaders were White and 16% were non-White. (Credit: Centre on Drug Policy Evaluation, University of Toronto)

Canada’s medical cannabis sector has a diverse set of names for its products and strains like Hindu Kush, Thai Sticks, Columbian Gold and South African Kwazulu. But when it comes to leadership positions in the industry, the names reveal a white, male dominance, according to a statistical analysis released recently. A lack of diversity in the industry appears to extend to new Canadians as well.

The new analysis from the University of Toronto’s Centre on Drug Policy Evaluation included 700 executives and directors across 166 licensed cannabis producers and 56 parent companies. The study found that overall, 84 per cent of cannabis industry leaders were White and only 16 per cent were non-White.

“Diversity in the leadership of Canada’s legal cannabis industry is critical to ensure that historically overcriminalized racialized groups are not excluded. Much work remains to achieve a ‘diverse, competitive and legal industry,'” said the authors of the report.

“While there have been some limited initiatives to facilitate greater industry diversity, there is a notable absence of government regulation and adoption of programs that would structurally address the underrepresentation of racialized groups that were disproportionately targeted and punished under prohibition,” the document reads.

Also private actors in the industry should “recognize the value in diversifying the racial and gender makeup of executives and directors, and adopt strategies to achieve such diversification,” the authors noted.

Here are some of the key findings from the report:

When it comes to Indigenous people included in the analysis, most are from the Assembly of Nova Scotia Mi’kmaq Chiefs, which holds a majority stake in a licensed producer. If those leaders were excluded, the analysis notes, Indigenous people would comprise only 0.6 per cent of Canada’s cannabis leaders.

“The industry can certainly benefit from more BIPOC (Black, Indigenous and People of Colour) leadership,” said Farhan Lalani, co-founder and director of Franchise Cannabis, a Toronto-based seed-to-sale medical cannabis company with a diverse portfolio of cultivation, processing and distribution operations in Germany, Denmark, Uruguay, and Colombia. The company is also looking to add partnerships in Asia.

“In this business, especially when you work internationally, cultural competency must be in your skill set,” said Lalani, who traces his ancestry back to India.

“Diversity in leadership gives companies the ability to understand and communicate effectively with people across cultures? It also allows the leadership team to be aware of its own world views and helps develop positive attitudes towards cultural differences,” he said.

The lack of new Canadians in leadership roles in the medical cannabis business is due to a lack of clarity in American laws, according to Ian Terrence, who advises potential investor immigrants to Canada.

“They fear that public knowledge of their involvement in the marijuana business in Canada may see them being turned away at the US border or if they travel back to their home countries, where marijuana is still illegal,” he said.

“The U.S. Customs and Border Protection (CBP) has indicated that those participating in the marijuana business may be turned away at the border, saying: ‘Working or having involvement in the legal marijuana industry in U.S. states where it is deemed legal or Canada may affect an individual’s admissibility to the U.S.'”

Canada, however, has continued to make immigration provisions to meet the urgent need for highly-skilled growers, investors and technical support staff in the industry. Since it’s legalization in October 2018, there have been at least 15 categories under National Occupation Classification (NOC) advertised for new Canadians wanting to join the industry.