Marijuana, long snuck on to college and university campuses for use in bongs and joints, is now being grown legally at several academic institutions across the country. 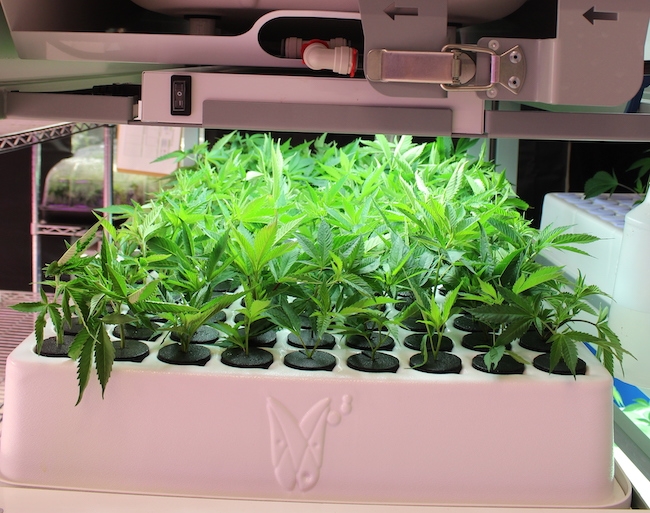 Eight academic institutions have obtained licences from Health Canada to cultivate cannabis for scientific purposes, allowing them to closely study the plant that was legalized for recreational use in October.

Some received special licences a few months before legalization and will be moving to licences with fewer restrictions in the future.

The University of Guelph is one of them.

Max Jones, an assistant professor in the department of agriculture, received cannabis plants several weeks ago after the school was granted a licence in September.

Jones said he plans to study the plant’s genetics, optimization of growing conditions and the creation of a gene bank to be used by both researchers and breeders.

For that work, Jones has a licence that allows the school to study cannabis tissue cultures – he does not yet have a license to grow the plant to maturity and must destroy the plants when his research is complete. The school will eventually move to a different cultivation licence that won’t be as restrictive, he said.

“By having this on campus, we can train students more hands on,” Jones said. “We can and have done research at the companies’ facilities, but that isn’t practical because they are so far away.”

Obtaining a cannabis cultivation licence is part of the university’s shift into marijuana research, an extension of the school’s long history in horticultural science. It plans to begin construction in 2019 on the Guelph Centre for Cannabis Research, where it hopes to grow pot plants to maturity for further study.

“It’s an exciting time to be in the plant sciences because the cannabis industry’s funding a lot of research that most industries wouldn’t fund,” Jones said.

Jones and a small team are growing miniature plants at a secure facility on campus and focusing much of their early work on tissue cultures.

“We are growing pieces of plants or whole plants in vitro and mass producing them that way,” he said, noting that two cannabis companies, Canopy and Up Cannabis, are providing the plants and some funding for research.

Jones said some of his research will help in the mass cultivation of plants.

“Because it’s in tissue culture, (the plant) comes out sterile, so they’re free of all diseases and insects,” Jones said. “This is important in the cannabis industry because they don’t really have many pesticides to use.”

Similar applications are seen in the potato industry, he said.

“All the potatoes are started in tissue culture, planted out, bulked up and you end up with potatoes,” he said, which helps eradicate disease and pests.

A spokeswoman for Health Canada said the new legal framework for cannabis “aims to encourage and facilitate research and development.”

“To support this research and development, Health Canada has improved the way that research on cannabis is authorized in Canada,” Tammy Jarbeau said.

Niagara College, which has its first batch of students in a commercial cannabis production graduate certificate program, obtained a licence in mid-August to grow marijuana to full maturity.

Students are learning about the complete life cycle of the plant, including harvesting and drying the bud. After their studies are complete, under the terms of its license, the college must destroy all cultivated cannabis, said Al Unwin, associate dean of environment and horticulture at the school.

Like Guelph, Niagara College got its license under the old regulatory regime so they could begin the program in September, before legalization, Unwin said. The school plans to get a licence under the new less restrictive regulatory framework, he said.

The two-semester program focuses on three areas, Unwin said: understanding plant science and how to grow and harvest marijuana, the related regulatory requirements and the business side of the industry.

“It’s a very hands-on program and having the cannabis on campus is absolutely critical,” Unwin said. “The habits that are created here will be instilled in them as they move on to the industry.”

Related
LPs and research institutions are teaming up in pursuit of science
CannTrust receives Health Canada approval for Phase 2 expansion
Filling the gap in consumer education
Cannabis 2.0: Where are they now?