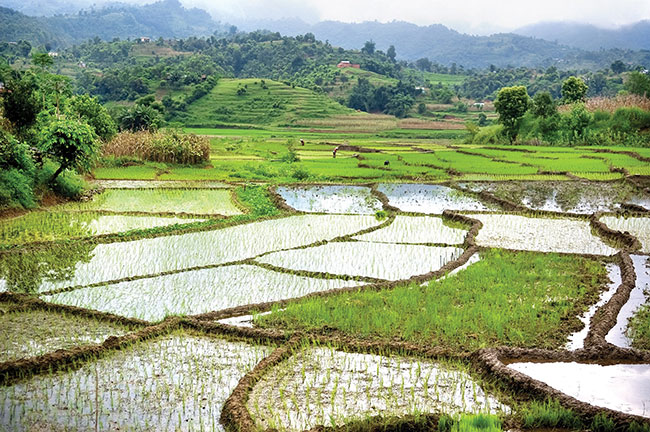 Flooded rice fields in India assist with the growth of plants and help to control weeds and pests. Photo: © Olena Ilienko / Adobe stock

Biopiracy, or bioprospecting, can be defined as the appropriation of knowledge, biodiversity, and genetic resources claimed for patent or exploitation for profit without permission or compensation to those communities that have traditionally nurtured those resources.

Thinking of having Indian food tonight? You can probably conjure the fragrant aroma of Basmati rice.

Well, about 25 years ago, a Texas-based company, RiceTec, received a patent affording it control over all production and import of Basmati rice into the U.S. market. If upheld, the legislation would have devastated many South Asian countries that prospered from rice exports.

What was their “novel” trait so worthy of such a broad patent? RiceTec plant breeders crossed a Basmati rice cultivar with a long grain rice from Texas. Yet crossbreeding has been done for millennia; it is hardly new.

Most WTO (World Trade Organizations) countries exclude plant variety protection from patentability, but not the U.S.

In the U.S., plant breeders can gain exclusive rights to “new” varieties, thereby forcing farmers to pay royalties, stop them from saving seed, or even keep them from breeding or growing certain cultivars.

The Indian government claimed patenting plants was theft of traditional knowledge belonging to generations of Indigenous farmers of varying regions — calling it biopiracy.

Biopiracy, or bioprospecting, can be defined as the appropriation of knowledge, biodiversity, and genetic resources claimed for patent or exploitation for profit without permission or compensation to those communities that have traditionally nurtured those resources.

Demonstrating that generations of farmers had been crossing several rice varieties in a specific region of India to create ‘Basmati,’ meant the patent was successfully overturned.

As for the question on whether biopiracy could happen in cannabis. Well, It already has.

There are well over a dozen U.S. plant patents on cannabis, including some held by Canadian companies. Arguably, the most famous strain to be patented is that of Charlotte’s Web by the Stanley Brothers. However, the first strain to be patented was a simple ‘sativa-dominant’ strain crossed with an ‘indica-dominant’ strain, dubbed an “Ecuadorian sativa.”

Recently, the “owners” of this strain were quick to promote claims that it had high levels of CBGA, shortly after reports suggesting that this cannabinoid could have merit in fighting COVID-19.

The notion of “owning” Nature or creating “novelty” from something that has been cultivated and traded amongst humans for thousands of years, is a debate for another time.

But this is different from “owning” a plant.

For instance, many of these breeders would consider their efforts to be art, and they may make claims to their artwork, but would never attempt to own all art-making materials.

That being said, the elephant in the room remains this: who will address the notion that many of these breeders’ strains have their foundations from landraces such as Hindu Kush, Afghani, Durban Poison, Congo Red, Colombian Gold, Thai Stick, Acapulco Gold, Jamaican Lamb’s Bread, and many others? And why have there been no concrete efforts to retain these genetics as part of the commons, or discussions about compensating the countries of origin?

How can Canadian cannabis leaders help?
As a global industry, the cannabis sector must collectively ensure that countries of origin do not become further exploited. Perhaps it should even go as far as to look at the means of supporting efforts for financial retribution, working towards decriminalization, legalization, cannabis genetic preservation, and further education.

As nations increasingly legalize cannabis cultivation, especially in the global South, there will be concomitant increase in sun-grown cannabis. Primarily because outdoor cultivation is the most cost-effective, most environmentally sustainable, and the flower or concentrate might make the most robust medicine with diverse flavonoids, terpenes, and other medicinal constituents.

Moreover, the increased presence of the plant worldwide, coupled with temperature increases, are introducing a host of new pests and pathogens, adding cannabis to their menu. However, within the domesticated genome of this millennia-old plant, there are genes that may potentially offer unique traits to combat these new and upcoming selection pressures.

Traits that confer minor cannabinoids and medicinal molecules are one thing, but traits that can produce a more resilient cannabis in times of climate chaos are important genetics that must be treated as part of the commons to be shared amongst current and future breeders.

Increased understanding of the cannabis plant genome will help better explain the power of the plant, affording insight into how it can be better manipulated for disease and insect resistance, drought tolerance, shorter flowering times, increased secondary metabolite synthesis, etc.

At the end of the day, efforts to keep the genomic library public is in our best interest, as it provides freedom for the plant to meet the needs of a dynamic and ever-changing climate. 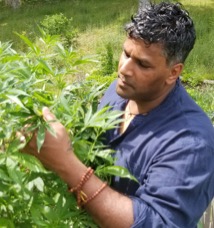