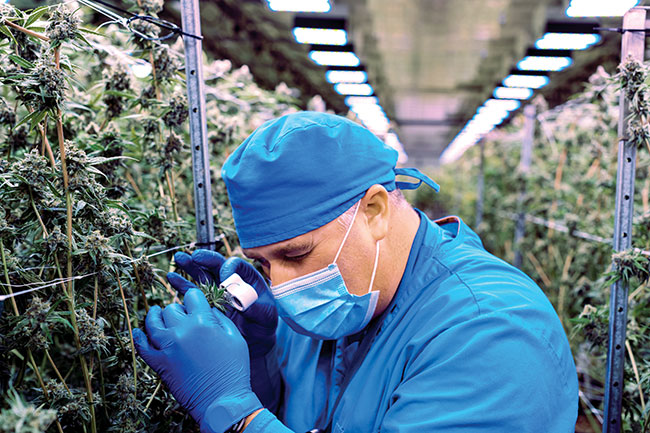 “There are no stupid questions that you could ever ask.” Ward always encourages his team to learn, saying success and failure are part of improving one’s growing skills. PHOTOs: Dean Casavechia /Aqualitas

Jake Ward was the first employee to be hired by licensed producer Aqualitas, at a point when the Nova Scotia company was in the early stages of building a proprietary aquaponic system that will become the framework of its cannabis cultivation operation.

Ward immediately took the lead in project development, attending courses in Europe, the U.S. and Canada, learning what he can about aquaponics and how it can best serve his company’s vision of sustainable production.

Four-and-a-half years later, Aqualitas is among a handful of Canadian licensed producers cultivating organic cannabis in an aquaponics system. But the journey was not without challenges, according to Ward.

The end-result is a thriving, organic, recirculating aquaponics cultivation system with Ward at the helm of production. The 26-year veteran master grower’s lead role in Aqualitas’ progression has not gone unnoticed by the company’s executives.

“Successfully growing flowering plants using aquaponics at scale is exceptionally difficult, as it requires a system in perfect balance to achieve maximum outputs,” writes Myrna Gillis, co-founder and CEO of Aqualitas, nominating Ward for the 2020 Canada’s Top Grower award. “Jake was up to the challenge, and helped lead a team that addressed known challenges with nutrient deficiencies in the flowering stage of the plant. He worked with living soil for aquaponic farming, and in water using pure aquaponics and the results speak for themselves in the product quality and overall reception by consumers and researchers.”

For more than two decades, Ward has been growing cannabis in a variety of media – soil, hydroponics, aquaponics – and has gained through trial and error a treasure trove of cultivation knowledge that he now gladly shares with any grower willing to learn. “There are no stupid questions that you could ever ask,” he frequently tells his cultivation staff, “the question that is stupid is the one you don’t ask.”

Ward manages up to 28 staff at any given moment, including growers, aquaculture technicians and other production staff. He and his team look after the lifecycle of the cannabis plant, from genetics and growing to trimming, drying and bulk packaging.

Ward may be the one being recognized as Canada’s Top Grower but he shares his achievements with the Aqualitas team.

“I can tell you that we have some of the best cultivators in the world – I don’t care what anybody says, that’s in my eyes – many of whom come here with no experience at all and have proven to be the best. I’ve watched them grow over the last few years and that makes me feel a sense of accomplishment,” Ward says.

Something fishy
Aqualitas operates a 40,000-square-foot commercial facility in Brooklyn, N.S. Growing alongside cannabis in the decoupled, closed-loop aquaponics system are koi fish – about 900 of them. The nutrient-rich water from the fish tanks provide nutrition to the cannabis plants.

Aquaponics has been emerging in the aquaculture and agriculture worlds as a sustainable food production system. It uses a recirculating aquaculture system that essentially reuses and recirculates water through the system using a series of filtration mechanisms that clean used water from the fish tanks so that it may be reintroduced into the system in a circular, regenerative fashion. Recycling the water eliminates the need to constantly draw from a water source to feed the aquaculture tanks. In an aquaponics system, the plants take up the nutrients from the fish tank water.

“Jake Ward has an abundance of experience utilizing aquaponics to maximize a strain’s full potential,” says Gillis in her nomination. “Taking a progressive approach and developing a team to think critically and to constantly, continuously improve.”

Most commercial aquaponic systems produce both leafy greens and fish – like salmon and tilapia – for commercial harvest. At Aqualitas, the fish being grown are koi, but they are not harvested for revenue, but as a source of nutrients for the cannabis plants.

“The reason why we use koi is they are hardy fish – they can withstand 28 degrees right down to sub-zero temperatures,” explains Ward. “Their immunity to maintain temperatures is good, they can take fluctuations in pH and they live up to 50 years, and some of them even live up to 100 years.”

Even though they are not grown for commercial purposes, the Aqualitas koi live “the best life,” according to Ward. The company does engage in breeding and R&D for the koi, to ensure optimal performance.

“It’s one thing to do hydroponics – which, at the end of the week you flush your nutrients out and you start all over again,” Ward explains. “This is a little bit different when you have fish, you have to be a little bit more careful about what goes back to the fish.”

Aquaculture technicians at Aqualitas who look after the fish treat these koi almost like pets, Ward says fondly. 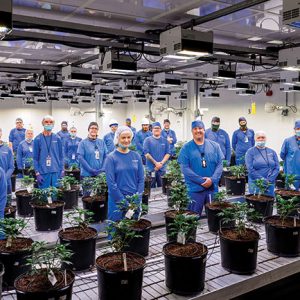 Top: The Aqualitas production team, which looks after both the cannabis plants and the fish in the aquaponics system Bottom: Aqualitas chose koi fish for its hardiness and adaptability. PHOTOs: Dean Casavechia /Aqualitas 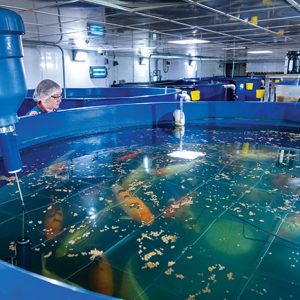 Aqualitas maintains about 85 cannabis genetics in its inventory, 19 of them are growing as mother plants.

Sustainability meets quality
Certified under Clean Green standard, Aqualitas is one of a handful of Canadian cannabis licensed producers that are growing cannabis organically. About 95 per cent of Aqualitas’s cannabis produce are sold as dry flower or buds and pre-rolls under its recreational brand Reef Organics and its medical brand Aqualitas. The remaining five per cent are used for extraction.

Achieving sustainably produced, high-quality cannabis products is not always an easy feat but Ward is demonstrating that it’s not impossible.

“Over the last four years, I can’t express how many mountains we moved and the blood, sweat and tears that came out of it,” Ward says of Aqualitas’s journey to achieve its vision of production sustainability. “But it’s the dedication to health and well-being and sustainability and to have a top quality product on the market.”

Aqualitas’s sustainability story is what drew Ward to the company. He had invested in the company even before he joined the team.

“When you sit down with our executives, still to this day, I get that heartfelt warmness from them. It’s still our motto,” he adds. “It’s still all about our customers, having consistent product, something unique out there – clean, sustainable, not wasting water, we use LED lighting. Those are the things we needed to consider right from day one.”

In fact, when Aqualitas performed an efficiency audit as part of its design development, Ward pushed for an agenda that focused on water and energy efficiency, according to Gillis.

“Our indoor grow was assessed as using less than 50 per cent energy of that used in conventional indoor grows. Our aquaponics system incorporates a closed and decoupled loop that uses up to 90 per cent less water at full capacity in the closed loop portion,” she explains.

Aqualitas’s sustainable design and technology has gained several recognition, including the Clean Tech Energy Award and the Spark Innovation Award. The licensed producer also received a $400,000 energy rebate, the largest in the history of the Energy Efficiency Program, says the Aqualitas CEO, who credits Ward’s good environmental stewardship as instrumental to these recognitions.

A more efficient system allows Ward and his produciton team to focus on quality products. The key, he says, is consistency – consistency in the growing and cultivation process, and in the environment that houses the cannabis plants.

“When I say be consistent, you’re the person who has to be consistent and make sure that you’re defoliating, you’re topping, you’re SCROG netting. You’re doing everything at the same time, every time – watching your environmental conditions, your relative humidity, your VPD, your temperature – all those things play a huge factor,” Ward explains.

The Aqualitas master grower is a big advocate of research and development, looking at new cultivars and phenotyping – all in an effort to constantly improve the quality of their cannabis products.

He cautions, however, that there is a time and a place for doing research and development, and that place is not in the commercial grow rooms.

“Putting in a new cultivar is definitely a challenge because you’re always going to get one that’s a heavy feeder, one that’s a heavy drinker, one that doesn’t like that much light. It’s important to get to know your cultivar, and once you’ve worked with that cultivar then you can dial it in. All those things we do in R&D,” Ward says.

Aqualitas has about 85 cannabis genetics in its inventory, 19 of them are growing as mother plants, he says.

Gillis says Ward’s knowledge and dedication translates to the level of quality of Aqualitas’ recreational and medical cannabis brands.

“While many others do not grow Ghost Train Haze because it is difficult, or simply because the economics don’t make sense, Jake knew and continues to understand that this strain (our leading performer in both medical and recreational) has a level of magic that must be available to our consumers – wrangling this, refining this, and advancing it all along the way,” she says.

The A team
Ward is generous when it comes to sharing his grower wisdom, accumulated over nearly three decades, with the young growers in his team. He encourages them to keep seeking answers to the most difficult questions, and to never be afraid to fail.

He tells his young wards to not give up on the plant. Failure is not the end, he would say, “it just means you found one way that it doesn’t work, so try a different way, a different technique.”

Ward recognizes that a well-functioning grower team is the key ingredient in every successul product. Watching young growers develop and build up their confidence and skill level in cannabis cultivation, Ward feels a sense of accomplishment.

The Aqualitas CEO recognizes Ward’s commitment to his team. “The team is what moves the needle for quality and excellence. Having genuine care and compassion for each of our team members translates into exceeding goals and trailblazing. Jake has worked tirelessly and has been a dedicated and passionate leader.”

Ward’s best advice: Work with the plant. “My motto is, I never tell the plant, the plant tells me. It tells me everything.”