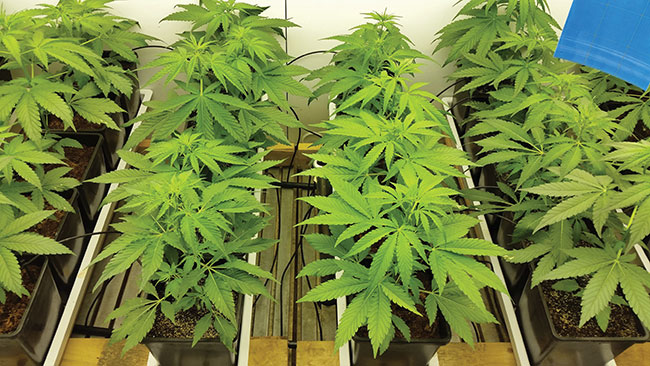 Growers of cannabis are familiar with the terms ‘veg’ and ‘bud’ as the production process has a dedicated period for vegetative growth and bud set, as well as a maturing phase. Most of the time, they have an image in their mind as to how a veg plant should look, as well as how the plant should look at maturity.

Mother or stock plants must stay in the veg state for as long as possible. Once such plants get root bound, a non-veg direction is induced, plants become generative and clone quality may be affected.

Knowing when plants are vegetative
First thing, we will settle with two terms, vegetative (veg) and generative (gen). Figure 1 is a good example of veg plants.

These cannabis plants were grown in a standard, commercial, soilless growing medium and were three weeks old after the rooted clones were transplanted. There were 10 to 12 leaves, fully expanded horizontally, a good dark green colour, vigorous, every node had a branch, and the roots were developing nicely. The plants were regularly fertilized with a complete fertilizer solution with a pH of 5.8 and an electrical conductivity (EC) of 2.0 millisiemens per square centimetre.

The light was at 400 micromoles, per square metre, per second with a daily light integral (DLI) of 25.92 moles per square metre. The lighted period temperature was set at 22 C and was consistently maintained, while the dark period temperature was set at 18 C. Relative humidity was maintained at 65 to 70 per cent, which provided a moisture deficit of 6.0 and 5.2 grams per cubic metre of air and in millibars, between 7.9 and 6.8. These were almost ideal conditions in a growth chamber. The plants were ‘truly’ in a veg state and ready for a gen or bud cycle.

Figure 2 is an example of where things went wrong with the plant’s veg growth. The grower expected to have good veg plants however, they were under ‘management stress,’ due to several things going wrong.

First, is the choice of rooting containers. One can see the use of drinking cups, which appears to be fairly common with smaller operations to save cost, but most of these cups do not have drainage holes. The lack of drainage holes caused the root zone environment to change to the negative side. For example, water logging that result in reduced oxygen levels.

The growing medium was straight peat moss, although it appears that some soil was also added. That complicated the matters further. Peat moss has higher water holding capacity and with the addition of an acidic pH, as well as no drainage holes, the growth could be further affected.

The plant’s lower leaves were yellowing, which appears to be a deficiency of nitrogen. Proper fertilizers were not added according to the growing medium, drainage, and water holding characteristics.

The point is made that there is a right, scientific way to grow the plant in a veg direction and there are old methods, taught by the hobbyists, which are not suitable for large-scale commercial cultivation.

Plants in the veg state produce leaves with good expansion, branching is strong and not thin and spindly. The green colour is a good dark green, internodes are reasonably stretched, and a there is a strong root system. Vegetative plants are more compact and appear vigorous and fast growing.

What does a generative plant look like?
Growers have different ways of measuring if a veg plant has produced and can move to the gen phase. In our research, we have used three weeks after rooted clones, planted in containers as the benchmark to subject the plant to gen direction.

About 8 to 10 leaves and roots have come out of the root ball, and touching the walls of the container is a good start. If the veg state is prolonged to four to five weeks, the plant will grow tall and result in the top part of the plant shading the lower parts and producing poor quality buds. Our measurements showed that if top part of the plants is getting 400 micromoles of light, the lowest leaves will be getting around 150 micromoles. Levels vary based on the setup.

Strategies for  generative direction
Light duration (photoperiod) is the number one input to change from veg to gen direction. Within a week the plant would respond by producing flowers and immature trichomes. It is pointed out that plants will keep growing until buds start maturing. The list of gen inputs can be expanded. The principle is that any stress is a gen signal.Maintaining mild stress is important forgood yields and great quality.

The list can be expanded. It is important to know what veg and gene are. The directions are reversible, where due to inadvertent changes in photoperiod from 12 to 18 hours, can result in a plant changing from the gen to veg direction. We have seen it happen where plants were close to harvest and suddenly big leaves started appearing between the buds. On the other hand, plants can be made gen as early you want.