When Organigram bought its second extraction system in 2017, it knew it wouldn’t be its last. The Moncton, N.B., LP plans to triple its cannabis kilos by 2020, and a big chunk of its sales will undoubtedly come from extract. 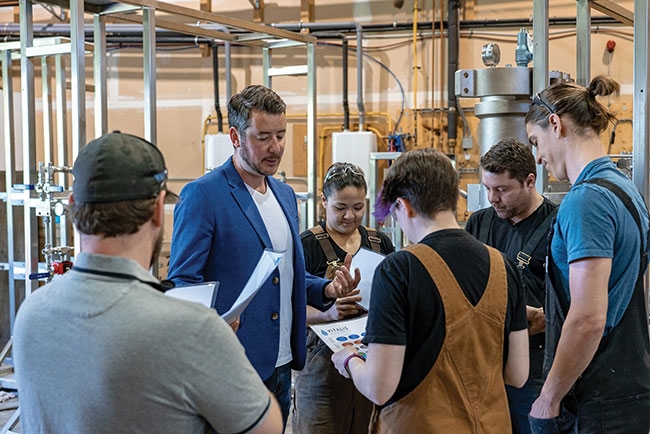 Deloitte thinks that by next year, when edibles become legal, six out of 10 cannabis consumers will choose to eat their cannabis. Vapers will be wanting legal oils in unprecedented numbers, too.

The only questions for him and anyone else wanting more extract will be which method of extraction to add — CO2? Ethanol? Both? — and how many systems they’ll need.

Right now, Organigram uses ethanol and CO2, and both process about 5,000 kilograms of plant material per year.

Purcell isn’t ready to say which method they’ll add next, but they’ll probably always use a combination of the two.

“Looking into the future, there will definitely be importance placed on retaining terpenes in the process, which CO2 gives you but ethanol doesn’t.”

With ethanol, though, producers can extract very quickly, and if they’re looking just to isolate THC or CBD, it’s a good choice.

Organigram isn’t the only LP using both. While CO2 is the “gold standard” and the dominant method in Canada, the recent trend has been to add ethanol to the company portfolio, says Pete Patterson, the co-founder and chief operating officer of Vitalis Extraction Technology in Kelowna, B.C., one of the two biggest manufacturers of CO2 systems in the country.

“You may get less yield with ethanol, but the shear tonnage of hemp that is coming off the field at harvest means you have to extract it quickly,” says company co-founder David Campbell.

Ethanol efficiency
Some ethanol systems out there allow users to extract thousands of pounds of cannabis every day with a single machine. Organigram’s isn’t one of them, but it’s definitely a “workhorse,” says Purcell. They can run it 24 hours a day, seven days a week if they want.

With some ethanol systems, the extraction process is like dunking teabags in teacups, as Lucid Labs’ co-founder Jim Makoso aptly described it recently. You take huge bags of plant material and dunk them in huge vats of ethanol. The only things that can limit efficiency are the size of the bags and the cups.

Once in the ethanol, the cannabis trichomes get pulled into the liquid. After the cannabis is removed, the liquid gets filtered and the alcohol gets purged from the extracted material.

The initial extract usually needs further refinement through distillation after winterization and/or filtration, but still, there’s less labour involved than with most CO2 systems.

The big hurdle to overcome with ethanol is its polarity. A polar solvent like ethanol makes it easy for chlorophyll to get extracted too. The result can be a dark, bitter product that tastes like grass.

Avoiding chlorophyll is all about temperature, says Vitalis’ Patterson. “If you cool the solvent to sub-zero temperatures, you can reduce the polarity of the molecule and reduce the amount of chlorophyll that is extracted.”

Vitalis now manufactures an ethanol extraction system to go along with its CO2 systems, and Patterson says they’ve seen a huge upswing in requests for quotes on ethanol from Canadian companies recently.

CO2: The gold standard
There’s no doubt that CO2 is dominant in Canada and growing. Campbell estimates that there are well over 20 LPs with CO2 systems right now.

He’s been making them since 2013, when he started a company that provides total supercritical fluid extraction services for pharmaceutical, nutraceutical and biotech companies.

“But the technology has been around since the ’70s, and it’s always been good,” he says.

Everything from decaffeinated coffee to fruit extracts to essential oils for perfumes are all now typically made with supercritical CO2 extraction.

The big draws are that the extraction process is clean, green and safe, and that the result is a high-quality product.

That process is more complicated than ethanol, but essentially it starts with pressurizing carbon dioxide until it becomes a supercritical fluid. The fluid then passes through a chamber with raw cannabis, where those treasured cannabinoids get extracted before the fluid is stabilized back into a gas to be used again.

Not only is CO2 non-toxic and non-flammable, but it can pull a wider range of cannabinoids from the plant than ethanol, including THCA, CBG, THCV and others.

It can also pull terpenes, which are the organic compounds that give plants their flavour and smell. That’s big for Canadian LPs, says Patterson.

“In Canada’s current regulations, LPs are not allowed to add foreign terpenes into their concentrates. Therefore, they have to use what is extracted from the plant. CO2 is the best solvent to pull a full-spectrum extract, which includes the terpenes.”

CO2 is popular south of the border too, but the market is split not only by ethanol but by hydrocarbon systems as well. Hydrocarbon typically uses solvents like butane or propane – many of which are banned in Canada – for the use of cannabis extract.

“Almost every company that we interact with in the EU is requesting CO2 only.”

The case for both
So where does all of this leave Canadian LPs, like Organigram, that need to increase their extract output and systems? With a foot in both ethanol and supercritical CO2 fluid, it would seem.

Ethanol is one of the most efficient options available, and it’s ideal for producing quality THC and CBD extracts. CO2, on the other hand, produces a range of premium extracts that retain the same rich flavour and smell profiles of broken nugs of flower. With both, LPs can respond to the evolving array of tastes and budgets out there.

However, for Canada in particular, CO2 will continue to be the dominant method, especially as the country begins to allow the use of vape pens, says Patterson.

“We’ll see a huge uptick in larger CO2 extraction systems to create the full-spectrum oils required for these pens.”

Campbell says the trend to go bigger is already happening. In 2016, it sold a CO2 system to Canopy Growth that had three 25-litre vessels. A recent sale, to an unknown buyer, had four 100-litre vessels capable of processing 325,000 lbs of plant material per year.

Organigram’s Purcell says they’ll decide in early 2019 what they’ll add to their line, but for now they’re on the fence about adding a larger CO2 system or multiple smaller systems.

Either way, he doesn’t see ethanol or CO2 singling the other out in the future at Organigram.

“In manufacturing, it’s always good to have options.”