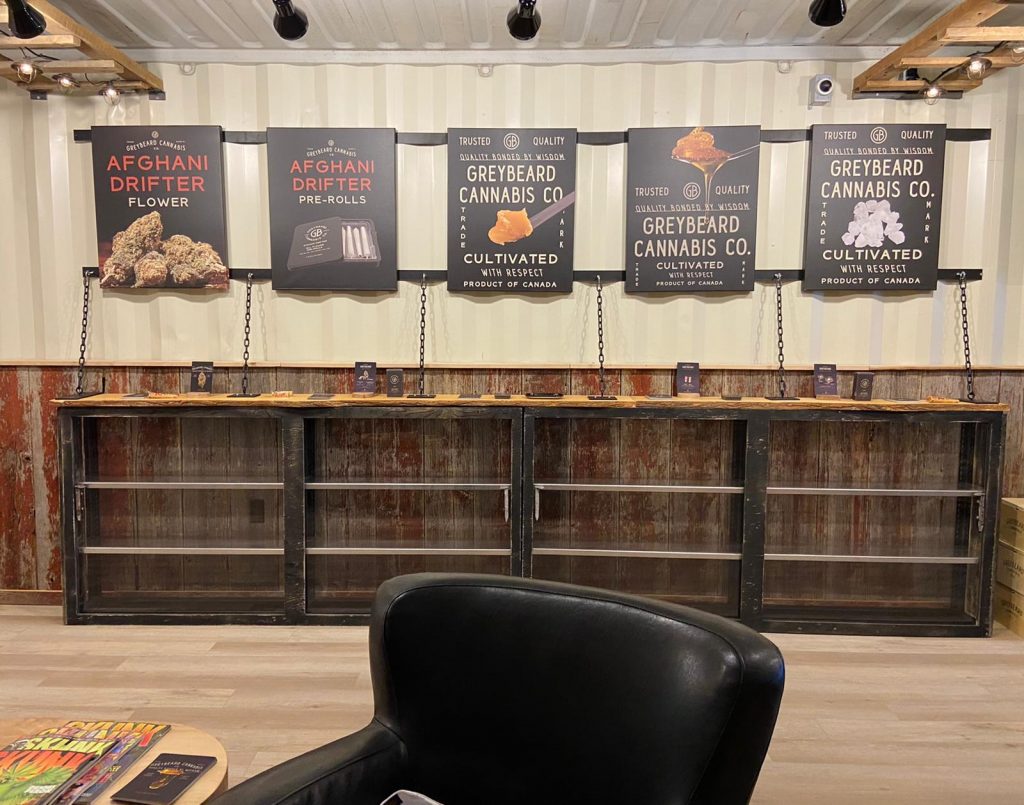 That crew is led by Thrive’s vice president of business development and ethos Bubba Nicholson, who jokes he has the facial hair to match his company’s Greybeard brand, and founder Art Bluhm, who is as spirited about pot as he is about the brisket sandwiches he sometimes surprises farm visitors with.

“We’re not just some boardroom brand that’s out there,” said Nicholson, over a video call made from his parked car during a business trip to Vancouver. “We call it a team of misfits.”

But until recently few knew the misfits behind the brand or how their products were made. That all changed on April 21, when Thrive became Ontario’s first licensed producer to sell cannabis products at the site where they’re made.

The arrangement, which is being piloted or considered by several provinces, is called farm-gate cannabis because it involves taking pot from “seed-to-sale” all at one site and uniting customers with people like Nicholson and Bluhm, who were deeply involved in the journey.

According to the Saskatchewan Liquor and Gaming Authority, farm-gate sales are allowed in the province, but there are currently no retail stores located at production sites.

B.C. is on track for a 2022 launch and several companies are hoping to join Thrive by offering farm-gate in Ontario later this year.

In order to begin farm-gate sales in Ontario, companies must have a retail operator license, a retail store authorization for a proposed location and pass several inspections.

The Alcohol and Gaming Commission of Ontario said in mid-April that it had received 14 retail operator license applications for farm-gate sales and approved six from Thrive, Tweed Inc., Dykstra Greenhouses, Medz Cannabis Inc., Muskoka Grown Ltd. and Level Up Infusions.

It had received nine retail store applications for farm-gate and has so far issued approvals to Thrive and Medz.

Canopy Growth Corp., whose Tweed Inc. brand wanted to start farm-gate at its Smiths Falls, Ont. factory, said it has put its plan on hold until later this year.

However, many are still forging ahead because they believe farm-gate programs help consumers get their hands on fresher cannabis faster, especially in rural areas where the closest pot shop can be a considerable distance away.

With farm-gate, shoppers will learn how their favourite products are grown and processed directly from the people who made them, building relationships, trust, transparency and brand recognition.

These businesses have been hindered by laws that heavily restrict their marketing opportunities and the COVID-19 pandemic, which has forced many stores to operate through curbside pickup with few chances for brands to meet shoppers.

A June 2020 survey of 3,000 Canadian cannabis consumers from the Brightfield Group research firm suggested these factors have weighed on brand recognition. The survey found most pot brands were only recognized by between one and 15 per cent of those questioned and no brand had a recognition rate above 41 per cent.

Farm-gate can tackle this problem because “it’s an opportunity for a savvy company to build a brand” like craft brewers and distillers have, but the model is not without challenges, Gertler said.

“Distilleries are often in these kinds of areas too and many of them have factory stores, which are essentially farm-gate, but there isn’t the same kind of stigma around alcohol, as there is around cannabis,” he said.

However, Robyn Rabinovich, Thrive’s vice-president of strategic initiatives, is confident the company can build a following with farm-gate similar to what wineries experience.

“They come home with a case and they are the biggest champions of those brands because of that experience that they got through learning the process,” she said.

“We’re really excited to have people wear that Greybeard badge of honour.”

Customers who visit will get access to 12 Thrive products and about 10 from other brands, though they’ll have to settle for buying them through curbside pickup until the pandemic subsides.

The community located six hours outside Vancouver started building a growing facility and farm-gate store under the Sugar Cane Cannabis name earlier this year, after it signed an agreement with the B.C. government to allow farm-gate sales of its craft pot products.

Getting to that point involved negotiations between the solicitor general, who was resistant because of the industry’s nascence, and WFLN, which wanted Indigenous rights to be respected, recalled Kirk Dressler, the community’s director of legal and corporate services.

Eventually, the province softened when it saw how serious WFLN was about farm-gate.

“I think that they saw it as a real opportunity, a way for people who are operating smaller operations, who want to transition into the white market to make it viable,” Dressler said.

WFLN recently submitted its Health Canada applications for its growing facility and hopes to open it by July, but the retail store may not ready until several months after, Dressler said.

Chief Willie Sellers is already anticipating it will create jobs, boost tourism and share a secret: Sugar Cane is experimenting with music to enhance the growing process.

He hopes visitors will delight in tidbits like that and feel a deeper connection between the community, its cannabis and the process it took to get farm-gate going.

“Everybody that comes into our store is going to be able to hear about this journey that we went on and how we are growing our cannabis,” he said.

“It’s exciting and it’s fun to think about this cutting edge stuff.”