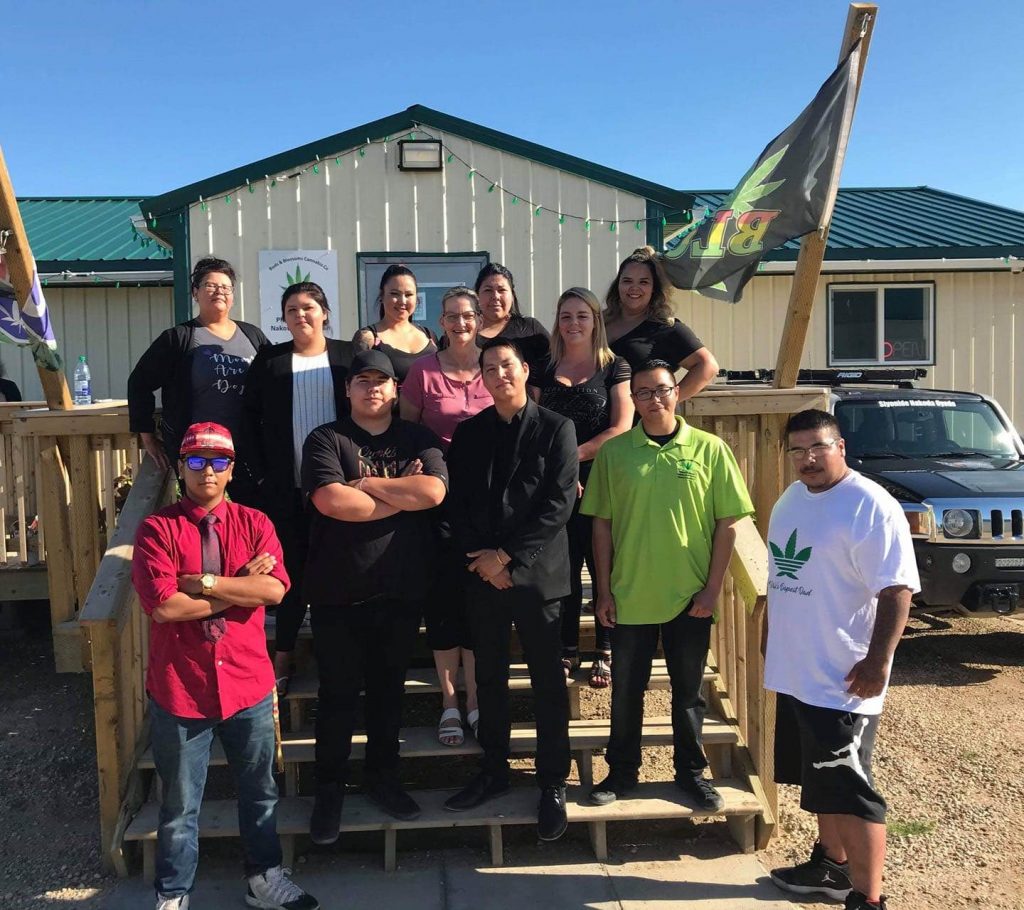 First Nations in the province’s southeast are growing into the retail end of the market – running four pot shops on their reserve lands – but are foregoing the provincially-mandated permitting process.

And the feds keep leaving the ball in the province’s court, saying it’s up to Saskatchewan to regulate, while seemingly not touching the on-reserve pot shop issues.

Yet the issue is black and white for two chiefs who spoke about their communities’ recently opened stores: As signatories to Treaty 4, Pheasant Rump Nakota Nation and Zagime (Sakimay) Anishinabeck have the sovereign right to do as they wish with business on their own lands.

McArthur views the provincial government as a “partner” and a “neighbour,” but says its authority has a clear endpoint.

“Once you enter Pheasant Rump, Saskatchewan no longer exists. I don’t think their jurisdiction applies to our First Nation in any regard,” he said.

He and Acoose agree that Ottawa and the province are leaving the issue in a kind of political no-man’s land, each government referencing the other when it comes to dealing with First Nations’ jurisdictional sovereignty.

Acoose believes it forces Zagime into an economic position of finding “our own grey areas” to make a livelihood. It’s a repeat, she says, of a historical pattern that began with European settlers introducing western-style economic trade.

But those poorly outlined areas also mean gaps to grow into the market.

Legislative holes have left “a niche there that needed to be filled and First Nations took advantage of that – we’re able to develop on-reserve dispensaries,” McArthur said.

Along with Pheasant Rump and Zagime, Muscowpetung Saulteaux Nation and Peepeekisis Cree Nation have opened pot shops on their lands. They remain, for now, the only bands to do so.

All of them are operating without a permit from the Saskatchewan Liquor and Gaming Authority (SLGA), which the province mandated when it created its Cannabis Control Act after the federal Liberals legalized pot in October 2018.

Former justice minister Don Morgan previously told the Leader-Post that Ottawa ought to “control” Indigenous-run pot shops or send in the RCMP “to deal with it.”

The Ministry of Justice declined to provide comments from Morgan’s successor, Gord Wyant. Ministry spokesman Noel Busse said in an email the province’s position is “the federal Cannabis Act and the provincial Cannabis Control (Saskatchewan) Act apply across Saskatchewan.”

The Saskatchewan RCMP’s media team said Mounties here are taking a “measured approach,” including consultation and education “with stakeholders and communities, to address the unlicensed sale of cannabis while respecting the rights of First Nations communities.”

The Mounties declined to say if the province or the federal government have asked them to enforce current laws for unlicensed shops on reserve, because “we do not wish to discourage members of the public from contacting the police.”

Canadian legal and constitutional scholar Dwight Newman says Ottawa bungled up the cannabis law from the start, because they “just didn’t deal with how they saw things developing with Indigenous involvement.”

Newman, a Canada Research Chair at the University of Saskatchewan, said federal legislators could have simply added a provision to the Cannabis Act to “give clarity” on two points: First Nations’ choices to open pot shops on their own lands; and the degree to which, if at all, First Nations are subject to provincial regulations, like the SLGA’s permit requirement.

He said the Liberal government also looks to be stuck in the past – in light of current duty to consult expectations – by not hearing from band leaders how the looming weed law would have affected their communities “to know they needed the clarity on these issues.”

Newman suggested Section 88 of the Indian Act, which pertains to provincial laws applicable to Indigenous people, as one place to start.

Looking to the past for some guidance, especially in Saskatchewan, wouldn’t have been particularly hard, either.

The provincial government and the RCMP grappled with a driven and persistent White Bear First Nation, led by former chief Bernie Shepherd, as it went all in to make Indigenous-owned casinos a thing in the 1990s.

Shepherd and White Bear thumbed their collective nose at spotty provincial gambling laws: In 1993 the band opened the Bear Claw Casino in its golf course clubhouse without a licence from the province.

In 1985, he explained, Ottawa said “the provinces can run with the (casino) licensing piece. Then First Nations showed up and said ‘we want to put casinos in.'”

One of his main research areas is Indigenous gaming in Canada.

Now, with federal and provincial cannabis laws established, “First Nations are ultimately going to enter in the dialogue and say ‘we would like to, not unlike casinos, establish cultivation and dispensaries within reserves,'” Belanger said.

“The provinces are going to push back and say, ‘no, that’s our responsibility in terms of licensing and oversight; you must deal with us.'”

He suspects Pheasant Rump, Zagime, Muscowpetung and Peepeekisis will “start to face a lot of pressure from provincial authorities about licensing and demands that they come to the table so they can further clarify how a very unique jurisdictional environment, as it relates to First Nations, will develop.”

“We invoked the White Bear experience, just because that was a demonstration to us of the injustice that has been inflicted on First Nations through federal and provincial legislation,” she said.

The Indigenous-owned casino example and current cannabis laws show how, Acoose says, governments “legislate us out of participating in the larger economy on our own terms. That’s a form of oppression.”

Those legislative practices have roots in Canada’s settler-colonial past, she says.

She cites promises made in Treaty 4 that sought to allow First Nations people full participation in and benefits from settlers’ newly-introduced economic activity, particularly farming.

The clause in question is often referred to as the “cows and ploughs benefit,” Acoose said, contending First Nations people aren’t allowed that full participation.

“Take it forward to today’s generation. We can’t all farm. Our land base is not sufficient for everyone on reserve to enjoy the benefits of those promises made in treaty.”

Like what White Bear did in 1993, her community has always had to find its own, often unclear pathways “in terms of new economies,” she says.

Thus far Zagime’s shop – called Omagakii, sitting on the band’s land just west of Regina at Pinkie Road and Dewdney Avenue – is providing some of that livelihood after opening in September 2019.

The First Nation has opened a restaurant, Moose and Bannock, next to the shop. Zagime also uses revenue from Omagakii to build its road network at the intersection, called Saulteaux Crossing.

The band owns a building in Yorkton, too, which it has since repaired, thanks to cannabis revenues.

At Pheasant Rump, McArthur said its shop employs 17 band members, still working there through the pandemic.

After Buds and Blossoms opened on Canada Day in 2019, it took about four months of operation to be “in the black,” he said. At six months, there were enough profits to fund community programs, especially for elders.

“Through the winter months, October to March this year, we paid for all of our elders’ utility bills on and off the reserve. We provide quarterly allowances to our elders,” he said. “We also do provide support to our school-aged children for their lunch programs,” using the pot shop revenue.

The two chiefs are now starting to draft documents and provisions for a safety standards association, which would apply to all four First Nations currently running stores.

Acoose says they hope the end result is standards for testing: “How often do we test? What’s the sample frequency? What can we test for? What are the standards in those tests that we can establish?”

When the pandemic subsides, Zagime wants to meet with leaders from the other three communities to work out the details.

She’s also hoping for a “legislative relationship with the federal government, through maybe an exemption in the Criminal Code for cannabis operations on reserve. Without federal legislation that recognizes our own First Nation laws, that makes it quite difficult to operate.”

Referencing White Bear and Indigenous-owned casinos, Newman, the legal scholar at the U of S, says any lack of clarity could lead to “conflict down the road. The provincial government is also going to need to think about the implications of those past lessons (from the 1990s).”

At the University of Lethbridge, Belanger predicts Ottawa will push First Nations to “negotiate with the provinces.”

“First Nations will argue they’re the equivalent of provinces, jurisdictionally, and that the provinces don’t have any over-arching authority within that setting, that they’re relationship is with the Crown, with the feds.”

Though the current cannabis conundrum is challenging and interesting, it’s not really new, he added. “It’s a very simple circus act that Canada has been performing since confederation in 1867. It will be a consistent First Nations-ask of the government to articulate clarity,” hopefully yielding sober clarity.