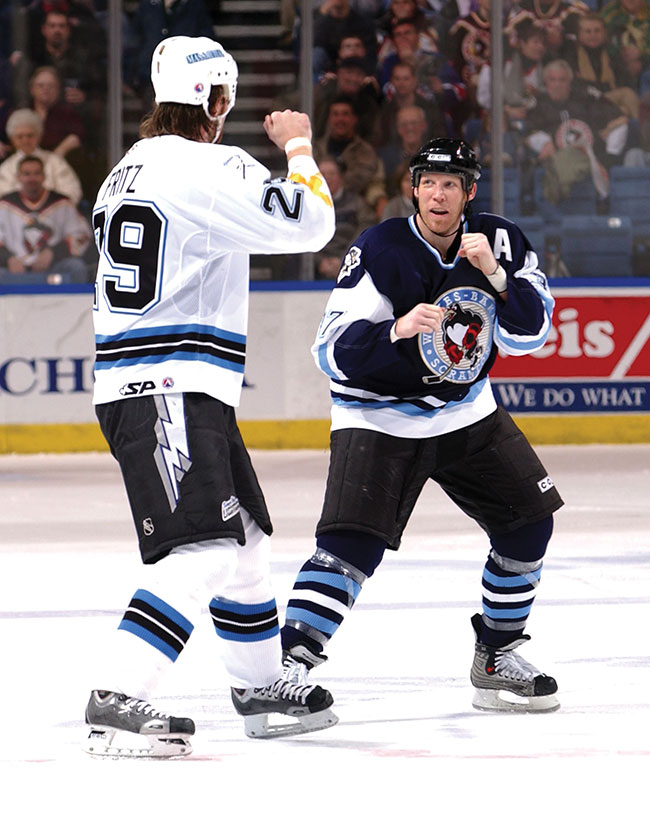 Through 14 years playing professional hockey, Ryan VandenBussche suffered more than 20 concussions and went through 12 major surgeries. Since retirement, he has discovered the health benefits of cannabis as a better alternative to opioids.

There’s an old saying that, unlike the rest of us, professional athletes actually die twice: once when they retire, and once when they finally kick the can. But while it may not initially seem like the most cheerful cliché, former pro hockey player Ryan VandenBussche’s recent foray into the cannabis and wellness industry proves that life after pro sports can be a real blessing – and one he’s all too happy to pass along to those in need.

After a 14-year professional career that saw him log over 600 games across seven different leagues – including more than 300 games in the NHL split among the New York Rangers, Chicago Blackhawks and Pittsburgh Penguins – VandenBussche has found new life as a medical cannabis advocate, as well as the president and founder of New Leaf Canada Inc., a wellness brand and emerging international producer of medical-grade cannabis products established in 2017.

With two new facilities about to begin production, and some valuable strategic partnerships recently solidified, New Leaf is poised to take some big steps forward in the next year. For VandenBussche, it’s a testament to how far he’s come since he decided to hang up his skates.

A tough line of work
VandenBussche’s interest in cannabis was first ignited during his at-times challenging transition to post-hockey life. By the time his career ended in 2007, he had suffered more than 20 concussions and undergone 12 major surgeries, with many bruises and broken bones accrued along the way.

As he puts it, “It was almost like I’d be in multiple car crashes by that point.”

Still sore and seeking a healthier alternative to the opioids that often become a crutch for many professional athletes, VandenBussche caught wind of some new and interesting discussions happening around cannabis use.

“About two years after I retired, I was introduced to cannabis for medical purposes. Before that, I had always just thought of it as a recreational drug – I never realized it had any healing properties until I started doing some research on it.”

Seeing a potential solution to his need for healthier pain management options, VandenBussche obtained a personal production license, and – after teaming up with three other licence holders – had a local grower in his native Norfolk County, Ont., produce for him on a rented plot in nearby Port Dover.

He quickly became a believer in the healing properties of cannabis. In 2017, he purchased the 64-acre farm he had been renting, and began to think bigger about his role as a cannabis producer and advocate.

Big vision, big plans
Once he had completed the purchase of his farm, VandenBussche set to work realizing his vision for New Leaf Canada Inc.

The first step in that process was the construction of an over 32,000-square-foot cultivation and processing facility on the property, which includes greenhouse facilities capable of producing up to 4,875 kilograms of dried flower annually, as well as an on-site extraction facility. In addition to the high-THC strains that will be cultivated in the greenhouses, New Leaf plans to cultivate high-CBD strains of hemp on the farm’s growable acres. The cultivation and processing facilities are expected to be fully operational by the end of the year, with the first hemp cultivation set to commence in the fall of 2019.

In addition to their Canadian operation, the New Leaf team has also established strategic partnerships in Jamaica, securing a master grower, two potential cultivation sites, and a late-stage application for an extraction and processing licence. New Leaf has also acquired a 15,000-square-foot medical-grade production and extraction facility near Montego Bay. In line with its Canadian counterpart, the Jamaican extraction facility is expected to be operational by the end of 2019, pending government approval, with the capacity to process upwards of 225 kilograms of product per day. Going forward, the company hopes to work with its partners to supply local dispensaries and coordinate international exports once they became legal – something that’s expected to happen as early as this year.

“As laws change regarding exports and imports with various countries, that’s really going to help us to reduce overall cost on our products,” says Chris McCullough, business development manager at New Leaf. “We’re very excited about what we’ve been able to put in place with our Jamaican counterparts because we feel this is going to allow us to reach a far greater amount of patients and clients in the long term.”

All told, New Leaf’s sister sites in Ontario and Jamaica have it poised to become a formidable producer of cannabis and cannabis-related products. More important than any volume they might produce, though, are the people that New Leaf is hoping to reach with its products, and the information they intend to share.

VandenBussche played for the Chicago Blackhawks from the late 90s to the early 2000s.

New Leaf has established strategic partnerships in Jamaica, including acquisition of a 15,000-sq.-ft. production and extraction facility near Montego Bay.

Turning over a new leaf
Though production and product creation are important components of its business model, the leadership team at New Leaf also views educating potential patients and customers as one of the primary goals of the company.

“For us, advocacy and education are some of the most important principles that our company will be offering to people,” says McCullough. “When you have a substance that’s been under prohibition for almost 80 years, the reality is that the benefits of this product are just starting to emerge in today’s research, which has been accelerating quickly with legalization here in Canada. We believe that through technology and research, we can provide advocacy, support and alternative medicines to those that are currently on traditional pain treatment regimens.”

In line with these principles, New Leaf has engaged with stakeholders in the medical field to help further research and development effort, and has relied on the expertise of its chief medical advisor as they work to develop – and educate potential customers about – safe products and practices.

“Dosing can pose a huge problem, as an example, because there are many people who aren’t sure how to properly dose themselves,” says VandenBussche. “Our chief medical advisor, Dr. Simon Sutcliffe, is working with us on developing dosing guidelines for different ailments.”

“He’s helping us devise the actual product line of wellness products we’ll be delivering,” McCullough adds of Sutcliffe. “He’s been very exciting to work with, and adds a great dynamic to our team.”

New Leaf have also sought to amplify its message and expand its reach through a strategic partnership with Athletes for Care (A4C), a U.S.-based advocacy organization that aims to educate current and former professional athletes about the potential benefits of cannabis as a health and wellness alternative.

As the founding sponsor of A4C’s Canadian branch, VandenBussche believes New Leaf has the power to change the lives of athletes struggling with the transition to life after pro sports, a challenge that remains close to his heart and his vision for the company.

“I know there are a lot of my former teammates and former players that I’ve met who are suffering in silence – guys who can’t throw out their bottle of opioids,” he says. “We need to bring more awareness to the fact that there are other options for them.”

McCullough feels that New Leaf’s partnership with A4C has the potential to raise awareness about cannabis and wellness among the general population due to its association with some celebrated and recognizable faces.

“We believe these athlete-ambassadors will be key when it comes to advocacy and education about cannabis as a wellness alternative,” says McCullough. “I think they have the potential to really change some of the stigma around these products for non-users. That’s key for us.”

A big year ahead
With so many unique and innovative initiatives in the works, it promises to be a busy and exciting year ahead for New Leaf. For McCullough, though, the real excitement lies in the people he finds himself working with, and the shared goals they’re working toward.

“What’s exciting to me is the team that’s been assembled to help reach Ryan’s goal of achieving wellness through alternative choices. Having patients and clients understand this as a wellness product, and find something that works for them – that’s the goal here.”

Taylor Fredericks is a writer based in California.