Deb Singh is a 39-year-old mom who faces the horrors of trauma every day in her work as a counselor helping survivors of gender-based violence at the Toronto Rape Crisis Centre. She also suffers from sciatica and back pain – and she is a regular cannabis consumer. 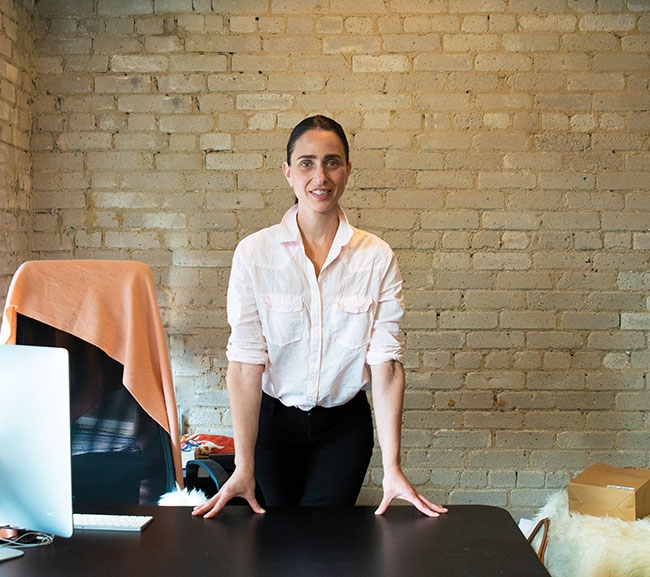 What women want: As the first female CEO of a publicly traded cannabis company in Canada

“In a staff meeting, I realized that all of us either take some sort of sleeping pill or smoke weed before bed. There’s no balance when you’re doing anti-violence work on the front line,” Singh is quoted in 48North’s Latitude campaign booklet. The Northern Ontario-based licensed producer’s Latitude platform is intended to change the conversation and help eliminate the stigma on cannabis use by women.

Singh is one of several women from all walks of life – artist, entrepreneur, employee, social worker, mom, daughter – who are telling stories about the role cannabis plays in their lives, pushing them out in the open and hoping to put an end to the secrets that have been forced by prohibition and propaganda. It’s how 48North is connecting with the female audience, the main focus of the cannabis producer’s branding and product development strategy.

“We believe this storytelling vehicle is really critical to provide information to women,” Alison Gordon, CEO of 48North tells Grow Opportunity. “Our market research has showed us that women want to know more… It’s about how women incorporate cannabis into their lives and that, to us, is a really big way to build our relationship with women cannabis consumers.”

Gordon has had a lot of experience on women’s health and wellness issues and in engaging this audience, having previously co-founded Rethink Breast Cancer – a movement empowering women with breast cancer through education, support and advocacy.

She believes cannabis as a health and wellness product will resonate with women in a huge way, and that’s the journey she wants to take her company on.

Market opportunity
Current market research on cannabis use indicates the market is at an almost 50-50 split between female and male consumers. Catering to 50 per cent of an estimated $8 billion market is a no-brainer.

“We have an opportunity to own a market that hasn’t really been engaged, and that is the female market. As one of the few female CEOs (in the industry) and the only female CEO of a public cannabis company, I knew that we could authentically speak to women and really work and create the products and brands that women will want and love out of this industry.”

The female market is also distinguishing itself from its male counterpart, as they are more likely to see cannabis as a health and wellness plant. They will likely consume cannabis through less conventional means, like edibles and infused products (skin care, cosmetics).

“They are more interested in products and brands that will (eventually) come out versus smoking the flower,” Gordon says. “Women really do want options for dosing and consuming, not just smoking.”

This is where female-focused cannabis marketing and product development will likely take place – at least, that’s where 48North will be hugely investing in.

“To me (48North) is really a health and wellness company,” Gordon says. “We are very much interested in the cosmetic and skin care space. This is one of the fastest growing aspects of the cannabis business in the U.S. right now – CBD. People now understand that it’s anti-inflammatory, antibacterial, it has all sorts of properties.

“In time, you will see that, just like people take probiotic, CBD will be a big part of people’s overall health regime. From a skin care perspective, it has so many great properties to be able to help women.”

Gordon believes 70 per cent of her company’s cannabis sale will come from extracted products and brands. Current regulations in Canada do not yet allow for edibles and other cannabis-infused products, but the federal government has pledged this is coming within a year of the official legalization of adult recreational use. In anticipation, licensed producers are investing in equipment and facilities designed to provide them with extraction capabilities.

Good & Green’s cultivation and production facilities include an approximately 46,000-sq-ft. indoor grow in Brantford, Ont., and a 100-acre farm in southwestern Ontario. Combining this with 48North’s existing DelShen Therapeutics facility in northern Ontario brings the company’s production capacity to at least 45,000 kilograms of dried cannabis per year.

“For us, when you’re talking about extracted products and brands… you’re not taking flower from an indoor facility and extracting from that – it’s too expensive. Outdoor (grow) is really a huge opportunity to be able to have low-cost production on what ultimately be an extracted product. We are looking forward to that,” Gordon explains.

By women, for women
“The future of cannabis is female,” is a tag line on the website of Eve & Co., a licensed cannabis producer in southern Ontario. Located in Strathroy, about half an hour west of London, Ont., Eve & Co. is hoping to break into the lucrative female market. Eve & Co. was founded by Melinda Rombouts, who is also the company’s CEO. From the get-go, Rombouts knew the female market will take priority in her company’s marketing strategy.

“We have always been very excited about the products that have done really well that are female-focused in the grey market in Canada, as well as Colorado and California,” Rombouts says. Female-focused marketing is how Eve & Co. plans to differentiate itself from what has traditionally been a male-oriented marketing and branding paradigm in the Canadian cannabis industry.

Eve & Co. wants to “change the story of cannabis” and help women, especially mothers, become more confident and comfortable walking into a cannabis store – and not feel weary or embarrassed about it, Rombouts says.

What women want: As the first female CEO of a publicly traded cannabis company in Canada

“Just like they buy a bottle of wine in order to relax at the end of the day – that has always been acceptable. We want women to feel OK when they walk into a cannabis store or use cannabis for the exact same purpose – to look after themselves.”

The stigma associated with cannabis use is bred by decades of propaganda and prohibition, and it’s especially real for adult women who have found benefits from cannabis but have had to keep that secret in fear of public scrutiny – even face the risk of losing their job or their children because of it.

Rombouts says her company wants to steer the conversation to empower women to take their health and wellness into their own hands and not be bogged down by stigma. The good news is that attitudes toward cannabis are changing. Older people, particularly, are looking at cannabis in a new light, seeing its anti-inflammatory benefits as a remedy for aches and pains.

“We are seeing people who were very against cannabis, and once they actually do the research and see the wellness and the positive effects of cannabis, I think people are much more open-minded,” she says.

Eve & Co.’s current 220,000-sq.-ft. greenhouse facility is undergoing massive expansion to bring its total production size to a million square feet capable of producing 50,000 kilograms of cannabis per year. Rombouts wants her company to be among the top 10 largest producers in terms of square footage in Canada. It has current supply agreements in place with Ontario, British Columbia and Newfoundland and Labrador.

With edibles and other cannabis-infused products on the horizon following legalization, Rombouts is hopeful her company’s female-focused market strategy will differentiate itself in the market.

“There are companies out there with billion-dollar market caps and they have huge advertising and marketing budgets. We are not up there where they are, but I am hoping that people will recognize what we are trying to do… We bring an authentic attitude towards our brand. This is where we truly understand women and women’s needs,” Rombouts says.

Accessorize
An Ontario-based online retailer of hand-made, high-quality cannabis accessories, is also finding a good niche in the female market. Milkweed is a craft producer of cannabis lifestyle accessories, featuring works by Canadian artists and designers.

Its co-founder Emma Baron, who worked at a rheumatology clinic, felt there was a gap that needed to be filled in the cannabis accessories market.

“I have a background of makers in my family – weavers, carpenters – that made-in-Canada lifestyle choices. I didn’t feel like there were a lot of things that represented that in head shops and in cannabis accessories,” she says. “Between that and seeing some of the patients in the clinic who are hesitant to use their medical cannabis because of the way they (tend to) look – like a vaporizer covered in weed leaves, things of that nature.”

This inspired the Dryden, Ont., entrepreneur to launch Milkweed, featuring accessories and collections designed for elegance and durability, and subtlety that’s not usually found in items one might find in traditional cannabis shops.

This is probably why about 75 per cent of Milkweed’s customers are female.

“Female-oriented designs in cannabis products and accessories are really ramping up right now,” Baron says. “Women make 80 per cent of the household spending choices. Moving forward, as cannabis becomes a retail commodity and slowly eases into the mainstream, I think women are going to be responsible for bringing home the milk – and the cannabis.”

Milkweed’s rolling trays, for instance, has a nice, classic look with very little indication of its intended purpose. “It has beautiful function for a rolling tray, but you can also dress it up as your prosciutto platter. It’s so flexible and fits into the lifestyle in a more holistic way,” Baron explains.

Baron also ensures each product offered on Milkweed’s online store is durable and can stand the test of time – an aluminum mushroom cannister or a leather road trip kit that grandma can pass on to her granddaughter someday.

Baron, too, sees the potential of cannabis for health and wellness and wants to dive into infused products in the future.

“We are keeping our fingers in the pulse of what is happening. It’s interesting right now with medical and rec (on each side of the industry). Ultimately, it’s going to be a Venn diagram with wellness in the middle. We will be able to take a lot of the learning from the medical into recreational as an industry on a whole.

“I am excited to get into the infused market as our second-phase. We are working with someone who has been growing botanicals for skin care in the Niagara escarpment for a number of years now. Working cannabis into that is a beautiful holistic approach.”

Women leaders
Alison Gordon of 48North and Melinda Rombouts of Eve & Co. are just two in a growing list of women leaders in Canada’s cannabis industry. The usual challenges for a woman in a male-dominated industry are there, but so are the opportunities.

“There is definitely more competition for the financial dollars available. I am not sure that women leaders are supported the way that they should be and I think, partly, it’s the view of women as leaders,” Rombouts says.

Her advice: “Start somewhere. Try and be in as many meetings and conversations as you can in the company… soak up as much information as you can and recognize that because it’s a new industry, there are many people who have the opportunity to work in these roles so start where you can and be willing to grow.”