Features Production
Greenhouse or Indoor Farm: That is the Question

It is often assumed in the cannabis industry that greenhouse production, rather than indoor production, will become the norm, especially since costs can be substantially reduced by using the “free power of the sun.” 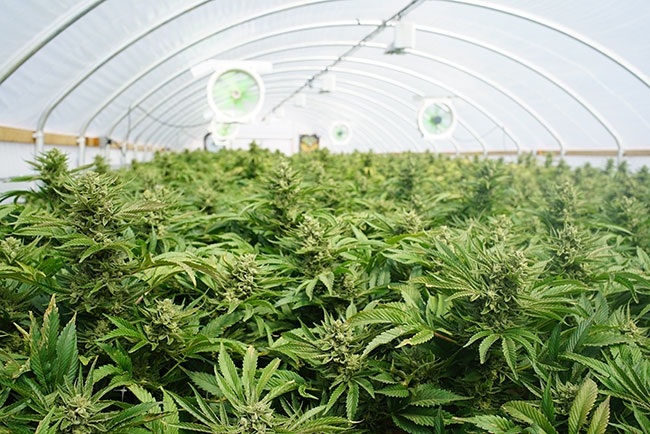 Lighting Up: Although greenhouses use fewer lights than indoor farms It is often assumed in the cannabis industry that greenhouse production

However, in reality, the sun is not free. It comes at a cost of having lower control of the growing climate. Whether or not that cost exceeds savings from using less electric lighting will depend on factors like farm location, outdoor climate, and customer segment, just to name a few. Rather than focusing solely on capital and operating expenditures, growers should focus on the value of the business, which depends on costs but also revenues, the variability of those revenues, and something called “option value.”

Consider Costs
The most common argument for a greenhouse is that it lowers your energy and lighting costs. There are several reasons why this argument is not complete. For one, greenhouses are poorly insulated. The most efficient greenhouses have R-values of around 1.90, whereas indoor farms can have R-values that exceed 40. If your greenhouse is located in a place with cold, dark winters, this could mean you will spend more on additional heating than you will save on electricity.

Greenhouses use fewer lights, but the exact savings is highly dependent on location. Daily Light Integral (DLI) refers to the number of light particles received during one day in a particular location. Cannabis typically needs a DLI of around 35 to grow well. Indoor farms install enough lights to provide that level consistently throughout the year. Advanced greenhouses use supplemental electric lighting for periods when the sun provides less than the required DLI. For instance, in January in Vancouver, the sun provides an average DLI of around 2. As little as 60 per cent of that light may actually reach the plants inside a greenhouse, implying a DLI deficit of 34. So, in order to maintain stable growing conditions all year around, the grower needs to install nearly the same lighting equipment as an indoor farm.

Managing Risk
A greenhouse grower may be tempted to install fewer lights, since, sticking with the Vancouver example, for the other nine months, the DLI is at least twice January’s level. But then at least one harvest will have yields and product quality characteristics that are inferior to the others, reducing revenues. At the same time, supplementing sunlight with electric lighting causes significant quality variations that can frustrate customers that demand repeatable and consistent product experiences. Josh Gerovac, a horticulturalist at Fluence Bioengineering, explained:

“We’ve found that variations in the production of cannabinoids (e.g., THC and CBD) are most influenced by spectral light quality, and to a lesser degree light intensity. The proportion of radiation being delivered from a supplemental light source relative to solar radiation significantly varies throughout the year in a greenhouse. Depending on the spectra of supplemental light, the overall light quality being delivered to the crop could be completely different during winter as it is in summer, which can cause significant inconsistencies in cannabinoid production.”

Increased fluctuations in internal climate increase the risk of pest and mould infestations. Research has shown that temperature and relative humidity can vary significantly throughout a greenhouse because of non-uniformity in light distribution, and changes in temperature as you move closer to poorly insulated walls. These factors will also change rapidly as solar radiation fluctuates with the time of day and weather. Also, the greater the variations, the greater the risk of pest and mould outbreaks. Internal climate variations exist in indoor farms as well, but more uniformed light distribution, better air filtering, and a much higher R-value make them easier to manage.

Revenues
The value of control will also vary with the customer segment. For instance, if your target segment cares more about price than the quality of the flower, or prefers oil, then control will matter less. If your customers care more about flower quality, then control will matter more. A non-scientific survey of several dispensaries in Vancouver revealed that these retailers believe that indoor grown cannabis sells from anywhere between 10 to 50 per cent more than greenhouse grown. This is consistent with data reported for the U.S. by The Cannabis Benchmarks Report, which shows that indoor grown flower consistently sells for between 20 and 30 per cent more.

Option Value
Under certain conditions, an indoor farm will create relatively more “option value.” This is the financial value created by decisions today that increase the number of options we will have in the future. For instance, if the farm is located in an area where it is difficult or costly to expand, growing in a warehouse with LED lights gives you the option to expand upwards, increasing revenues per square-foot of building footprint. Moreover, having more control of light placement and more uniform plant sizes and shapes creates more choices for automation. Finally, the price of LED lights is expected to drop exponentially over the next few years as their efficiency rapidly increases. An indoor grower will benefit more from those technological improvements than a greenhouse grower.

In the end, any comparison of the two growing technologies needs to extend beyond the cost of lights and electricity. The value of a business depends on costs, revenues, risk, and the flexibility to make choices in the future. Those factors vary considerably from one business to the next. In places like Santa Barbara, Calif., a greenhouse is clearly superior, but Canada has cold, dark winters and the lowest electricity prices in North America. So, compared to places like California or Colorado, the likelihood of an indoor farm being the right choice is simply going to be higher here.

James Eaves is an agricultural economist and professor in the department of management at Université Laval. His research focuses on technology trends in the cannabis industry and methods for increasing the profitability of growing in control environments.