It’s been over a dozen years now since Nathan Woodworth started growing legal cannabis for himself as a way to deal with chronic migraines. 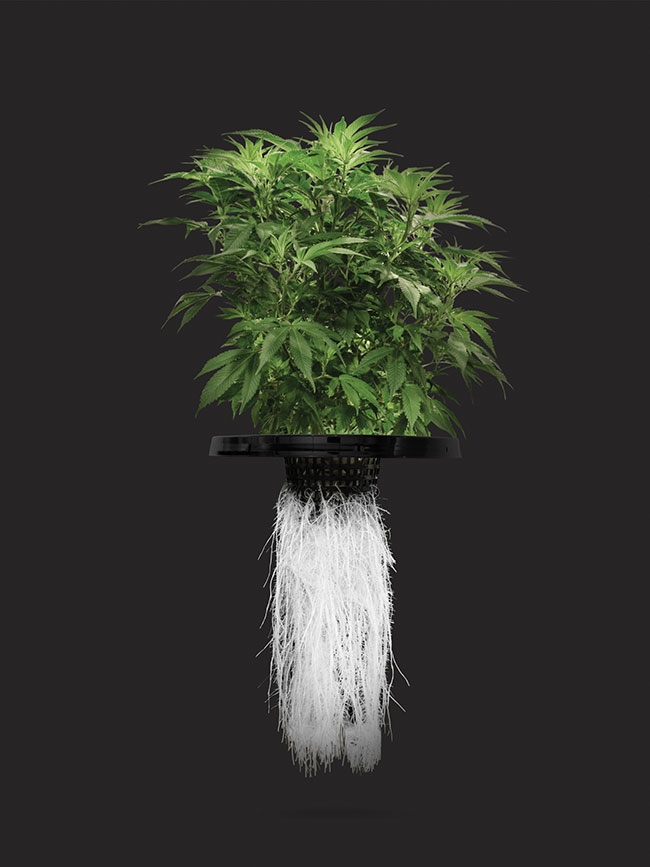 In an aeroponic system

It was a good move.

Not only did those early buds help relieve the throbbing headaches he had been having 98 per cent of the time, but they led to a now-fruitful deep-dive into how to best grow the stuff.

By the time home-growing was infamously outlawed in 2013, Woodworth, his wife and his brother had tried almost every cultivation method currently being used (and a few that aren’t).

Eventually, though, they landed on aeroponics, a futuristic-like method that uses no medium for the roots. The reason they liked it most, says Woodworth, is because it does one of the best jobs of solving — at least partially — what they call “the data problem.”

“Within a plant system, you can’t see and measure everything that’s going on. There are hidden variables, like what’s going on in the substrate. Aeroponics unlocks that next-level data, however. All of a sudden, we can look past the substrate and we can see what the plant is actually doing within the system,” Woodworth explains.

Unearthing aeroponics
For the aeroponically uninitiated, picture this: On top of a grow table, flats of tightly-spaced cannabis plants. Under the table, dangling tentacles of white roots being misted with re-used nutrients and water. Nearby is a reservoir where that water is stored and tested.

The method has been around since the 1920s, but it’s really been refined and popularized since the 1990s, when NASA funded a number of aeroponics projects aboard the space shuttle and International Space Station. Today, it’s being used to grow a variety of plants, including vegetables like leafy greens, carrots, lettuce and others.

This method is more popular with cannabis growers south of the border, but it is catching on in Canada, particularly with medical marijuana producers. In October, for instance, Just Kush announced that it had completed the first construction phase of a facility in the Okanagan Valley in British Columbia that, pending ACMPR approval, would include an aeroponic system. Saskatchewan’s Agro-Greens is also reportedly using aeroponics, as does Alberta’s RMMI Corp., which thinks it will be capable of producing 8,200 kilograms of aeroponically-grown dry product and 1,800 litres of oil annually, when its facility is fully populated with aeroponics equipment.

The biggest player, though, is Woodworth’s company, James E. Wagner Cultivation (JWC), a licensed producer based in Kitchener, Ont. The company’s first facility has seven grow rooms and produces around 1,500 kilograms of medical marijuana per year. Its second facility, which is expected for completion by the end of 2019, will have over 140 grow rooms and produce about 28,500 kilograms per year.

What’s the big deal?
There are a few reasons why these Canadian LPs are banking so heavily on aeroponics, and one of the big ones is risk reduction. When you don’t use soil, where a large percentage of contaminants like pests and mold enter a grow operation, that contamination risk is severely mitigated.

Another advantage related to this method is that with aeroponics, plants are less prone to pathogens, especially root rot pathogens, says Dr. Youbin Zheng, an associate professor at the University of Guelph’s School of Environmental Sciences.

At RMMI Corp., they’ve decided to use an aeroponic system developed by California-based AEssenceGrows (the other major one being used in the industry is made by Avid Growing Systems in Niagara Falls, Ont.). Based on their initial testing and research, RMMI has found that the AEssenceGrows system could give them higher yields in shorter growth cycles, meaning they could squeeze in one or two additional harvests annually.

Their system also uses about 98 per cent less water than traditional methods because the water is recycled throughout the system. Plus, the set-up allows them to stack their racks. “So even though our current facility is about 23,000 square feet, the site can accommocate the equivalent of 330,000 square feet of cultivation space when fully expanded,” says George Jurcic, the company’s director of corporate development.

As for the economics, Jurcic says that more capital cost was needed up front to pay for the system relative pots and soils, but that they believe payback will be fairly quick. They’re also confident they’ll be able to get their cash cost per gram well under the $2 industry average — likely under $1, in fact.

Woodworth also sees those economic benefits, and believes that the proprietary aeroponics system they developed at JWC, called GrowthStorm, “can produce the best quality at the lowest cost, no question.”

In an aeroponic system

GrowthStorm was engineered specifically for cannabis, Woodworth says. Most traditional aeroponic systems aren’t designed for the total root volume and mass of plant that can accumulate over the total lifecycle of a cannabis plant. This one has been, and has also been built in a way that more easily allows growers to deal with plants on an individual basis, adds Woodworth.

If you were to walk into one of JWC’s grow rooms, you’d see two plants grouped together on a single tray in their own separate enclosures. There’d be two trays to a table, and all of the tables would be completely mobile so that staff can move them and rotate them in order to completely assess the health of the system.

“It’s the difference between your normal street car and a Formula One race car,” says Woodworth. “Cannabis needs to be treated in a particular way in order to perform to its maximum extent, and this system does that.”

Nutrient needs
If we keep the Formula One metaphor going, like a race car, cannabis also needs high-grade inputs. This is especially true for aeroponically-grown cannabis because one of the biggest challenges is maintaining proper root culture.

In a traditional soil culture, roots naturally decompose and return to the soil. With aeroponics, there’s nothing to mediate that exchange. Plus, roots produce a mucilage that doesn’t interfere with things when using a substrate but can when using aeroponics alone. Thus, aeroponic growers need to use a highly complex nutrient solution to ensure the long-term efficacy of a system.

This is why JWC has spent a lot of time and money developing a unique dual droplet system wherein they’ve de-streamed their nutrient solution into two different chemistries. That solution is delivered into a single root mass using two different droplet sizes.

“This creates a unique environment and a unique interchange of chemistry with the root mass,” says Woodworth. “Root health is vastly improved, as are all plant health metrics across the board. We’re seeing growth which is unprecedented.”

Proper water treatment is also key to avoiding the particles that can clog the nozzles that mist the roots, adds Zheng.

“If you have a small-scale set-up, it’s not a problem because you can quickly see that a nozzle is clogged by debris and change it. But nowadays, with people producing acres of cannabis, how often would they check? If they don’t check enough, the plant won’t get the water it needs.”

Aeroponics is one of the more complex ways to grow cannabis, but the advantages far outweigh those challenges. And not only is this method here to stay, but more producers will likely be exploring and using it in the years ahead – not just for cannabis.

“The total efficiency of [aeroponics] is so great that its impact on the environment, on the world we live in, is the most minimal of any agricultural practice available,” says Woodworth. “In the cannabis industry, it’s one of the most powerful tools at our disposal. But it’s complicated and difficult to understand, so the more we talk about it, the more we write about it, the easier it will be to see its value.”

Jordan Whitehouse is a freelance writer based in Vancouver.

Related
Cannabis investors hear from Gene Simmons
This is Grow Opportunity
Examining trends in extraction
Nurtured by nature: the process behind organic growing