The most pressing security concerns in the cannabis industry 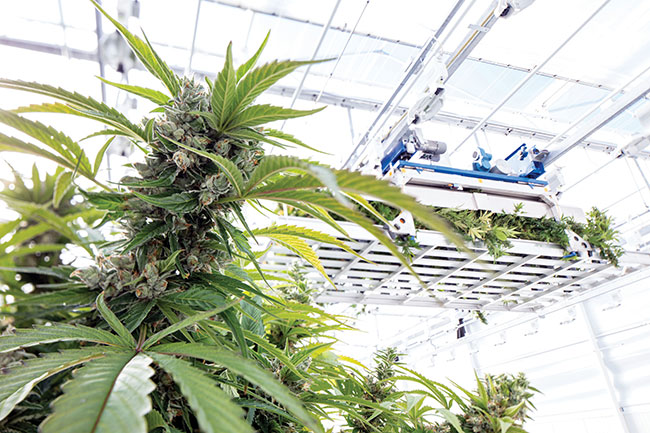 Theft of intellectual property, such as an LP’s genetic material, is one of the biggest internal threats for cannabis producers. (Photo: Aurora Cannabis Inc.)

When the Government of Canada decided to legalize the cannabis industry, there were many questions related to security and the potential criminal activity that would result from the production, transportation and sale of cannabis products.

“The degree of crime that was expected with the legalization of cannabis never materialized to the extent that the federal government predicted. However, this does not negate the fact that there’s an emerging risk of crime to the cannabis industry,” says Mike Soberal, senior director of corporate security at Aurora Cannabis, Inc.

Soberal notes there is an existing and growing risk of organized crime penetrating the inner workings of the cannabis industry.

“It’s certainly a difficult target to breach but through careful observation and by learning the processes at different cannabis companies, weak spots may be identified,” he says.

While current Canadian regulations don’t dictate the experience required to fulfill the position of head of security at a licensed cannabis producer facility, Soberal says it is crucial to have someone with a strong security background in this role.

“Whether that’s through a certification, such as the Certified Protection Professional (CPP) or previous law enforcement experience, having an extensive background in security is necessary to ensure your team is vigilant and able to prevent any opportunity for organized criminals to strike and infiltrate the industry,” he says.

“That’s no different than the battle I fought in my years in corporate security,” he says. “Security professionals are always trying to position themselves to show what the value proposition is that they’re bringing to the organization, and I think the cannabis sector still needs maturing in that respect as far as leadership is concerned – to understand the importance of a very integrated security program.”

Doige says retailers and licensed producers (LPs) need to understand the potential risks within their companies, which can be done by hiring security professionals who can identify those risks and offer solutions to help mitigate potential issues.

“I think, to a large extent, many of those requests are being shelved and are being met with, ‘Look, what’s the minimum we need to do to pass regulatory requirements?’ Organizationally, that’s the biggest hurdle,” he says. “It’s not just about being compliant. If that was the case, then there wouldn’t be any security programs other than what is mandated by government. But having a risk-based approach to a security program is the key to success in organizations.”

Internal threats
One of the biggest areas of concern for LPs is internal theft, whether it’s theft of intellectual property, such as with genetics, or the theft of products.

Two ways to help mitigate some of the internal thefts are a focus on enforcement and being diligent with random searches, as well as doing security town hall meetings that require mandatory attendance for each employee.

“We would go through all of the responsibilities that every employee has in regard to securing the facilities and the product, and making sure it’s not diverted into the illicit market, which has always been a big concern for all of us,” Doige says. “That potential for internal theft, whether it’s just being used for personal use, or theft of genetic materials that can go to a competitor, those are certainly two areas of concern on the LP side.”

Robbery prevention
When it comes to the smaller retail shops, the owners typically do not have the assets of the larger corporations and do not have access to the same level of resources or security expertise.

“That’s where I think you’re going to see additional robberies and violent acts on the retail side of things,” Doige says. “I’m quite pleased to see that many jurisdictions have loosened the regulations on window coverings, for instance, because that was always a big issue for us as security professionals in the cannabis industry on the retail side: giving somebody complete anonymity when they enter a store to lock the door and commit a robbery completely undetected because the windows are all covered. That was a big hurdle to overcome.”

Road risks
While many LPs have tight security inside their production facilities, loss and theft of cannabis products during tranport pose a significant threat, Soberal states.

“It’s all over the map as far as the regulatory regime is concerned,” Doige adds. “There are such stringent procedures and regulatory frameworks around the production, storage and sale of cannabis products, but anyone from Canada Post to Purolator to Pineapple Express is delivering this stuff.  There are no security requirements around bulk transport.”

He says transport trucks delivering cannabis have been hijacked and there are no specific regulations around it to assist producers or transporters.

“I really think it puts the industry at jeopardy, as well as the transport folks. I’m not saying it needs to be all armoured because it’s just not practical with the amount of product that’s being moved, but I’m hoping that the review of the federal regs this year comes out with a little more consistency in respect to bulk transport of cannabis products,” Doige says.

Staying fresh
Soberal also recommends keeping up to date on current regulated protocols and any new trends, regulations or changes within the industry.

“One way to do this is by networking with colleagues within the industry,” he says adding this will allow organizations to stay on top of best practices and global standards.

Doige says having the heads of security at your organization be part of a peer group can help with keeping a pulse on the latest threats.

Fake weed
Lorne Lipkus, founding partner of Toronto-based law firm Kestenberg Siegal Lipkus LLP, says counterfeit products are another security risk that the cannabis industry needs to consider. Lipkus regularly litigates a wide variety of anti-counterfeiting cases including copyrights, trademarks, and industrial designs. He says the counterfeiting of cannabis packaging is an area of concern, as well as the government-required stamp on the package, which helps identify that it is authorized and legitimate product.

Lipkus says counterfeiting is showing up more and more on the edibles side of the cannabis industry, and it poses a serious risk to consumers.

“One of the problems police are having with edibles is that people are taking the edibles and putting fentanyl in them. What you think you’re getting, isn’t what you’re getting,” he says.

To help battle counterfeit packaging, Lipkus says a secure supply chain that people can rely on is important. He says the government needs to embrace using technologies on cannabis packaging to help show consumers that what’s inside is the real product, not unlike the technologies used to identify legitimate money and passports.

Organized criminals could still counterfeit government stamps, and they will potentially fool some consumers, so it is important to educate the public on what to look for when purchasing cannabis products.