Features Production
Growth is in the air

As cultivators and consumers await the official legalization of recreational marijuana in Canada on Oct. 17th, opportunities grow for HVAC contractors. 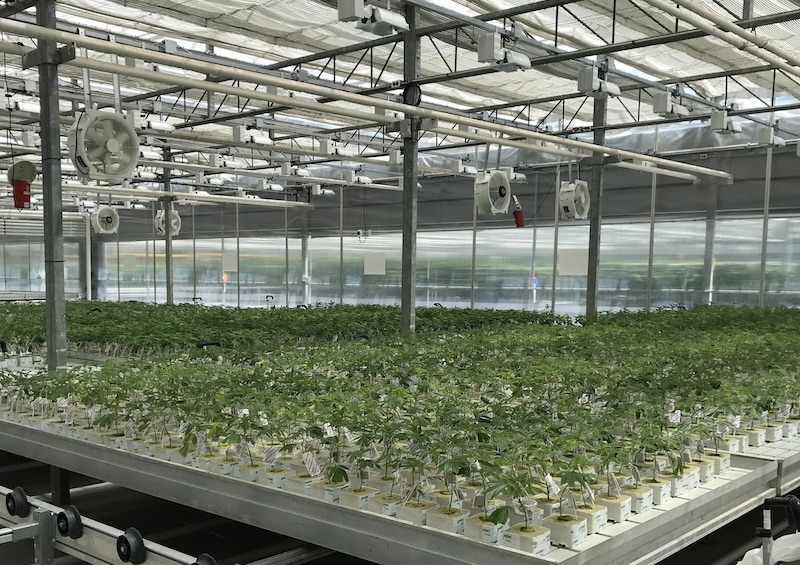 As more grow operations come online, a high yield of cannabis will be essential – and, like any crop, environmental control is key. Enter the HVAC contractor.

“Their product is this plant,” says Paul Stewart, director of sales, marketing and service at Desert Aire, a commercial dehumidification manufacturer based in Germantown, WI.

An inability to maintain ideal conditions will affect a producer’s bottom line. For HVAC contractors, this could mean a potential employment stream.

Desert Aire entered the cannabis industry four years ago when it received a service call to a grow operation in Colorado (the state legalized recreational cannabis in 2012).

In Canada, the company is involved in the development of large-scale cannabis facilities in British Columbia, Ontario, Alberta and New Brunswick, which range in size from 200,000 square feet to 800,000 square feet.

“It’s been the fastest-growing market segment that we’ve had,” says Stewart.

What the plant needs
Humidity, temperature, ventilation, cooling and lighting are just a few of many factors at play in a grow room operation, and HVAC needs depend on the growth stage of the plant.

At the beginning of the grow process, the small cannabis plant is not consuming much moisture and the lights are on for 16 to 18 hours a day. Stewart says this is a sensible load as a result of the lighting, and an air conditioner may be sufficient.

At the flowering stage, a cannabis plant can consume one to two litres of water per day. During this time, the lights are on for 12 hours a day.

When the lights are off, heat is reduced. The water – used to move nutrients – is then transpired through the plant’s stomata, resulting in humidity and a latent load.

Most buildings operate at 30 to 35 per cent humidity, says Robert Bean. In marijuana facilities, that percentage can rise up to 65 per cent.

Related: Greenhouse or indoor farm: that is the question

Bean is president of Indoor Climate Consultants in Calgary, AB and director of Healthy Heating. He is also a registered engineering technologist in building construction and a professional licensee (engineering) in HVAC.

“Running any kind of building at that high humidity level is a recipe for moisture problems within a building,” says Bean.

With high levels of moisture, air distribution and homogenous temperature is critical.

“What you don’t want to have is microclimates inside of your plant, because those microclimates are not allowing that plant to breathe or give off moisture and it’s just making a breeding ground for mould and mildew,” says Stewart.

The best way to control the formation of mould is to make sure air flows through the canopy to absorb moisture off the plant, creating a vapour pressure difference between the air surrounding the plant leaves, says Stewart.

“Unlike a building that’s occupied by people, these buildings are growing crops and those crops go through a cycle, therefore the heating, ventilation and air conditioning system goes through a cycle,” says Bean. “It’s dynamic.”

The majority of grow-operations are large, indoor manufacturing plants. A number of growers, however, have pushed for greenhouse operations.

While more environmentally friendly, the product price point is lower and the process more complex. On the other hand, indoor grow operations are more costly to operate.

“There is nothing sustainable or green about growing green,” says Bean. He says a cannabis facility uses approximately four to five times more kilowatts per square foot of energy per year than a hospital.

A look ahead
For many HVAC contractors and manufacturers, the transition into the cannabis industry is a natural progression.

Brad McNamee started out in his family’s plumbing and HVAC business at an early age with a focus on industrial operations.

Now he is the chief infrastructure officer (CIO) at Cannabis Wheaton Income in Toronto, and owner of McNamee Plumbing and Heating in Perth, ON.

As CIO, McNamee oversees a team of six people, including engineers and project managers. He is involved in the design of a facility from start to finish – materials, construction, cleanliness, HVAC and power, among other aspects.

“If you look back to 2006, 2007 – when manufacturing still existed in this country – we’re kind of heading back towards that in some respects because we need people to maintain and keep these facilities operational,” says McNamee. “It’s very critical to being able to produce good quality cannabis.”

A wide variety of systems have been introduced specifically for the marijuana growing application. Trane, Carrier and Johnson Controls are just a few manufacturers offering these products.

Trained local contractors who can operate and troubleshoot equipment when something breaks will be successful in this market, notes Stewart.

The unique environment of a cannabis facility will also require a contractor with the right skills and knowledge of the specific applications. Growers may even need someone on staff, says Stewart. He adds contractors should understand what the grower is trying to accomplish.

Ongoing maintenance contracts will be a significant aspect of the future of marijuana facilities, and job creation will be focused in rural areas, says McNamee.

An understanding of refrigeration, explosion-proof industrial facilities, industrial and institutional plumbing, irrigation and, of course, HVAC will give contractors an edge in this field.

“The big piece is the contractor that looks at this as an emerging market that’s going to be here to stay,” says Stewart. “It’s not just cannabis. I believe the longer-term viability is going to be in leafy greens and other forms of food products… We’re scratching the surface of that a little bit right now.”

(This article was originally published in HPAC magazine. HPAC would like to thank Brad McNamee for his technical expertise, which helped to shape this article.)