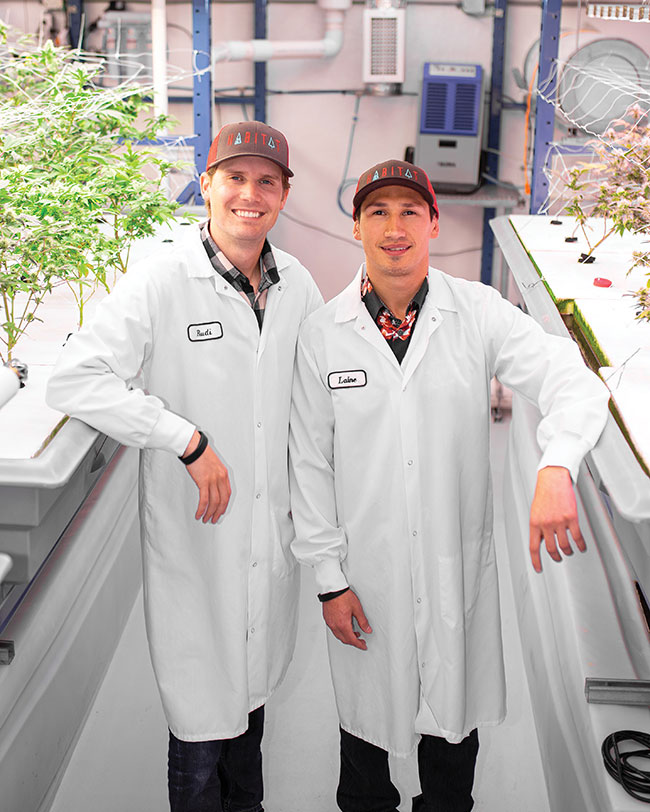 If you can’t see what a bison has in common with a salmon, then you might not have the inventive vision of two ranchers in British Columbia, who are now realizing their goal of “wielding the technology of nature” in an aquaponics venture that began bringing recreational cannabis to market in April.

The company, called Habitat, is the brainchild of Rudi Schiebel and Laine Keyes, who have been practicing “regenerative agriculture” at their 600-acre Turtle Valley Bison Ranch in Chase, B.C. Their idea was to extend this principle to growing cannabis together with Coho salmon in an aquaponics system.

“We wanted to marry everything we had learned about the symbiotic relationships between microorganisms, plants and animals, and bring that indoors coupled with 21st century technology,” says co-founder and chief executive Schiebel. “That’s how we were introduced to aquaponics – which is the epitome of that.”

In 2017, they set their sights on this goal. “But there’s not a place that you can turn to and just buy a system and get rolling,” says Schiebel. That’s when the two millennial ranchers sought out Justin Henry, a Vancouver-based aquaculture consultant who designed the system in collaboration with PR Aqua.

Two years later, the company’s success in achieving its foremost goal of quality was embodied by an announcement that both the cannabis and salmon will be certified organic under the Canadian Organic Aquaculture Standard. That is a first of its kind for cannabis.

The Habitat team launched its initial product, Cake, at recreational cannabis retailers in B.C., Saskatchewan, and Alberta. A second line, Caviar, will be available “for your New Year’s party,” says Schiebel. Shelter Craft Collective handles packaging and distribution, as well as online sales to medical patients at Shelter Market.

The operation, which has been growing cannabis on a micro-license, can produce 400 to 500 kilograms a year, with the capacity to double that in its 6,000-square-foot facility. The fish farm is currently small, yielding about 25 salmon a week.

But, says Schiebel, “we have our technology proven and are ready to start scaling.”

Proof of concept
The concept of aquaponics is basically this: fish produce waste products that plants need. In a recirculating aquaculture system (RAS), solid waste and ammonia are filtered out and captured in a digester where bacteria do their work in a process called mineralization. The result is nitrate-rich water, which is delivered to the plants. In addition, carbon dioxide produced by the fish, as well as by the bacteria, is captured to nourish the cannabis.

Think of the three players in aquaponics as the fish, the bacteria, and the plants.

In the case of Habitat’s design, known as a decoupled system, the cannabis and the salmon are each on its own system of recirculating water. “The two systems are operating separately to obtain the quality of water that is best for each,” says Henry, who now serves as director of aquaculture at Habitat.

“We have a lot more control, but we still have everything living off each other in a symbiotic manner,” adds the CEO. “It’s a full, living system.” 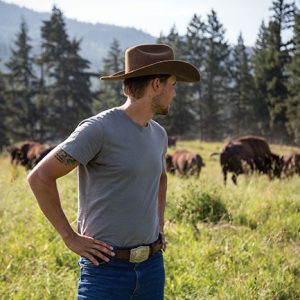 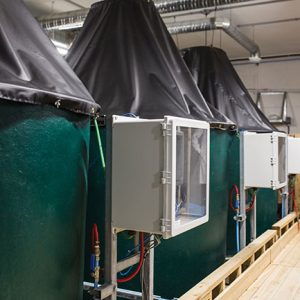 Making more by using less
For cannabis farmers who are burning through money, listen up: “In order for aquaponics to be disruptive, it needs to not only have the intrinsic environmental benefits, but economic drivers as well,” says Schiebel.

A major factor in this business model is how diversifying with two crops mitigates risk. There are also cost savings derived through synergies.

“We are decreasing the costs on the plant cultivation side from the inputs that are already on site because of the fish,” Schiebel explains. “There are cost savings from resource utilization.” (For example, large indoor farms augment CO2 levels using generators, burning propane, or bringing in gasified CO2.)

Plus, the plants are thriving, according to Schiebel. Less disease equates to increased yields.

Director of aquaculture Henry points to the ongoing research to quantify and validate this aquaponics equation, such as the work of Dr. Nick Savidov at Lethbridge College in Alberta. In 2015, that organization received a $2.1 million grant to investigate critical issues of aquaponics, including economic return on investment.

The craft of cannabis
Habitat’s co-founder Laine Keyes, a second-generation cannabis grower, has developed a bank of over 180 cultivars and oversees growing operations.

To achieve the goal of producing a premium product, he and his team devote time and care to the entire process from breeding to harvest to cure. That’s a luxury many large-scale producers can’t afford.

Particular attention is given to retaining the trichomes on the cannabis flower. Those trichomes, of course, are where the cannabinoids and terpenes are stored. Habitat insists on hand trimming versus tumbling, which “beats up the flower.”

“It’s like selling fish with a really bad filleting job,” Schiebel adds. But, all consumers may not fully appreciate the significance of such care.

Terpenes not only produce aroma, but also interact with other compounds, resulting in the so-called “entourage effect.” Globally, researchers continue to investigate this dynamic, but the Habitat team, like many growers, believes this interplay creates a range of effects, from “more uplifting to more sedating. It’s not just the THC content,” says Schiebel.

“But the market is not there yet. The driver among consumers, by default now, is the THC,” Schiebel says. That will change as buyers expand their knowledge around cannabis, he believes.

However, for today’s avid consumers – the repeat buyers who are intent on quality – the treatment of the flower, the trim process, and the flavour created by a slow cure all play a role in their buying decisions, according to Schiebel.

Organic certification is “a big driver as well for consumers,” he continues. And that makes sense. According to the Canadian Organic Trade Association, 83 per cent of Canadian millennials buy organic food products weekly. That cohort overlaps significantly with the heaviest cannabis users. 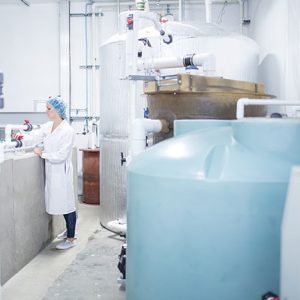 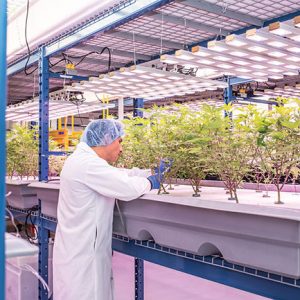 Why salmon
Although the most commonly raised fish in aquaponics is tilapia, the Habitat team chose Coho salmon. Over the years, the market for salmon has grown considerably, especially with increased demand for healthy and nutritious food in high-income urban areas. Coho salmon farmed in RAS, like Habitat’s system, has received “Best Choice” recognition from the Monterey Bay Aquarium Seafood Watch.

But farming salmon in RAS can be tricky. Mistakes can wipe out a lot of fish. To reduce that risk, Habitat was wise to enlist an expert: Justin Henry. With advanced degrees from universities in British Columbia and Denmark, both meccas of aquaculture, he has experience with recirculating aquaculture that dates back to 1995.

He has also chaired the technical committee of the Canadian General Standards Board to develop the standard for organic production systems in aquaculture. So, he is a master of that gnarly system of laws and governing agencies for organic certification.

Habitat’s nine-person team has come a long way to get to the point of launching during a pandemic. In addition to pioneering a new cultivation model, the company has seen dramatic fluctuations in interest by consumers and investors alike. But Habitat’s leaders are keeping their eyes on the prize. After all, says Schiebel, “Over the course of the last two years, we’ve gone from an illegal industry to an essential service.”

Organic certification 101
Cannabis is regulated under the 2018 Cannabis Act, with Health Canada issuing licences. On the other hand, food is regulated by the Safe Food for Canadians Act, with the Canadian Food Inspection Agency (CFIA) granting organic certification, and the CFIA owns the organic logo familiar to consumers. The key point: the logo can’t be granted to crops the agency doesn’t regulate.