The changing climate is a matter of concern for all, and although it particularly impacts those involved in agriculture, cannabis producers are no exception. 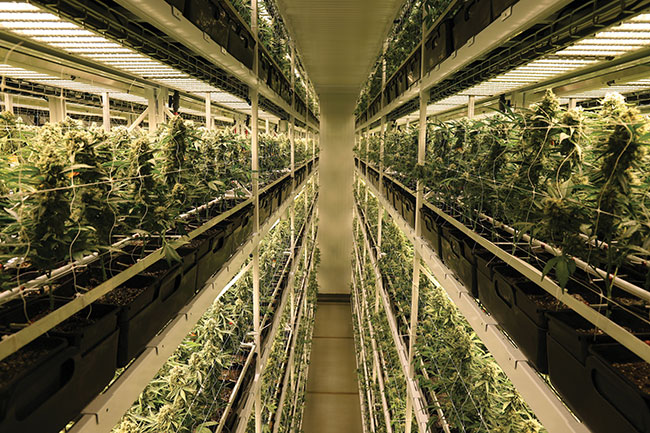 Greenseal Cannabis focuses on keeping a low climate footprint. Rather than ‘cost per gram,’ the company uses the measurement ‘grams per watt’ ­— how many grams of product are produced per watt of power usage.

Intensifying weather conditions impact how crops are grown and harvested, regardless of whether their production is indoor, outdoor or in a greenhouse. At the same time, cannabis producers also grapple with their own contributions to climate change and how best to mitigate those impacts through sustainable practices and more efficient technologies.

Agriculture and Agri-Food Canada’s website notes that climate change impacts, such as droughts or intense heatwaves, can cause crop failure and barren pastures. Annual and seasonal mean temperatures across Canada have increased, particularly in the winter.

Climate change has also increased the likelihood of extreme weather events, such as wildfires, flooding, hailstorms, and   tornadoes. Droughts and soil moisture deficits are projected to become more frequent and intense in the coming years.

While all those factors can impact cannabis producers, there may also be direct impacts specific to the cannabis plant. The report “Photosynthetic response of Cannabis sativa L. to variations in photosynthetic photon flux densities, temperature and CO2 conditions,” published in the journal Physiology and Molecular Biology of Plants, found that the rate of water use and photosynthesis in cannabis plants benefit in warmer weather, but once temperatures pass the threshold of 30 degrees C, the impacts become negative for both. Here are three examples of Canadian LPs looking at the impact of climate change on their business, and what they are doing to mitigate the risks.

DYKSTRA GREENHOUSES
Southern Ontario-based Dykstra Greenhouses has a 100,000 square-foot facility, which includes their growing operations as well as processing, storage, and other uses. Production manager and master grower, Bart Brouwer, stipulates that he’s far from an expert on climate change, but reckons that underlying climate issues have likely impacted the logistics of their operation. While winter is the best time to grow crops in a greenhouse, it’s also the most expensive time due to heating and lighting requirements.

“In the summertime, we’re not shutting down, but we’ve decided to grow bigger plants,” says Brouwer. “We’re not flowering out in the summertime. We’re just growing a natural crop; they’re going to flower naturally so we don’t have to heat or cool. In a vegetative state, they can handle the heat. They still don’t like the heat, but it doesn’t affect the flower because it’s not flowering. So, we’re now growing all big plants that are going to be harvested in October.”

The other impact with hotter summer temperatures that Brouwer has observed is a significant increase in the number of bugs they have to deal with.

“The bad bugs are, I would say, almost uncontrollable in the summertime,” says Brouwer. “The biological bugs that we use to fight the bugs when they flower like the heat a lot less than the aphids and what not. They thrive in the high heat and the biologicals don’t.”

In terms of efforts to reduce their overall climate footprint, Dykstra Greenhouses only use soil, avoiding rock wool, which creates more waste. The company also keeps electricity costs low using more efficient LED lights. Brouwer advises other producers that while some sustainable  practices do come at a high cost, others can serve to save a great deal of money in the long run by reducing energy consumption.

“We do a lot of research on how we can save our money, but at the same time, use less energy because that’s saving money in the long run as well,” says Brouwer.

GREENSEAL CANNABIS
Ontario’s Greenseal Cannabis Co. is an indoor grower known for their high-density vertical growing, with a high yield per square foot. And while an indoor grower will not experience as many direct impacts as an outdoor grower or a greenhouse, Phil Niles,  executive vice president of Greenseal, feels that many people would be surprised by how many impacts there are on indoor growers.

“There’s no such thing as a 100 per cent weather tight building,” says Niles. “We’ve even noticed a seasonality in our harvests with respect to drying. As you get more extreme temperatures, and especially more extreme humidity, we definitely see a difference in how fast the product dries.”

Niles adds that the humidity has had an impact even at night, which has led the company to increase their heating, ventilation, and air conditioning capacity in their drying rooms. But even if the direct impacts are limited, the indirect impacts can be quite pronounced. Niles says that he can always tell when conditions are hotter because Greenseal starts receiving more calls from their wholesale customers, looking to replace lost crops to fill orders.

With climate and sustainability issues in mind, Greenseal designed their operations with several efficiencies, such as employing the use of digital electricity.

“We’re actually able to change the wattage that goes to the light. You can just throttle it up and down,” which minimizes ballasts and heat sources, reducing the need for HVAC. They are also using beneficials for pest control rather than pesticides, etc.

Niles says the company is regularly examining ways to alter their practices to improve sustainability. While many companies discuss their ‘cost per gram,’ Greenseal deals in ‘grams per watt’ — how many grams of product are produced per watt of power usage. However, Niles recognizes that in an industry that often has thin profit margins, such efforts may be beyond the ability of many LPs.

“It’s an awkward and uncomfortable conversation for the industry right now,” admits Niles. “Most cannabis companies do not have spare dollars left over at the end of the month to spend on this stuff. So even if they wanted to do it, if the choice is keep the lights on, properly pay staff or invest in some solar panels for my roof, we know where most people are going to put their money.”

THE MICRO COLLECTIVE
Alberta-based The Micro Collective (TMC) has three indoor micro cultivation facilities with 2,150 square feet of canopy each, growing in a potting soil mix. They use hand watering and all artificial lighting. CEO Ed Wilson says that while their most difficult climate impact (to date) was from the imposition of the carbon tax, they are seeing a lot of indirect impacts.

“We’re finding that we’re using a lot more air conditioning through the summer here to keep the climate in check,” says Wilson. “Here in Alberta, 30-degree days used to be the rarity but we’re seeing that a lot more consistently these days; it’s really taxing on the infrastructure.”

The unpredictability of the changing climate was a significant factor leading to the decision to grow indoors.

“In Alberta, we have a very short growing season to begin with,” says chief growth officer, Kailey Parkin. “The financial aspect of it, and trying to be profitable, it just made more sense than to attempt outdoors.”

“Two years ago, we had a tornado touchdown behind our facility,” adds Parkin. “Last week there was the largest hailstone ever recorded in Canada about a half hour north of us. It’s too much risk to try and have an outdoor crop.”

Parkin says one of their more conscious decisions was to use horse manure for the destruction of waste products. Yet she feels that between the impacts of climate change, and the pressures of utility costs and the carbon tax, producers may have to become more creative in their methodology to find a profitable balance.

Matt Jones is a freelance writer and journalist who specializes in trade publications. He lives with a cat named Bowie in Fredericton, New Brunswick.