Fueled by an increase in high-tech “vertical farming” and cannabis cultivation centres, lighting for indoor agriculture is one of the fastest growing load categories for many electric utilities in Canada and the U.S. 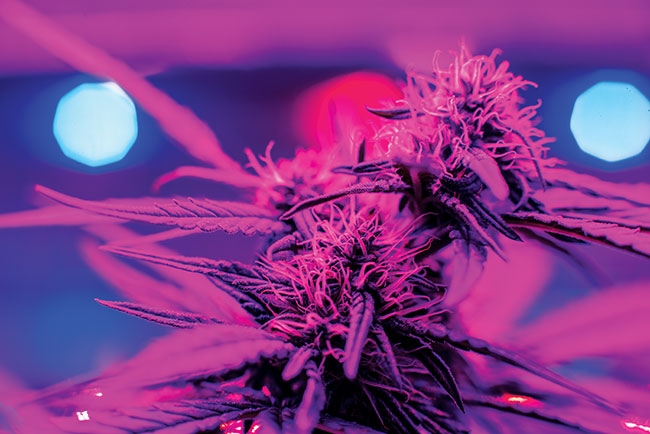 A U.S. Department of Agriculture report by Navigant Consulting in late 2017 pegged the annual electricity consumption of horticultural lighting installations at 5.9 terawatt-hours (equal to the annual electricity production of a gigawatt-class Canadian hydro station), and estimated that consumption will increase between 15 and 25 per cent per year, as more indoor agricultural operations come on line. Similar increases can be expected in Canada – perhaps even more so, since the colder climate pushes more cultivation indoors.

While rising electricity usage for grow lights impacts farmers’ bottom lines, on a large scale it also has the potential to stretch the limits of energy efficiency and greenhouse gas emission reduction targets set by various government entities.

The good news is that technology available right now can reduce growers’ energy costs, while making them pioneers in a new area of efficient production. The same Navigant Consulting, Inc. report cited above found that switching all U.S. agricultural lighting to light emitting diode (LED) technology could reduce the sector’s annual electricity consumption by 40 per cent, a savings of approximately $240 million. As LED technology continues to improve in efficiency, this savings potential will only increase.

As a starting point, LED products qualified under the new standard will need to be at least 10 per cent more efficient than the next best alternative, 1,000-watt high-pressure sodium lights – the product used in many indoor agriculture settings today. Aware of both the need to increase energy efficiency and the nascent state of scientific understanding about artificial lighting for plants, the DLC has committed to revising the specification to more rigorous standards every two years, based on actual observed products statistics in its QPL. Both the initial listing of products on the new Horticultural QPL and the two-year update will rely on data generated by independent testing labs, not self-reporting by manufacturers.

The DLC’s first round of requirements for horticultural lighting are in effect through October 2020. The organization will alert manufacturers in April 2020 of the second round’s higher efficacy requirements, and, with a six-month listing grace period, manufacturers will have a full 12 months of lead time to sell through existing inventory or update products.

The performance standard and related policies were informed by a rigorous stakeholder input process that included interviews with 20 horticultural lighting manufacturers, and consultation with organizations such as the Lighting Research Center and Lighting Enabled Systems and Applications at Rensselaer Polytechnic Institute, a multi-university consortium led by Cornell University (known as Greenhouse Lighting and Systems Engineering), the American Society of Agricultural and Biological Engineers, and AeroFarms – a large-scale indoor grower of leafy greens and herbs in Newark, N.J.

In addition to setting a floor for photosynthetic photon efficacy (how efficiently a fixture converts electrical power to photons), the new DLC specification sets product technical requirements for the lifetime of critical components such as drivers, LEDs and fans – acknowledging the importance of ensuring early horticultural LED adopters have a positive experience with the technology. And, recognizing that various levels of blue, green, red or far red light can contribute to optimal plant performance in various crops and/or environments, the DLC also requires enhanced reporting on product spectrum content in its new QPL.

You can learn more about the DLC’s Testing and Reporting Requirements for LED-based Horticultural Lighting at designlights.org and even more by attending a dedicated session, “The Hort Report,” at the DLC’s Annual Stakeholder Meeting in St. Louis, Mo., in April.

Damon Bosetti is technical manager at The DesignLights Consortium.