Features Regulations Research
Inside the research on cannabis-impaired driving 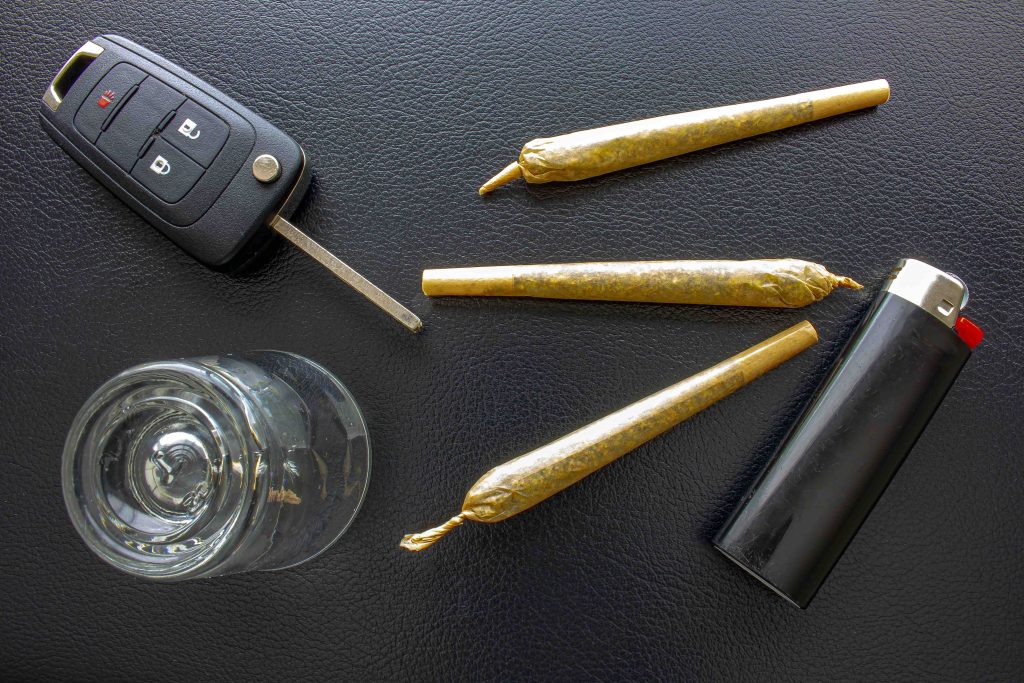 Cannabis is the second-most widely used substance in Canada, after alcohol. While there is an in-depth understanding of the impact of alcohol on driving, cannabis is a much more complex substance and can affect consumers differently depending on the product type, amount used and a person’s potential tolerance.

This has led to a number of misconceptions about the true impact of cannabis on driving. Research has shown that Canadians perceive driving under the influence of cannabis to be less risky than alcohol, and that they are also less likely to intervene when others engage in such behaviours.

Our Cannabis Health Policy and Research Partnership (CHERP) research team spoke to 91 youth and young adults over the summer of 2021 to get their perspective. They indicated that driving under the influence of cannabis was normalized behaviour, and because it was not believed to be as risky, there was peer pressure to drive after cannabis use.

In fact, driving under the influence of cannabis can be a very risky behaviour, which is a grave public health concern. It is essential to provide education and promote public awareness.

Driving under the influence of cannabis

A recent study has shown that the legalization of cannabis has not increased the rate of traffic accidents or injuries resulting from driving under the influence of cannabis. Care must be taken to not misinterpret this as cannabis being safe.

A 2012 analysis summarizing nine earlier studies on cannabis and driving showed that cannabis doubled the risk of a fatal or serious injury crash. Cannabis-impaired driving was associated with four to 12 per cent of all injuries and mortalities from motor vehicle accidents in Canada in 2012. The reality is that Canadians have been engaging in risky driving behaviours even before cannabis was legal.

A Statistics Canada report showed that in 2019, 13.2 per cent of cannabis consumers with a valid driver’s licence reported driving within two hours of consuming cannabis. This rate was unchanged from the 2018 pre-legalization report.

Another study, conducted by Public Safety Canada in 2017, reported even higher rates of cannabis-impaired driving, with 28 per cent of those who consumed cannabis indicating that they had operated a vehicle impaired.

Driving needs full concentration, and making the right decisions at the right time can save lives. Cannabis containing tetrahydrocannabinol (THC) affects motor co-ordination and reaction time, can cause hallucination and increases the risk of getting into a collision. Many studies show strong evidence that cannabis use negatively affects performance on driving-related cognitive tests on a variety of driving tasks. 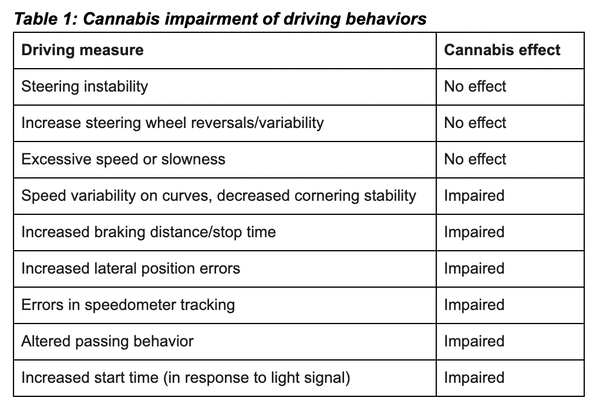 The idea that cannabis is less risky than alcohol may stem from the fact that impairment from cannabis can differ from alcohol. The biggest difference being that with cannabis, consumers are less aware of their level of impairment.

THC is the chemical we know the most about and the one that leads to the greatest impairment from cannabis. However, other less studied chemicals may also impair driving, and we are only at the beginning stages of learning about these effects. There are roadside tests to detect levels of THC in the blood, but the relationship between those levels and impairment is not as clear as those with alcohol.

It is difficult to predict the exact effect cannabis will have on a particular individual. Impairment can be based on many factors, including the dose of THC, personal experience with cannabis, individual biology and the route of consumption (for example, inhaling versus edibles).

There are several types of cannabis products on the Canadian market, and each product has a different amount of THC and takes a varying amount of time to reach its full effects. The following outlines typical time to effect and duration of impairment.

Experts recommend waiting a minimum of four to six hours after consuming cannabis containing THC. The combination of cannabis and alcohol intensifies the level of impairment beyond what a user might expect, should always be avoided if driving.

Cannabis-impaired driving is very risky. It is difficult to advise exactly how long someone should wait after consuming cannabis before driving. The safest choice is to separate cannabis consumption from driving entirely.

However, there are several strategies to avoid this risky situation, including:

Many young people believe that it is difficult for police to detect and charge drivers who consume cannabis. However, signs of intoxication (bloodshot eyes, smell of cannabis, shallow breathing or rapid heart rate) can form a reasonable suspicion for police. In addition, there are three tests of the Standardized Field Sobriety Tests (SFST) (horizontal gaze nystagmus (involuntary eye movements), one-leg stand and walk and turn) that are performed to evaluate impairment.

In Canada, the Criminal Code prohibits driving while impaired. Penalties range from a minimum fine to imprisonment, depending on the severity of the offence. Impaired drivers who cause injury or death can face longer periods of incarceration, including imprisonment for life.

It is essential to start a conversation with children and teens about the risks of driving under the influence of cannabis. Our CHERP research team’s public engagement events and social media (Twitter and Facebook) can provide information and resources. Young people need to be prepared to make informed decisions long before they are ready to get behind the wheel.

This article was originally published on The Conversation on Jan. 10, 2022.

Dina Gaid, post-doctoral position, is funded through a grant from Memorial University of Newfoundland, Canadian Center on Substance Use and Addiction, and Canadian Institutes of Health Research

Jennifer Donnan receives funding from the Canadian Centre for Substance Use and Addiction (CCSA) and the Canadian Institutes for Health Research (CIHR).

Maisam Najafizada receives funding from the Canadian Centre for Substance Use and Addiction (CCSA) and the Canadian Institutes for Health Research (CIHR).

Maria Josey and Michael Blackwood do not work for, consult, own shares in or receive funding from any company or organisation that would benefit from this article, and have disclosed no relevant affiliations beyond their academic appointment.

Related
LPs and research institutions are teaming up in pursuit of science
Canadian universities, colleges acquire licences to grow cannabis for research
Business case for research
From the Editor: Smart systems for growth