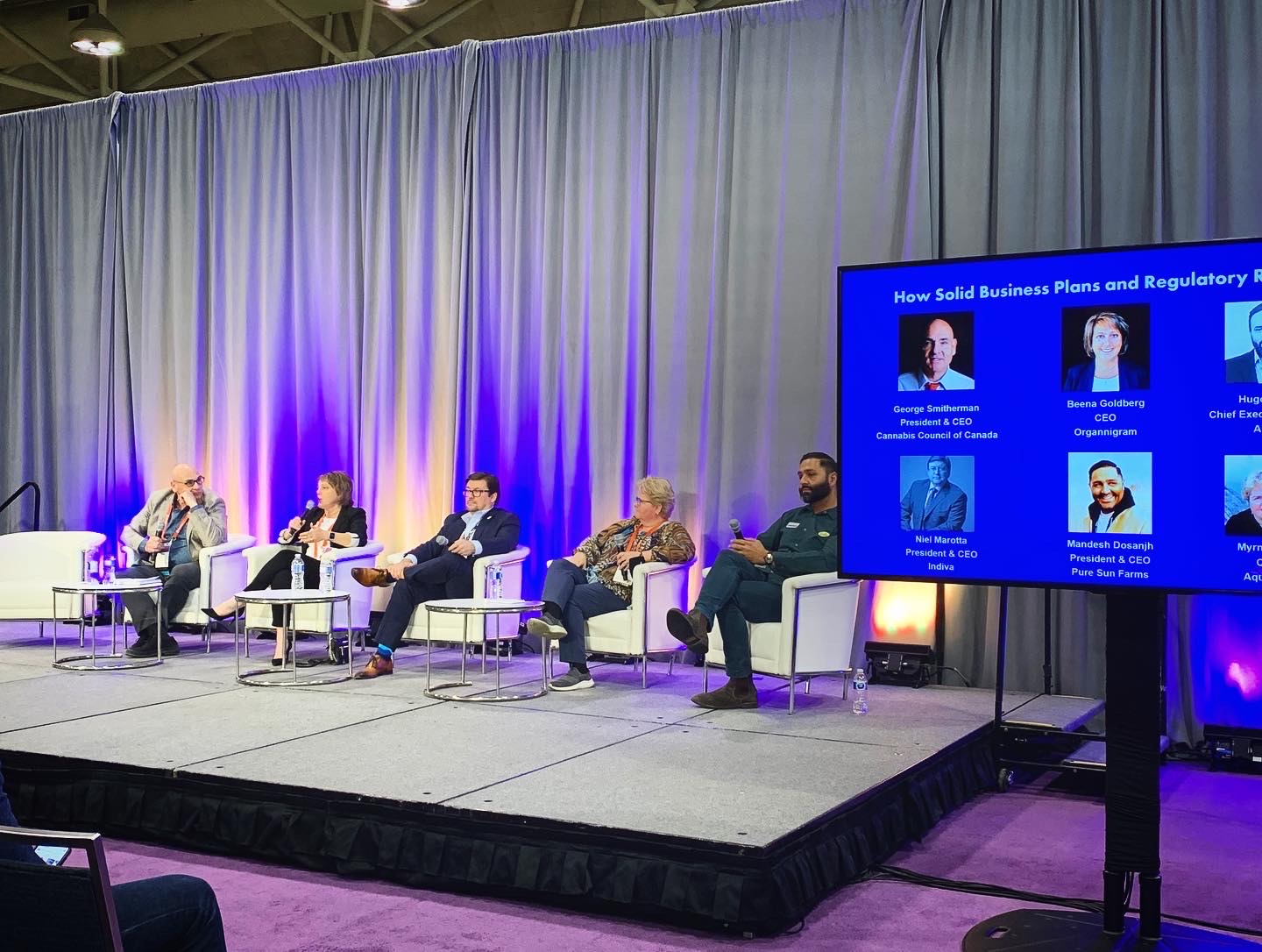 “And while we push for regime and reform to remove some of the hurdles faced in the industry, at the end of the day, you must have a company or product that can adhere to the regulations already in place,” Mandesh Dosanjh, CEO, Pure Sunfarms.

On Friday, May 13th at the Lift&Co. Expo Forum stage in Toronto, George Smitherman, president an CEO of the Canadian Cannabis Council, moderated a panel represented by the CEOs of four leading Canadian LPs, called “How Solid Business Plans and Regulatory Reform Align.”

Flying in from either coast to Toronto, the four top performing licensed producers brought their lived experience and expertise to Lift for a robust session on the nexus point where business plans and regulatory reform intersect.

Each of these companies produce flower, save Indiva, which is one of Canada’s top edibles-producing company with several popular brands. Both Organigram and Aqualitas are certified organic facilities in the Maritimes, while Pure Sunfarms produces sun grown flower, most well known for their Pink Kush strain.

From attending this panel discussion, here is some over-arching advice from the aforementioned experts (Disclaimer: the following is paraphrased):

Beena Goldberg: Cannabis is just another Consumer Packaged Good (CPG) and so it’s important to know who is using the product and what are their motivations—this is fundamental. Is the consumer a craft seeker? Are they interested in wellness options? Are they seeking the highest potency at the lowest price? Keep your options fresh and ensure that your best performing products are in the stores. Another piece of this is the fundamental science that goes along with it. Using innovation to deliver to consumers what they want. We have a big budget for foundational science innovation; meet the consumer based in science.

Niel Marotta: What we’re seeing is brands that are staying in Canada rather than going to the U.S. although many successful U.S. brands and products have been licensed in Canada. Indiva does not grow anymore; we have brands and are buying flower from craft cultivators that don’t want to deal with the final mile of stamps and wholesale etc. so we do that for them.

Myrna Gillis: I’ve come to cannabis as a lawyer, without a background in CPG. The focus should be on the consumer and the community, the same as clinical medicine. An LP must make an exceptional product, they must do something well; and for us it’s flower.

Mandesh Dosanjh: Pure Sunfarms in Delta, B.C. is a 1.6 million square-foot facility launched one year after legalization and had the number one selling SKU for 14 straight quarters of profitability: Pink Kush. You must know your “Why.” We knew who we were and how we could win, and we have a solid foundation in consumer context capability; know your consumer and what they are looking for. We have great retail and agricultural understanding and see flower as the Holy Grail, coupled with a hyper-focused, mission-disciplined approach.

As for evolving industry regulations, this is what our esteemed panelists had to say:

Goldberg and Gillis would like to see a reform on the Cannabis Health Products regulations, as in bring back product info and the ability to make claims about certain products and their specific health benefits, such as for sleep, stress, anxiety or pain. The introduction of other functional ingredients into cannabis products, as seen in the United States, would also be successful.

The de-stigmatization of cannabis products is a continued target insofar as decoupling THC from CBD. One way of doing this is by offering CBD products at health food stores and pharmacies rather than solely through dispensaries.

As an edibles producer, Marotta would like to see an increase in the levels of THC permissible per package. Extracts can contain 1000mg of THC but edibles only 10mg—this is an example of market failure because of lost potential sales and revenue.

Dosanjh upholds that when it comes to reform, it’s important to find win-win operational equations, such as removing the excise stamp for different products and using a universal stamp instead. He suggests that the government could potentially use the excise tax to help stamp out the illicit market; another win-win.