"We've never done this before, and while we can draw a lot of inferences, there's a lot that's unique," said John Kagia, vice-president of industry analytics at cannabis analytics company New Frontier Data, on what’s been surprising about the cannabis industry so far. 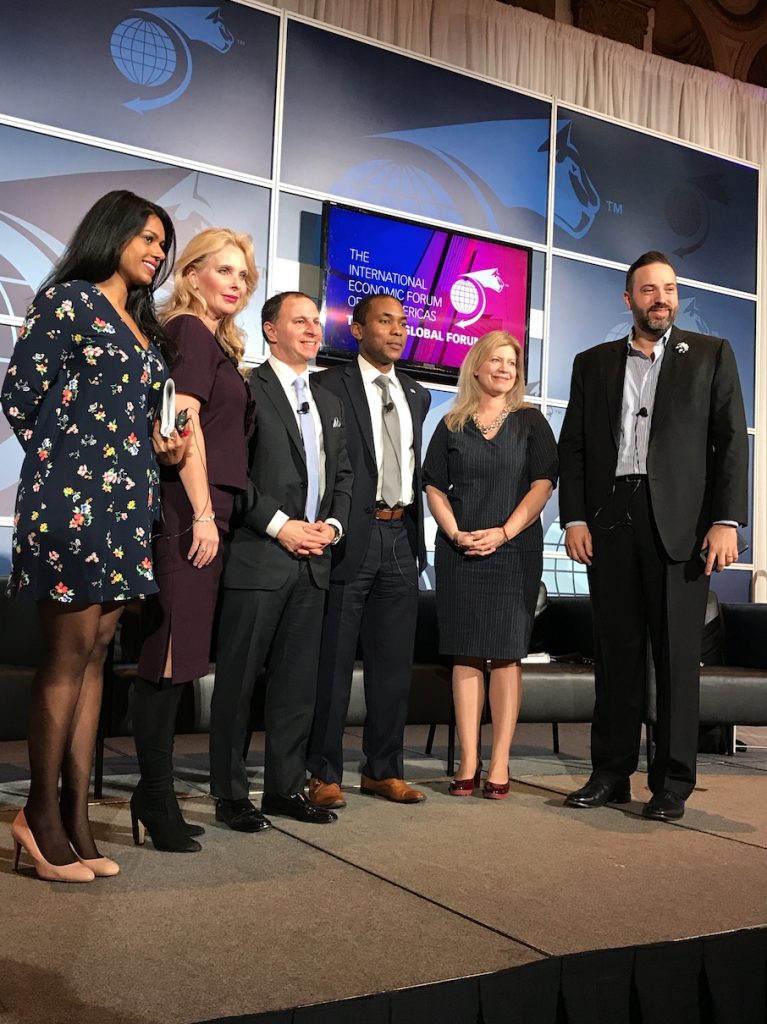 Kagia was one of five speakers at the Toronto Global Forum conference on Dec. 12. where Grow Opportunity sat in on The New Cannabis Economy panel.

The Toronto Global Forum, held under the International Economic Forum of the Americas (IEFA) is an international event to promote discussion of global issues. The 2018 edition brought out more than 3,000 participants.

Mitchell Baruchowitz, managing partner at private equity fund Merida Capital Partners says the most surprising thing he has noticed about the cannabis industry is the reactivity of sophisticated companies since legalization. Later adding, “There’s probably never been a substance in the history of the world that’s been this widely illegal and this widely used.”

Hugo Alves, president and director of cannabis company Auxly Cannabis Group said the industry is seeing supply shortages because growing cannabis in scale and in a regulated environment is difficult. He said what’s missing in the new cannabis industry is the execution. “This is an immature industry. People are making new mistakes all the time.”

“There’s been a blurring of the lines that I’m not sure everyone was prepared for,” added Diane A. Scott, chairman and CEO of the Jamaican Medical Cannabis Collective (JMCC).

Kagia also advised to “trust, but verify,” in this new economy. He said there’s a huge amount of optimism now in the cannabis space, but not all of it is founded. “Be conservative in your near-term outlook. While the opportunity may be real it may take a little longer to get there because of structural issues.”

Problem-solving
Capacity deal issues are happening with smaller companies, Alves said, adding that cannabis is an asset industry and there is a huge rush to get in at the risk of cutting corners.

Scott described how the JMCC started off by speaking to many Jamaican farmers who were producing both legally and illegally. She said the JMCC recognized the peoples’ skill in growing the plant, but worked with farmers to fine-tune and create a high-quality product that could be used specifically for medicinal purposes.

Scott said that in the end, the JMCC has been very well-received by Jamaica. “I think that every time we get a chance to legitimize the Jamaican industry, it’s going to benefit us all,” she said.

Another issue that needs to be addressed is that from a national perspective, Canada is in violation of its international obligations by legalizing cannabis, said Martha Harrison, partner at law firm McCarthy Tétrault. She said there will have to be international changes before the market has a free flow.

As the international markets liberalize Canada is going to have to look at its domestic regime to see if it needs to make more changes to it, Harrison added. “There are a whole host of international trade issues… I think in the next 24-36 months our government is going to address some of the treaty issues.”

Medical vs. recreational
Does the potential for cannabis lie more in the medical or recreational side? New Frontier Data has done the research to deconstruct the medical and recreational categories and Kagia said the definitions could be clearer in order to categorize users accordingly. The recreational market is significantly larger than the medical one right now though, he added.

Although medical consumers spend more than recreational users, according to results from New Frontier Data’s research, that elevated spending doesn’t offset the fact that there are more recreational users total.

Alves said he believes the Canadian government is trying to amalgamate users into one category, which he does not think is in the best interest of the industry and its various types of users.

“Medical access is a vital importance,” Alves added. “Having that medical patient designation means something.”

Opportunities and disruptions
“What’s the best opportunity in cannabis? It’s a new industry – they’re all good,” said Alves. “Once you unlock the research potential, were going to find out what the plant does [and] physician attitudes will change as well.”

When it comes to the disruptive capacity of cannabis, Baruchowitz said anything with an eldercare element is going to be “massively disruptive… There’s going to be some really big losers that don’t even see the tidal wave coming,” he noted.

The consumer product end is going to be important moving forward added Harrison. She said it’s a bit of a guessing game now for coordinating with companies on the edible market.

“I think the biggest disruption for cannabis is the social change… How it impacts the market will be pervasive,” Alves said, adding that once the tide starts turning on social and political views it will move very quickly.

“Never mind Canada, the world is changing its view about cannabis,” he said.