Features Cultivation Production
Out and About

An inside look at outdoor cannabis cultivation 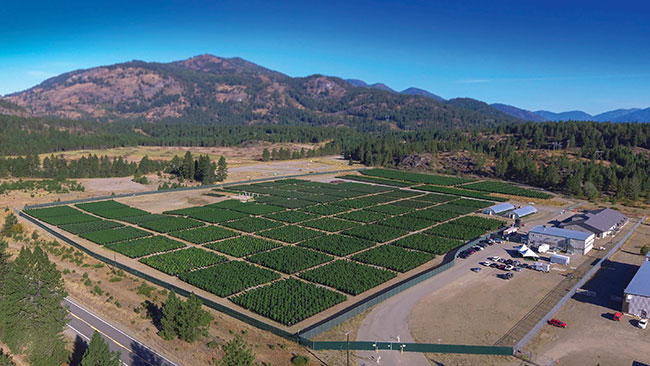 The legal cannabis industry in Canada has evolved on all fronts, including in outdoor cultivation.

In August 2020, Health Canada stated that licensed outdoor growing capacity was almost three times that of indoor, reaching a whopping 59 million sq. ft. It’s scalable, perceived as natural and sustainable, and offers both low capital and operating costs – and while future prospects look bright, this type of cultivation must be done properly.

And it’s clearly not for everyone. For example, in December 2020, Canopy Growth announced the closure of its last outdoor facility in Saskatchewan, and at the end of March 2021, 48North followed suit, shutting down its Good Farm in Brant County in Ontario. Both companies listed profitability as a main reason.

“It seems a lot of growers rushed to outdoor growing because of the allure of a low-cost, high-margin product at scale, and many producers were focused on cheap biomass,” says Alex Rumi, co-founder and chief strategy officer at Good Buds in Salt Spring Island, B.C. “We started our company from the outset with craft outdoor (cultivation) in mind. We’ve seen that top-quality, craft outdoor cannabis is possible through award-winning growers from California. We knew there was an opportunity to bring that quality to Canada, and Salt Spring Island is really the perfect place for it.”

Rumi notes that the island’s Mediterranean climate is the closest in Canada to California’s Humboldt County, where a large amount of award-winning cannabis has been grown – and that the terroir (soil type, climate, sunlight and so on) of a given location has a profound effect on cannabis quality and taste.

“In our early days, we enlisted the help of an ‘Emerald Cup’ organizer, Samantha Mikolajewski, who brought forward a lot of growing techniques and set us up to be a sustainable, organic-certified producer,” says Rumi. “Great weed doesn’t need to be grown indoors. Great wine isn’t grown in a warehouse, and I think we’ve seen that a high-tech facility doesn’t always mean that you’ll grow great weed. We believe craft outdoor cannabis is possible in Canada with the right terroir, genetics and growing methods.”

Overall, Rumi notes that growing outdoors comes with different variables like weather, risk of genetic contamination and THC level, but he and his team mitigate these risks through a lot of R&D and planning. “We’ve spent the past two years hunting for the best phenotypes that will really deliver outdoors in our soils,” he says. “We’ve found some winners that are not only high THC but that feature alternative cannabinoids like CBG.” Their ‘Gluerangutan’ strain achieved 28 per cent THC last year.

Christina Lake Cannabis
Nicco Dehaan, master grower and COO at Christina Lake Cannabis (CLC), also cites terroir, growing methods and genetics as keys to their success. However, during an online panel discussion in late April, he also credited team experience and hard work. Last year was its first harvest on 32 acres of licensed cultivation space in lower mainland B.C. near the U.S. border, which according to the leadership team went extremely well due to good growing conditions and the fact that all team members – some of them growers with 25 years outdoor experience – “gave it 110 per cent.”

The harvest topped 32,500 kg of dried cannabis, with plants reaching 10 ft. tall. All plants are clones propagated in the greenhouse. Of CLC’s more than 75 outdoor strains, the licensed producer is currently growing eight.

“Genetics is everything outdoors,” explains another of CLC’s master growers, Steven Bowering. “A constant breeding program is necessary, testing new genetics every year.”

Drip irrigation is used at CLC, on potted plants grouped in zones by strain. Drones were used to monitor the crop as it grew in 2020, detecting at a very early stage if plants in a given zone were drying out faster than expected, with irrigation adjusted accordingly.

WeedMD
In Strathroy, Ont., WeedMD grew 27 acres of cannabis for the second year in 2020. Head of cultivation Curtis Wallace says their decision to do outdoor cultivation was definitely driven by its low costs, but he adds that “there is certainly a draw to cultivating the plant the way it was intended to grow, naturally.”

The company started outdoor cultivation in 2019 with over 35 strains, used eight last year and this year, may narrow that to six. Acreage outside will also shrink to some extent in 2021.

“Unlike other licensed producers, WeedMD has never been interested in maximizing our fields to grow copious amounts of biomass,” Wallace says. “We tend to focus on growing quality biomass and cultivars that are recognized for their terpene profiles and cannabinoid content.”

Circumventing the challenges
The challenges faced by outdoor growers depend, to some extent, on their set-up and scale, but pests and disease are a threat that every operation must address. Wallace reports, however, that “for the most part, we’ve been quite fortunate in that we haven’t really seen diseases pop up outdoors. Powdery mildew is always something we look out for but in general, Mother Nature has taken care of pests and potential diseases for us… As the larger pests that are not particularly attracted to cannabis tend to feed on the smaller pests that are. Once again, Mother Nature is doing the heavy lifting.”

During the CLC panel, Dehaan explains that the use of UVN light keeps insect populations down indoors during the seedling stage. Outdoors, CLC staff worked with some biologists during 2020 to enhance aphid predators.

“We have a good native ladybug population and we introduced lacewings,” Dehaan says. “We distributed larvae throughout the field, and this year, we’re looking at planting companion plants around the plots as well.” These plants aim to boost the populations of these beneficial insects.

Rumi agrees that natural predators like frogs and ladybugs help with pest control, and for weed control, he uses cover crops like clover that outcompete them (and also fix nitrogen in the soil, making it available for cannabis plant use).

At CLC however, bud rot (Botrytis) and powdery mildew can pose problems. “Wet weather, humidity, morning dew will encourage bud rot,” says Bowering. “It mostly happens when plants are over ripe or exposed to excessive rain. Powdery mildew is encouraged by stagnant air and lack of sunlight (UV light kills the spores). We’ve built genetics that are mostly resistant to powdery mildew.”

Along with good genetics, and what Bowering calls “very good air flow” in the valley where the operation is located, no fungicides have yet had to be used.

A large harvest
The gigantic harvest at CLC poses a challenge in several ways. To handle the volume, strains were planted that reach maturity in a staggered fashion starting in August and ending in October. Dehaan explains during the panel that on-site testing was also really important to determine points of peak harvest.

“It was about two weeks earlier than we had thought,” he says. “It cuts cycle time and product is better. It was a huge win for us.” He adds that the small amount of root binding that results from growing in pots seems to trigger flowering earlier.

CLC has the capacity to dehumidify up to 6,000 kg of material a day. In the future, they may explore fresh-frozen harvesting methods. At Good Buds, however, all outdoor cannabis is hung to dry because a slow cure “really locks in the terps,” says Rumi, “but… as you can imagine, fitting 13 acres’ worth of plants into drying rooms can be a tight squeeze. We’re continuing to add drying space to our site every year.”

However, finding enough people on the island to work the harvest is not easy, and Good Buds is committed to not using migrant workers and to providing a living wage. Over time, they’ve become more proactive in finding seasonal staff.

To address its labour challenges, WeedMD has taken a multi-pronged approach. “With the hot, humid summer temperatures in southwestern Ontario, working outdoors in full sun can at times be gruelling, but we’re lucky in that the same crew voluntarily returns to work outdoors for us every year,” says Wallace. “But we now…know how to cycle our crews more efficiently. In fact, we used 60 per cent less labour in our second year over the first because we automated some of our cultivation practices by using an industrial planter.”

A look at sustainability
The degree of sustainability of outdoor versus indoor cannabis cultivation is complex to pin down, and greatly depends on individual practices. Sustainability can encompass everything from work conditions to use of recycled paper in the office.

All outdoor cannabis operations certainly use sunlight instead artificial light in a highly-controlled environment during the grow-out phase. This saves a large amount of energy.

Many operations are using beneficial insects for pest control, and all are continuously making breeding advances in terms of pest and disease resistance. Some operations like Good Buds are certified organic.

In terms of water use, irrigation/fertigation is required with the scale of outdoor growing, but rainfall can supplement irrigation to some extent, depending on the year. At Good Buds, rainwater is also captured for irrigation, and at WeedMD, irrigation is sourced from reclaimed water from its greenhouse operations (as well as onsite reservoirs).

Looking forward, consumers will continue to expect the cannabis industry to show it’s making strides with sustainability, and they do with all other industries, and this will be easier for some outdoor – and indoor – operations than others.