Features Cultivation Medical Production
Part 3: Are you compliant with a cannabis plant’s physiological rules and regulations? The rules for light distribution 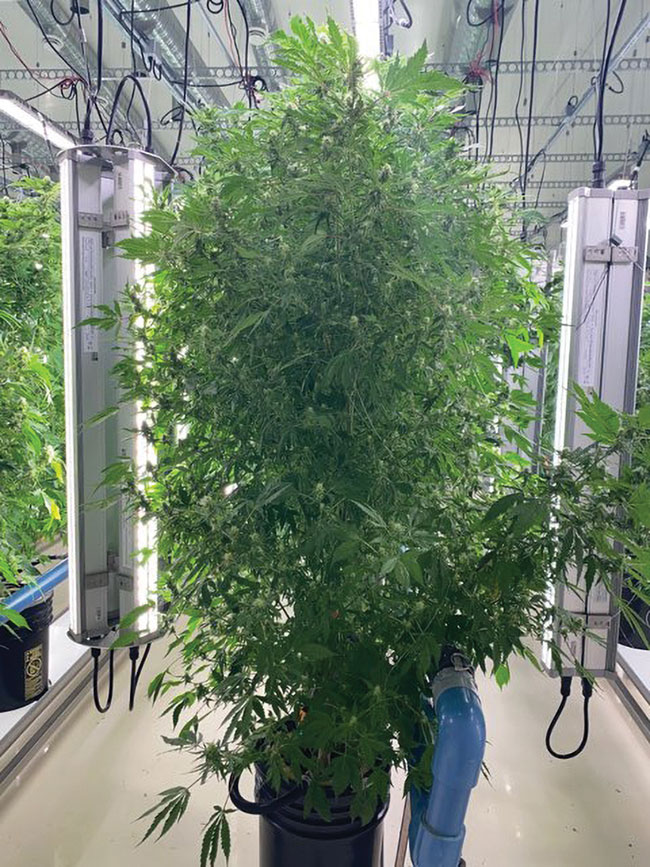 “The guiding rule is that keeping track of DLI is important and growers need to follow their own experiences, while sometime running the risk of light saturation.”

When it comes to lighting, growers should understand that installing LED or other lights in a greenhouse is just the starting point.

The distribution of light above and within the plant canopy is important. Top installed light mostly provides adequate light within the upper one meter of the plant; it may be even less if the plant is more vegetative.

Recently, we took some measurements and found that 400 micromoles/m2/second at the top leaves and at the bottom the light varied from 200 to 100 micromoles, with lower leaves starting to turn yellow. As such, best practice is to place either side lights as shown in the picture below. Because many growers perform very drastic defoliation, which is not good practice, we believe that leaves should be removed only when they show the symptoms of lack of light or air movement needs to be improved in the canopy. The lack of light symptoms will show as loss of green colour and a yellowish colour may develop.

Understand Daily Light Integral measurements
Daily Light Integral (DLI) is a measure of usable light plants receive over a day. It is measured in mol/m2/day. This measurement will be incomplete without the consideration photosynthetic photon flux density (PPFD) and its unit micromole (μmol). PPFD refers to the light intensity your plants receive or the amount of light photons that hit a surface (i.e., your plant canopy) in one second. It is measured in micromoles/sq. meter /second. Since PPFD numbers represent photons measured per second, in the course of one day you can end up with millions of micromoles. PPFD values will increase with decrease in distance from your LED grow light.

In general, DLI describes the number of photosynthetically active photons (individual particles of light in the 400-700 nm range) that are delivered to a specific area (1m2) over a 24-hour period. One micromole of light equals more than 62 quadrillion photons. It is calculated based on light intensity in micromoles/m2/second multiplied by total number of hours the light is “ON” in indoor situations or in greenhouses natural light is available. In case you are wondering how many micromoles are in sunlight at noon, the estimates are around 2,000 micromoles/m2/s and the moles for a 12-hour period will be 86.4. In Northern latitudes the sunlight in summer could be up to 18 hours and thus DLI would be 129.6 if we calculate based on noon time micromoles. This is an example of DLI in action. Actual values during the day will be less because of the angle of the sun’s and diffusion through greenhouse glazing materials.

For optimal yield, cannabis plants need a minimum of 20 moles of light per day. However, growers aim for 40 moles, or 40,000,000 umol per day, to maximize their yield. Thus, the monitoring of DLI is imperative throughout the different stages of the cannabis life cycle. During the seedling stage, growers must ensure that the cannabis plants receive DLI of 13-19 mole each day at the range of 200-300 micromoles/m2/day for 18 hours. At this range, there’s a chance of better yields when your plant reaches the vegetation stage.

During the vegetative phase, growers need to provide 300 umol per second on cannabis canopy for 18 hours to achieve 20 moles of light per day, as recommended ranges from seedling to veg to bud do vary. During the cannabis flowering phase, growers need to deliver 462 umol per second for 12 hours straight in order to achieve 20 moles of light per day. If growers want to increase the amount of light from 20 to 40 moles per day, resulting in higher yields, they must double the numbers above 300 PPFD or umol per second to 600, during the vegetative phase, and 462 PPFD to 924 PPFD during the flowering phase.

The guiding rule is that keeping track of DLI is important and growers need to follow their own experiences, while sometime running the risk of light saturation. We have seen recommendations of using 1,000 micromoles with a DLI of 43.2 moles, which is in the high range, thus potentially leading to damage to the crop. It is important to understand that the desired DLI can be achieved by varying the light intensity and the duration of light.

Contribution of light in terms of heat
Light is energy and is converted to heat. This applies to sunlight and the supplemental lights as well, both High Pressure Sodium (HPS) and LED. When energy inputs in a greenhouse are examined, the following facts are worth noting:

The table provides a comparison of heat contribution from sunlight at four locations in Alberta. This illustrates that sunlight is a major factor in heating greenhouse spaces and could play a very significant role in achieving zero carbon foot print.

Most indoor cannabis facilities use HPS and/or LED lights for production. Growers should be aware of how much heat is produced by the lights being used, so the cooling system can be planned accordingly.

So, what does all of this mean for growers? Ultimately, they should understand the rules and regulations of light supplied to a cannabis plant from the beginning of the crop to the end. If every leaf can receive the same amount of light then yields are sure to be increased.

Gagandeep Singh Bhatoa is a scientific writer in Regina, Sask.
He can be reached at gaganagrico@gmail.com.