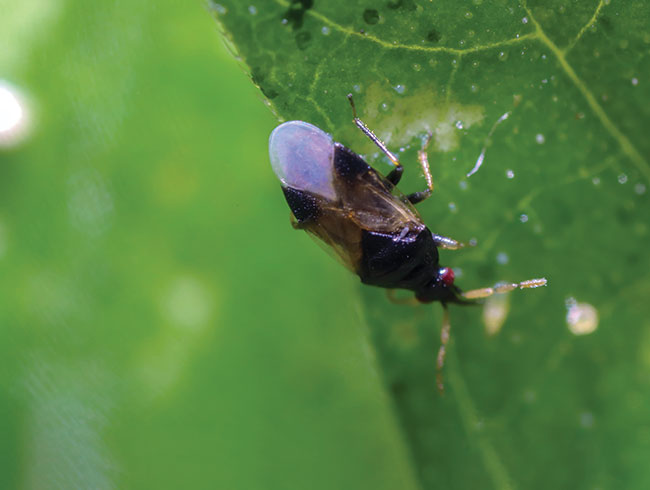 Some of the earliest scribblings of recorded history document humankind’s struggle with agricultural pests and disease responsible for famine and death across the centuries.

While today in North America, plagues of locusts are seldom compared to the late nineteenth century, the stakes still remain high. Despite less personal risk, failure to implement proper Integrated Pest Management (IPM) protocols can certainly contribute to the death of a business, let alone a crop.

Margins are tight, competition is stiff, and companies can’t afford to lose           significant portions of their investment due to pests and disease.

Despite thousands of years of progress, many of the same mitigation techniques employed by early growers are still in use today — particularly in the highly regulated cannabis industry.

Soaps and oils have been in use for millennia, and beneficial insect utilization has also been documented as far back as 324 BC.

In Israel, an early mover on the medicinal cannabis front, former Biobest Head of R&D and cannabis IPM expert, Guy Gafni, primarily employs an organic approach to IPM, which carries on this tradition.

I sat down with him virtually to get his thoughts on the challenges faced by the industry he helps provide for today.

GO: What are the top IPM issues you’re dealing with these days, in terms of severity, should things get out of hand?

GG: It’s hard to say. I think it varies on different farms, but usually I think that the biggest problem is probably aphids. There are a lot of different aphids, but mostly it’s the melon or cotton aphid, and the cannabis aphid.

And then it’s spider mites and grey mold and powdery mildew. Fusarium sometimes. But when you get aphids, you can’t really sell those plants, because they also produce honeydew, and next you’ve got different fungi that grow on the honeydew. So that’s a problem. It’s not marketable; you have to throw it away.

GO: So, there’s a potential for you to lose a substantial amount of your crop if you don’t catch it in time?

GG: Yeah, and aphids reproduce very quickly. It takes about, let’s say at 25 degrees Celsius, it would take something like five days to become an adult. And then they would reproduce—no mating, no nothing; they don’t need any males. So, within five days it becomes an adult and then it multiplies by something like forty offspring per female, which of course restarts the cycle five days later.

GO: The infestation increases extremely rapidly — how important would you say early detection in IPM generally is then?

GG: Early detection is the key. Let’s say it’s also the key for quality — it’s the key for reducing the use of pesticides and a reduction in the amount of required beneficials. If you can detect pests and disease in time, you can save a lot of money.

GO: In terms of detection, most operations use scouts — how effective is traditional scouting with respect to risk management?

GG: In order to do it correctly, you have to know exactly where to look and what to look for. And when you see something, you have to know what it is exactly. Is it a pest or just an insect that came from outside and landed on the plant?

GO: When a farm hires you as a consultant, what kinds of changes are you making to IPM related procedures for them?

GG: What am I changing? Lots of things… different pesticide combinations, I’m changing the way they spray… even the machinery. I’m using physical barriers and I’m giving them a lot of different agrotechnique guidance. Things like deleafing. I explain exactly the biology and ecology of the beneficials and how they interact with both the plant and the pest.

I get into fine tuning to get the maximum advantage from the beneficials. But it can be anything, like mesh nets on the ventilators, and even the materials that they use for cleaning the greenhouse.

GO: While we are still using all these mitigation techniques employed throughout history, with respect to new digital technology that helps with detection, I know growers can sometimes be a bit skeptical. Do you think that most farms tend to adopt new technology cautiously?

GG: If they think that it’s going to be a good solution, then I believe they will try it, but they will not install it across the farm, just in one small area. If they see results, they will probably buy it. Anything that can reduce costs and maximize margins these days is definitely of interest.

With traditional IPM methods stacked atop the digital revolution, evidently it’s a great time to be a grower!

Ray Richards is the CMO of Fermata, a data science company specializing in agricultural intelligence through machine learning.