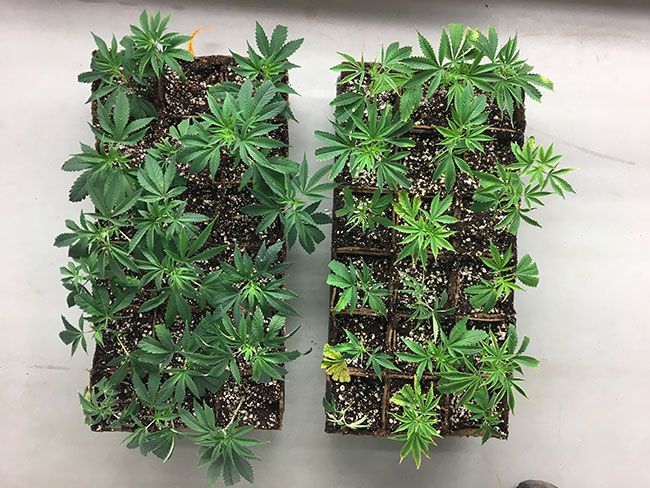 In this experiment, the clones were divided into two groups: the first group used pre-moistened substrates (left), and the second group used peat mix that was not pre-moistened (right). Photo: Greenseal cannabis co.

There is no peer-reviewed research regarding transplant shock for cannabis, but if they behaves similarly to some plants, then the costs are likely substantial.

Research for plants, like tomatoes and melons, shows that transplant shock not only increases a plant’s susceptibility to pests but can also significantly decrease yield and increase the amount of time it takes fruits to reach optimal ripeness.

Researchers generally believe that the severity of transplant shock is directly related to a capacity imbalance between the root and shoot systems that are created during transplanting. For instance, when you move a rooted clone from its rooting substrate to a new one, the root hairs are damaged. These tiny root hairs drive most water and nutrient uptake, as well as protect the plant from harmful bacteria. At the same time, the shoot is typically not damaged and thus continues to demand water from the roots at a rate that exceeds root capacity. Root capacity is further worsened because the remaining roots will have reduced contact with the surrounding substrate until regrowth begins again. It is this imbalance that causes the signs you typically see following transplanting, like wilted, brown, and scorched leaves.

There are several methods to lessen transplant shock, which are all aimed at reducing the root/shoot capacity imbalance by decreasing root loss, improving root contact with the new substrate, reducing transpiration, and “pre-conditioning” the plant by supplementing the nutrient mix with certain elements before transplant.

Reducing root hair damage, improving root contact
To illustrate these different methods for this article, we conducted a few simple experiments at GreenSeal Cannabis Company. For the first, we pre-moistened the substrate before transplanting rooted clones into it. This is a common method that aims to reduce root hair damage and improve root contact with the new substrate.

Each day after transplanting, we measured the vertical growth rate for both groups and took photos. The image above was taken about 24 hours after transplanting. You can see that the plants on the right, which were planted into the dry mix, have leaves that are visibly paler, that are often curled, and exhibit scorching at their tips. For both groups, vertical growth stopped for around two days, but over a four-day period the average growth rate was significantly higher for pre-moistened group.

Reducing transpiration
Some ways of decreasing transpiration rates include reducing the leaf surface area (by removing or snipping some leaves), light intensity, air flow, and vapour pressure deficit (VPD).  As a demonstration, we again took 108 rooted clones and randomly assigned them to one of two groups.  The first group was grown for five days in a space with little airflow. The second was grown in identical conditions but we used a fan to create around 0.75 meters per second of air flow, which is about the level of airflow you’ll find in a typical grow room that has wall mounted fans set on medium.

We measured the change in pot weight each day as an estimate of the transpiration rate. The group grown in the higher airflow environment had an average transpiration rate that was about 28 per cent higher. The image shown here pertains to a sample of plants from each group on day 5. It is clear from the photo that the high airflow group suffered significantly more transplant shock.

After fixing the sources of increased airflow in our vegetation room and implementing other changes to reduce transpirations rates, we consequently increased success rates and plant quality, which reduced mother care and propagation costs, and saved space. 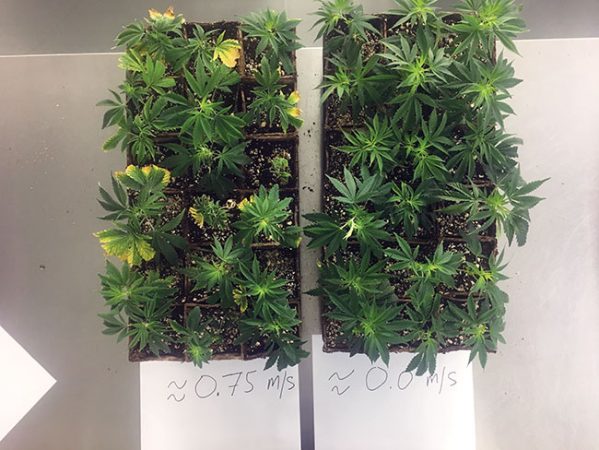 The plants on the left, which had higher airflow, exhibited more transplant shock than the other group.

Preconditioning plants for transplant
The final strategy we want to demonstrate is called pretransplant nutritional conditioning (PNC), where plants are given specific nutrients to enhance their ability to draw up nutrients and water before the transplanting phase. It predisposes the plants to tolerate transplant shock better or to recover more quickly. Phosphorous and nitrogen are commonly used for PNC. Several studies have shown that preconditioning plants accelerates optimal ripeness for greenhouse container crops, like tomatoes.

Each day, for four days following transplanting, we measured the change in average plant height. We found that the average height of the group that was not preconditioned increased by 41 per cent, while the average height of plants in the groups with low and medium levels of P and N increased by 53 per cent and 61 per cent, respectively. Image 3 shows the control group next to the medium P and N preconditioned group on day 4. Signs of transplant shock are much more visible for the control group.

At GreenSeal, we grow using a high-density, vertical farming system (Image 4), so the efficient use of space and resources is a constant focus. Experiments similar to the ones described here have led to process changes that have helped us manage those resources better. How much better is still not clear since we have not yet measured the impact on output. We are currently conducting longer-term experiments so we can look for differences in yield, earliness, and cannabinoid profile. We plan to submit those results to a peer-reviewed journal and also publish them in a future edition of Grow Opportunity.