Features Production
Under the sun

About an hour and a half west of Toronto in Brant County, a 100-acre organic farm is getting ready to receive its first batch of cannabis seeds. Surrounded by 5,800 meters of perimeter fencing and several state-of-the-art security cameras, The Good Farm is expected to produce about 40,000 kilograms of dried cannabis once cultivation gets underway. 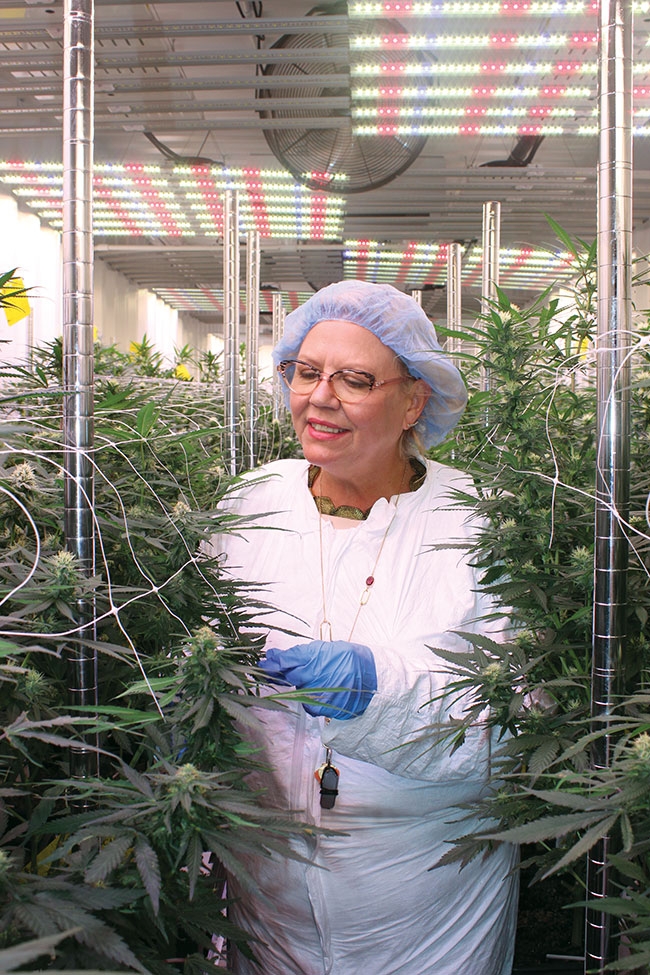 48North co-CEO and director Jeannette VanderMarel believes cannabis belongs in the outdoors. So she’s leading the charge in making outdoor cultivation the norm in the Canadian cannabis industry.

When Health Canada announced last year that it will allow the cultivation of cannabis outdoors, Jeannette VanderMarel and her team at Good & Green, a subsidiary of 48North Cannabis Corp., immediately began the work to apply for a Health Canada licence for outdoor grow.

“I have always believed that cannabis belonged outdoors,” the president and co-founder of Good & Green and co-CEO at 48North tells Grow Opportunity. “It only moved indoors because of its illegality.”

Just days after the Cannabis Act came into force on Oct. 17th, the Brantford, Ont.-based licensed producer applied for an outdoor cultivation licence with Health Canada. As of this writing, the application is still pending, but VanderMarel hopes that long-awaited go signal will come in time for spring planting. The company did, however, get its processing licence for its Brantford site, where it will bring harvest from the outdoor farm for extraction and processing.

There are three types of Health Canada licences for outdoor cultivation: nursery, micro and standard cultivation. There is no limitation on the type of cannabis that will be permitted, and no THC limitations as well.

Outdoor growing is far from a novel approach for cannabis cultivation. California produces an estimated 326 million grams of outdoor-grown cannabis annually, according to data from the U.S. Department of Agriculture. Kentucky and Tennessee are also big producers of sun-grown cannabis. The warmer climate in certain states south of the border certainly makes them ideal locations for outdoor cultivation. However, VanderMarel says Ontario’s southwestern region – jokingly referred to as the banana belt – is one of only a few places in Canada where cannabis can really grow outdoors.

“If you look at crop heat units, it really is an ideal area to grow fantastic cannabis outdoor. It’s basically southwestern Ontario and a little tiny part of lower B.C. where you really have the units and the season to grow good, quality outdoor cannabis,” says VanderMarel, who happens to know a thing or two about crop growing.

Farmer family
Coming from a family of Dutch immigrants, farming is in VanderMarel’s DNA. Her family is one of the larger apple producers in Ontario. Even as she pursued a career in health care in her early adult life – as a registered nurse and then as a certified critical care nurse specialist – fate had another plan.

“My daughter, Breanne, was born in 1994. Unfortunately, she had Dravet syndrome. The worst symptom is uncontrollable epilepsy,” VanderMarel recounts. “Despite her being on over 20 drugs, she never stopped her seizures and her development slowed, with the constant seizures and the toll that the drugs were taking on her body. She never had cannabis, I did not know about it then, despite me working in a teaching hospital.”

Breanne passed away in 2003. Carrying on her work at the hospital, VanderMarel eventually came to hear about and have seen families using cannabis to manage epilepsy. That sparked her interest.

“If you’ve ever watched your child have seizures, turn blue and stop breathing, you would cut off your arm to do anything to help,” she says. This led her to explore the possibility of conducting clinical trials on the health benefits of cannabis, but was informed by Health Canada that she needed a research and development licence and would have to grow the cannabis herself.

That started her journey to becoming one of the pioneering women leaders in the Canadian cannabis industry, co-founding and self-funding The Green Organic Dutchman (TGOD) with her husband, Scott Skinner, in 2012. TGOD has since been sold to another entity but the husband-and-wife team still remains as significant shareholders in the company, VanderMarel says.

“I looked at the industry and I saw that there were still gaps… around women (representation), obviously… but as a developing industry it was very ‘stock promoty’ momentum play. There weren’t any real metrics… no one seemed focused on profitability, diversity, corporate social responsibility, ethics – all those things that I think a good corporation needs.”

Good & Green was later acquired by another female-led corporation, 48North. VanderMarel now shares the CEO role at the newly merged companies with 48North’s Alison Gordon, a structure that capitalizes on each woman’s unique leadership strengths. VanderMarel is focused on the operational management of the 46,000-sq-ft. Brantford facility, the 100-acre outdoor farm, as well as 48North’s 40,000-sq-ft. indoor cultivation and processing operations in Kirkland Lake, Ont. She also looks after government relations and human resources. Gordon, meanwhile, is focused on sales, marketing and investor relations.

48North co-CEO and director Jeannette VanderMarel believes cannabis belongs in the outdoors. So she’s leading the charge in making outdoor cultivation the norm in the Canadian cannabis industry.

Outdoor, organic
The 100-acre farm will be 100 per cent organic, says VanderMarel. Most of the cannabis crop that will be produced from The Good Farm will be destined for extraction to produce 48North’s next generation of products in the health and wellness consumer space.

In the Brantford facility, dozens of large bags of organic soil are sitting in the warehouse, waiting to be placed on the ground once cultivation commences.

“We’re basically doing it like field tomatoes,” VanderMarel explains. “We will be laying rows of plastic mulch on the ground with dripped irrigation underneath. We’ve done hundreds of soil tests. We bought all our organic soil amendments that we’re going to be putting on the farm. The soil has the fertilizers and nutrients right in it so when the plants go in, they simply draw what they need.”

The farm will use watering ponds and existing wells for irrigation. Except for water, nothing else goes in the plants, the 48North executive says. “It’s a pretty simple method of growing. It’s our first year of growing so we want to make sure we are using standard growing methods. The farm across the road is growing tomatoes in the exact same method.”

As with its indoor cultivation, beneficial insects, such as mites and nematodes, will be used to prevent the influx of pests in the farm, and they will be placed on the soil during the early stages of planting.

The growers will also be relying on nature to help nurture the plants. “Plants in general release terpenes and essential oils, and they do that on purpose to deter pests and insects and other rodents,” the farmer-turned-CEO explains. “Cannabis releases a lot of terpenes. Plants have evolved that way to protect themselves.”

“A lot of indoor growers actually use UV light to try to mitigate pests; we have it naturally outdoor,” VanderMarel happily notes.

More than a pest buster, the sun also helps the cannabis grow larger than they would ever do indoors, where they are only exposed to artificial lights and light penetration into the plant can be limited. “The sun penetrates all the way through.”

The company is anticipating two growing cycles within a year. Seeding will begin indoors at the Brantford site. The plants will then be planted on the farm during late May or early June. Two varieties of cannabis will be planted outdoors. First are autoflowers of the ruderalis phenotype. These types are not dependent on light cycle, according to VanderMarel, and generally grow to maturity in 10 weeks or under.

“It will flower under longer periods of light. As you know, we get a lot of light in the summer time,” she says. “We hope to actually get two crops of that plant.” Planting in late May or early June will allow for harvesting by end of July. A second batch of seeding will begin in mid-July and will be planted on the farm immediately after the first harvest. The second harvest will be done at the end of September.

The second variety will be cannabis strains that are known to be ideal phenotypes for outdoor growing, the 48North executive says. “Those ones are more dependent on the light cycles.”

Sustainable option
Using outdoor farms for low-cost, large volume quality cannabis production not only makes sense economically, but environmentally as well. The cost of producing cannabis in a large-scale indoor facility is between $1 and $3 per gram, according to estimates by cannabis consulting firm Cannabis Compliance on its website. Outdoor farming, on the other hand, could bring production costs to below 0.20 cents per gram, the company notes.

“It just does not make sense to grow it indoors,” VanderMarel states. “Growing cannabis indoors does create good, quality products but it’s not environmentally friendly.

“I think consumers really do care about whether their products are grown appropriately and sustainably. I would really like to be a carbon-negative company.”

If the latest report from Nielsen is any indication, sustainable production practices are increasingly becoming the norm.

“Looking for a better lifestyle, consumers are searching for options that are healthier for them and for their homes,” Nielsen states in a November 2018 article, “Sustainable shoppers buy the change they wish to see in the world.”

With the impending changes to the Cannabis Act to allow for the legal production and sale of cannabis-infused products such as edibles, extracts and topicals, the cannabis industry is poised to expand its consumer base to non-traditional cannabis users. As the cannabis market opens up to a wider consumer population, the case for corporate social responsibility and environmental sustainability gets even stronger.

“We have two indoor facilities that we try to manage as well as we can using LED lights and glycol-based HVAC so we’re not putting a huge strain on the environment,” VanderMarel says. “The bulk of our products, pending Health Canada approval, will come from the outdoor grow. And the electricity needs and the infrastructure needs are minimal compared to what we need for an indoor grow.”

48North, and VanderMarel in particular, is on the path to making all cannabis products coming from the organization all-natural and organically grown. The indoor production facility in Brantford is already growing cannabis organically. VanderMarel is currently leading the charge in transitioning the DelShen indoor grow to full organic cultivation.

VanderMarel is no stranger to organic certification, having gone through the process with her first “baby” TGOD for Ecocert certification.

“I think it’s important as a market differentiator, but also for our target consumers,” she says. “We know that the organic shopping basket is getting bigger weekly. Also, consumers are getting more aware of what they put in or on their bodies.”

Security
One of the biggest infrastructure investments in outdoor cultivation is the security system. 48North spared no expense in ensuring that its farm is equipped with the latest security systems to protect its crops from any type of breach.

“Under Health Canada, we have to be aware of any actual or attempted intrusions. Whether it be at our other sites or our farms, we can detect someone before they even approach the fence,” VanderMarel says.

“On top of that we have everything from infrared sensors, vibration sensors, invisible lasers. There’s a lot of security infrastructure that we’ve put in place in there that we feel exceeds the expectations of Health Canada.”

The company also recently hired a new head of security; a retired local police officer from Brantford who also runs a security company.

A large security force will be present at the farm, especially during harvest time, VanderMarel adds.

Mari-Len De Guzman is the editor of Grow Opportunity. Email her at mdeguzman@annexbusinessmedia.com.