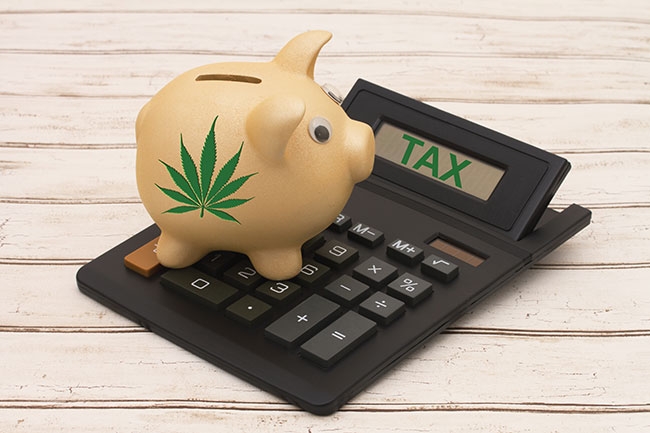 There are also sales taxes being charged on recreational cannabis at the retail level. In provinces like Saskatchewan that have sales tax levels lower than other provinces, an excise duty will be charged to producers to make the tax rate similar across all provinces and territories.

There is also a federal excise duty of $1 per gram or 10 per cent of the price, whichever is higher. Twenty-five per cent of this tax goes to the feds and the remainder to the provinces/territories.

The federal government has also decided that licensed producers (LPs) will pay an additional annual ‘cost recovery’ levy of 2.3 per cent on gross earnings. Over the summer, Health Canada held a 30-day public consultation on the levy, during which it received 108 online submissions, 18 written submissions and 755 form letters. In addition, the agency hosted four online information sessions with industry to explain the proposal and to answer questions. Health Canada says the feedback it received focused primarily on the timing of implementing the proposed fees, the design of the annual regulatory fee and the desire for additional service standards.

What hasn’t changed from the proposed regulations is that Health Canada, to promote a diverse market with both small and large players, “will scale fees according to the size of the business and apply lower fees for micro-scale LPs. In addition, some classes of licences – namely those for research, analytical testing and hemp production – will be exempt from fees.” Those who produce, cultivate and sell cannabis exclusively for medical purposes are also exempt.

However, due to the feedback it received, Health Canada says it modified the levy to use the previous year’s gross revenue to calculate the fee rather than forecasted gross revenue.

“These measures will help moderate the financial impact on the emerging industry in the early years following coming into force of the Cannabis Act,” states the agency. “In addition, Health Canada is committing to monitoring its administration of the regulatory program closely to ensure it recovers no more than the regulatory costs and with a view to establishing defined service standards in areas such as the processing of licence amendments.”

Health Canada is also committing to create a forum to engage with the cannabis industry on the administration of the fee regime and as it develops additional service standards, “supporting predictability and transparency.”

Allan Rewak, executive director at the Cannabis Council of Canada, reports that while the industry had long anticipated some sort of cost recovery and was part of the consultation process, it didn’t anticipate the gross income aspect and that the levy would be applied in year one of recreational legalization.

“We believe the application of the levy to gross revenues in year one is a mistake,” he says. “That should wait until the legal marketplace is more robust. The government has always said that the point of legalization is to keep cannabis away from youth and to prevent organized crime from benefiting from selling cannabis through the black market. That requires low prices and this cost recovery levy will make legal recreational cannabis more costly to consumers. That being said, the adaptations that have been made from the regulatory proposal to the actual are positive and give us something to work with.”

Matt Ryan, vice-president of marketing for National Access Cannabis (NAC), notes that Health Canada undertakes cost recovery measures in a number of industries, including pharmaceuticals and medical devices in order to cover costs of regulation, licensing, compliance and public education. He believes “the cost-recovery levy won’t stop the growth of the cannabis industry. We also believe the levy will decrease over time as the industry matures.”

Manitoba Liquor and Lotteries (MBLL) will apply a wholesale markup of $0.75 per gram on the wholesale price of non-medicinal cannabis at the distributor level, as a placeholder to the provincial share under the Canada-Manitoba Coordinated Cannabis Tax Agreement. The MBLL will also apply a nine per cent markup on the wholesale price of non-medicinal cannabis, also at the distributor level, consistent with the approach of other provinces imposing markups in addition to the federal cannabis excise tax.

However, a ‘Social Responsibility Fee’ of six per cent of annual revenues on recreational cannabis sold at retail will be applied, effective in 2019 and first payable in June 2020. A provincial media relations spokesperson states that this fee is being applied because legalization of recreational cannabis will include various public education, safety, enforcement, health and addictions costs that fall almost entirely to the provincial level of government. The fee will ensure all provincially-licensed cannabis retailers share in these costs.

“Revenue is difficult to forecast because of a number of variables: the ability of LPs to provide sufficient volumes to meet demand; the level of demand and access to supply influenced by retail outlets and municipal bylaws; the penetration against the illicit market; retailer margins; etc.,” says the spokesperson. “These are the challenges of a new market.”

Public education campaigns have been released and others are being developed about the dangers of impairment (related to vehicle operation, the workplace, etc.), the increased safety of regulated and licensed products versus illicit products, the consequences of consumption and excess consumption, how to identify legal product, how much cannabis can be purchased, what remains illegal, and so on.

Overall, the province of Manitoba believes that not charging the provincial sales tax on recreational cannabis will keep prices low. The spokesperson adds, “the provincial markup and Social Responsibility Fee may be adjusted to ensure that the retail price remains competitive and to support the goals of eliminating the illegal market and protecting vulnerable populations, in particular youth.”

Rewak thinks it’s positive that the government of Manitoba has exempt recreational cannabis from provincial sales tax in an effort to keep prices as low as possible in the new legal market. However, he believes that similarly to the federal ‘cost recovery’ levy, Manitoba should let the market mature before it imposes its Social Responsibility Fee.

“I think there’s been a rush to do these sorts of things,” he says. “Market capitalization does not equal sales. It will take time to migrate consumers from the illegal market to the legal market, and we need to let the legal market get up and running before we impose tax after tax.”

First Nations in Manitoba won’t be exempt from the Fee and at least some of them are far from happy about it. For example, Chief Christian Sinclair of the Opaskwayak Cree Nation in Manitoba told APTN (Canada’s national Aboriginal media service and TV network) earlier this year that this was “a shameful approach” that “disrespects our nation-to-nation dialogue.” The Opaskwayak Cree and three other First Nations have now opened retail cannabis locations in the province in collaboration with NAC’s retail business Meta Cannabis Supply Co.

Of the Fee, NAC’s Ryan says all retailers “have an obligation to share in the costs associated with cannabis, including public education and health and safety. This is simply the cost of doing business.”

Treena Hein is a freelance writer from Toronto. Email her at treenahein@outlook.com.