There is no doubt that the Federal Government of Canada’s decision to legalize recreational use of cannabis has opened up huge opportunities for licensed producers across the country. 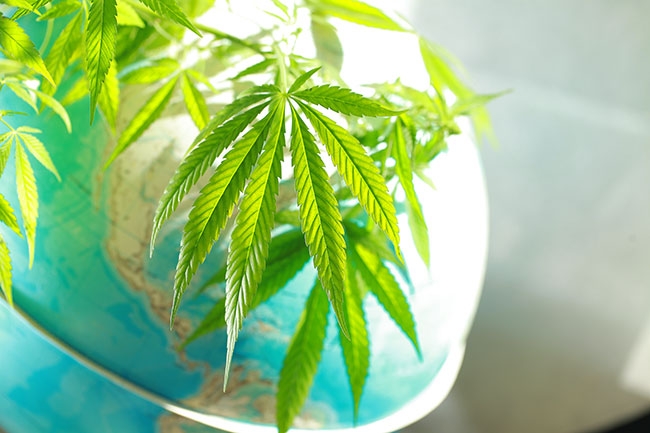 Export Advice: When looking at branching out beyond Canadian borders There is no doubt that the Federal Government of Canada’s decision to legalize recreational use of cannabis

Yet, some Canadian licensed producers have had their eyes turned outward, as an ever-growing number of countries around the world are approving medical cannabis as part of their very own health-care systems. These companies are already exporting to countries such as Germany, Australia and Brazil. For producers considering new markets, it’s important to know how to identify the opportunities — as well as potential pitfalls — of the export market and be aware of strategies that can help them succeed.

“It seems like a month doesn’t go by that a major economy somewhere in the world doesn’t signal that it’s looking more closely at cannabis, whether that’s for medical or for recreational purposes,” says Jordan Sinclair, director of communications at Smiths Falls, Ont.-based Canopy Growth. “The tide has turned around the world. Canada, because of its well-established medical cannabis system, is leading the world. We are the global leader in cannabis production know-how, and that’s manifesting itself all the time.”

David Hyde, owner and principal consultant at David Hyde and Associates in Toronto, says producers in Canada are seeing just the beginning of the export opportunities to come. He expects exports to rise with growing demand for very specialized products: organic products, for example, sun-grown product or particular strains preferred in some markets.

“I think the sky’s the limit,” believes Hyde. “There will be a lot of differentiation. It won’t be just the export of dried cannabis or oils, but, as we broaden out the regulation, we’re going to see the export of starting materials, genetics and different products that become legalized down the road, maybe derivatives.”

In the future, too, he adds, Canadian LPs may be selling to foreign governments. “As more countries legalize, whether it’s for a medical or a recreational regime, you may see their governments control the supply. And to start them off, they may need to purchase part of our supply or backstop their supply with a country like Canada,” he says.

Canada has an opportunity to lead the world in medical cannabis exports, says a spokesperson for Nanaimo, B.C.-based LP Tilray. Some countries, including Germany and Mexico, that have legalized medical cannabis are still years away from having a domestic supply chain, so they need the product Canadian producers can provide.

Currently, Tilray is seeing strong export demand for pharmaceutical-quality medical cannabis products that are precisely formulated and easily titrated and that can be ingested orally, such as liquid drops and capsules. “Those formulations are more familiar to patients, physicians, governments and regulators, and in some jurisdictions they are in fact the only permitted form factors,” the spokesperson says.

In addition, most countries require medical cannabis products, regardless of type, to be produced using Good Manufacturing Practices (GMP), which is the most rigorous standard that manufacturers of medical products must meet in their production processes.

“The fact that companies in Canada can go public and can access public money creates an opportunity for licensed producers to expand and to service both the domestic market and some export opportunities.”

More importantly, he adds, because Health Canada established rigorous standards for cannabis exports, people in other countries trust Canadian LPs and know that the quality of cannabis grown in Canada complies with strict government regulation.

“It’s because of that trust factor, Health Canada’s licensing regime and the fact that there are very strict regulatory requirements and oversights that other countries are comfortable relying on the work that Health Canada is doing,” asserts Sherman. “It has provided a unique opportunity where, in Germany, for example, you’re seeing a large number of Canadian licensed producers going through the licensing regime there.”

Exporting producers have, however, obstacles to watch out for. For instance, there is an extensive legal terrain to navigate, Hyde says. First, they must receive an export licence through Health Canada, which requires them to meet conditions regarding, for example, product standard and record keeping.

Producers must also deal with international supply agreements, and when dealing with a foreign country, it can be difficult to know which laws apply.

“The licensing for you may be in Canada, but the licensing for [a partner company] may be in Germany, for instance. If things get a little bit grey in the middle, you could have a level of risk in complying with the German regulations — and also in dealing with business laws around getting paid and other such things. There are international business risks that will be in play,” says Sherman.

Different methods of record keeping in foreign countries may also increase an exporter’s risk. Where every transaction is tightly controlled, as in Canada, tracing product to each patient who bought some is fairly straightforward. But another country may not have the same record-keeping system or the same traceability.

“There is a level of risk on the LP in Canada,” adds Hyde. “If they have a recall and it touches a foreign supply, how much can that recall be facilitated in a country where the regulations may be looser than ours?”

Another difficulty, Canopy’s Sinclair says, is the regulatory uncertainty that exists in many countries today. The legal situation in the U.S., for example, has created a very unclear business environment. The law differs from one state to another, and federally it remains illegal to conduct cannabis business. “As a publicly traded company, that precludes us from participating in that market,” he says.

“On the up side,” he adds, “it allows us to build a strong lead in North America and build on the lead that Canada already has without competition coming from south of the border.”

When identifying potential new export markets, Canopy, in addition to a clear federal legal framework, looks at population sizes and the type of medical system a country has. “If they have socialized medicine,” explains Sinclair, “this is certainly an advantage for a company because you are not introducing a product that will be paid for by the end consumer, which unfortunately is the case today in Canada.”

With the all uncertainties and complexities in regulation, Sherman says producers who want to get into the export market should secure the advice of someone who is well-informed about cannabis legislation and Canadian export and trade regulations. The company also needs to find good advisers on the ground, in the jurisdiction that will be importing the product.

Then, he adds, the producer must make sure to conduct all its activities in strict compliance with the law. “So, it’s important to have good advisors to navigate that process and make sure you’re conducting operations legally and in the most efficient way possible.”

“It’s an amazing boom time for Canadian cannabis companies,” he says. “The ones that act quickly now are going to reap the rewards.”

Linda Johnson is a freelance writer in Toronto.