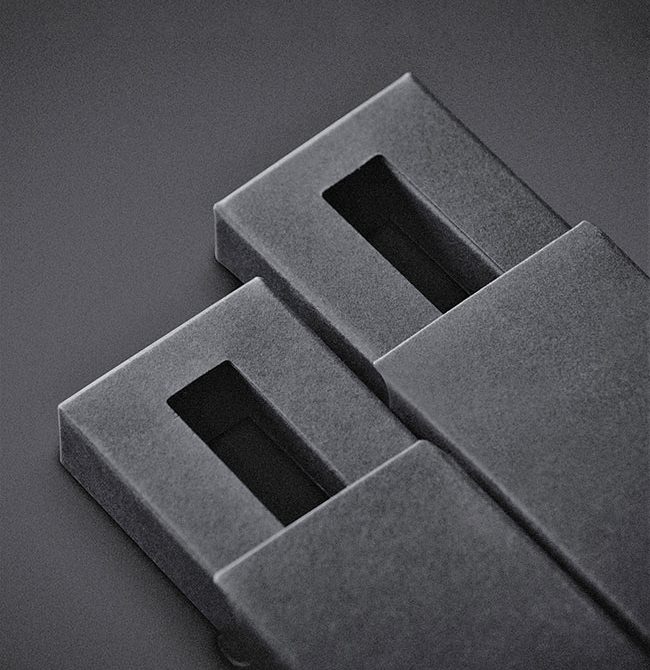 Finding an environmentally-friendly alternative to plastic is a challenge for most consumer packaged goods companies these days, but the cannabis sector faces a complex challenge in showing consumers it’s taking that responsibility a step further.

For many, it’s about living their brand values. With Health Canada’s requirements that cannabis containers be child-resistant and tamper-proof, plastic jars have primarily been the norm. But they are also the source of much consternation for buyers.

For Josh Adler, director of operations at Aqualitas Inc. in Nova Scotia, the journey to find a more sustainable alternative to jars has been a bit of a personal quest. Being located so close to the water, it was a constant reminder that plastics are polluting the ocean. But there was also a daily reminder at home. “My wife is a marine biologist,” he says, recalling her shock when she first saw the packaging used for cannabis.

It has been estimated that a 3.5-gram package of dried cannabis is packed in more than 70 grams of plastic. The reality is that most plastic, if it gets rejected by a recycling program, goes to a landfill or the ocean. About 12.7 metric tons of plastic end up in the sea every year. Canadians throw away three million tonnes of plastic waste each year and only nine per cent is recycled, according to Environment and Climate Change Canada.

“It’s tough to make a child-resistant container in the traditional format without using dense plastic,” says Adler, who is based in Brooklyn, N.S. “So we started communicating with suppliers that made food-grade ocean plastic.”

After much research, Aqualitas is turning to reclaimed ocean plastic for its dried cannabis products in specific quantities. From now on, the company’s Reef Organic glass jars will feature an ocean reclaimed plastic lid. The company will use a 100-per-cent ocean plastic jar for its medical products. It will still use an omnidegradable bag from TekPak Solutions for its one-gram flower product and some 3.5-gram pre-roll packages.

“It’s not economical to put that quantity of cannabis in a glass jar and plastic cap for one-gram units, but it’s still a biodegradable bag,” Adler says.

And when Aqualitas was launching its pre-rolls, it connected with a biodegradable straw company that was struggling during COVID.

“We brought them on and made five pre-rolls in a medical product that goes inside a bag,” he says.

A reclaimed ocean plastic lid from Sana costs between 23 and 30 cents US, depending on the quantity purchased. The reclaimed plastic top is child-resistant and used for flower, ointment, creams and salves, and is food-grade certified.

“We have a 60/40 split between ocean and hemp – 60 per cent of our customers are using reclaimed ocean plastic, and 40 per cent are using plant-based hemp plastic products,” he says.

Sana has four reclaimed ocean package products and three hemp-based products. One of the company’s Ocean Tube products is designed for king-size pre-rolls, blunts and vape pens. It features a child-resistant pop-top and is made from 100 per cent reclaimed ocean plastic. 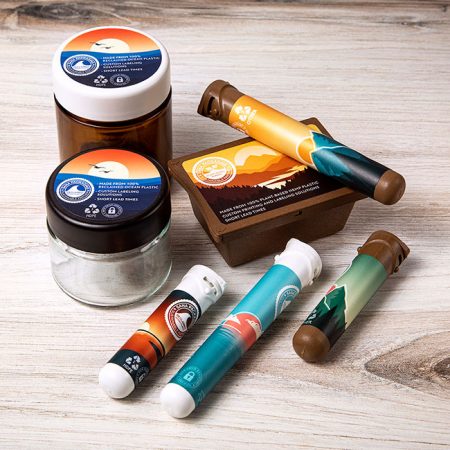 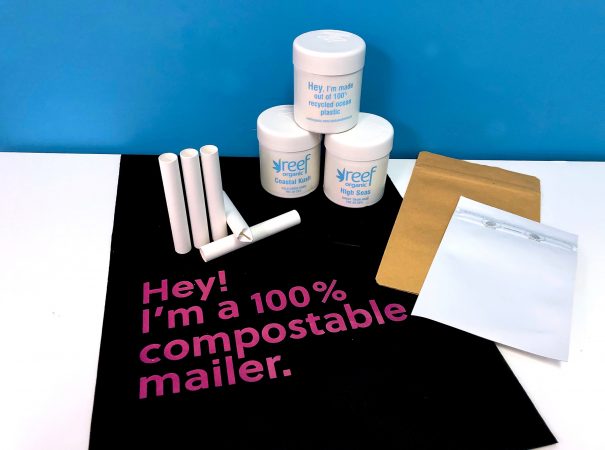 Downward trend
While it costs more to go with ocean plastic or hemp plastic, the price has come down over time. There is also a greater willingness to pay for a better packaging product in the cannabis sector right now.

“We are maintaining a 30 per cent quarterly growth rate and 150 per cent year-over-year growth rate,” says Eichner. “So based on our internal data, I feel confident the industry has a two to three times willingness to pay.”

Sana Packaging started with a product that was two to three times the cost of the cheapest alternatives on the market, says Eichner.

“It’s becoming more price competitive, and we don’t get above double the cost of the cheapest product. A lot of that is due to us being a small packaging startup that is also scaling. We’re increasing the units we’re producing which brings down our per-unit cost. We’re also making larger purchase orders of materials we use and getting better pricing on larger hemp plastic or ocean plastic quantities.”

Sana is also working on reducing the amount of material used in its packaging units. “With our most recent ocean plastic tube compared to a previous version, we achieved a 25 per cent reduction in material – so all those little things contribute to us becoming more price competitive.”

“Where we start to look more expensive is if you are comparing us to the cheapest alternatives on the market such as cheap commodity resins, produced from petroleum overseas. The cost of the negative effects of that material are not included in that, so it’s not a true cost,” Eichner says.

Aqualitas’s Adler says it’s “slightly more expensive, but we got it to a competitive price.”

Rise in recycling
As governments push for greater restrictions on plastics, it becomes a more critical issue for the cannabis sector, especially as consumers increasingly make buying decisions based on packaging.

Enter Cannabis 2.0 products, and a new wave of packaging concerns have been introduced. Vape cartridges are perhaps of the most significant concern, prompting companies to realize it’s a problem they should be dealing with sooner rather than later.

In December, the Cannabis Council of Canada (C3) rolled out a vape recycling program with a handful of licensed producers, and it hopes more will come on board. There are currently 200 participating cannabis stores, and the goal is to see what it would cost to create a national program with retailers.

“The goal is 100 per cent diversion of the product whether it’s glass, lithium, plastic or metal – that nothing goes to the landfill and everything is recycled or incinerated,” says Omar Akeileh, policy consultant at C3. He co-authored a Master’s thesis at McGill in 2020 called, “Chronic Waste: Strategies to reduce waste and encourage environmentally-friendly packaging in Canada’s legal cannabis industry.”

“In future rounds, we can see how the hardware side of the vape equation may be interested in participating as well, and we have been working to bring those players into the association,” says C3 President and CEO George Smitherman.

In August, Auxly Cannabis Group announced a partnership program with Greentec, a certified electronic waste company, for a vape recycling program for all cannabis retailers. Auxly and Greentec are also providing a box for recycling vape pens, cartridges and batteries from all licensed producers. The initiative is led by Kolab Project, an Auxly Cannabis brand.

“We saw that vapes were going to be 16 per cent of all cannabis sales,” says Brad Canario, brand director for Auxly. “When you quantify it into absolute units, you’re talking about more than 10 million vape units. We knew this was going to be a category problem.”

Canario says Auxly wanted to take a leadership stance when it came to vapes. The yellow bins will be prominently displayed in stores.

“For some consumer segments, packaging plays a huge role, and a brand’s purpose and meaning play a role in how people purchase. With Kolab, the consumer cares a lot about the environment, and for us, it’s why we want to make sure that with all of the products, we look at it through the lens of sustainability,” he says.

Auxly’s Robinsons premium cannabis brand is sold in a glass jar with a plastic lid that is recyclable.

“We want to make sure wherever we are using plastic, we use all reasonable means to make sure it is at least recyclable. If we look at the market, there is a lot of plastic that isn’t recyclable. It’s often based on various jurisdictions and municipalities, but we always put our best foot forward to make sure it’s environmentally sustainable,” says Canario.

Collaborative, creative solutions
Smitherman says there has been good leadership on the part of the LPs over time. In October 2018, Tweed and Terracycle launched a cannabis recycling program that accepted all producers’ packaging.

“Canopy has shouldered quite a big responsibility for everybody, but our effort with the vape recycling project is really a recognition that these types of programs are going to be necessary. Accordingly, our theory is that it is better to control your destiny and the pilot is the beginning of that effort.”

Smitherman says it’s a project to mount a response with organizations that are otherwise competitors finding the right means for collaboration.

“Let’s acknowledge that an essential aspect of the whole legalization initiative was the protection of minors. Our packaging is designed with a precautionary principle in mind and then a limited amount of communication discretion. As much packaging as there is, we feel very constrained to give the consumer much insight into the actual product — it’s limited in space and expressly limited,” he says.

He points to 48North’s cardboard packaging that is child-resistant, recyclable and compostable as an example of a company with a good solution.

“I think the industry is looking at more unique and novel solutions. The discussion has to be around the solution rather than anti-plastic,” he says.

The new zip bags some companies are using may seem like a better choice, but the internal liner is often not recyclable.

“It might seem preferable but it is not as environmentally-friendly as a glass jar,” says Smitherman. “Even the ubiquitous black plastic is recyclable, but there is no market for it.”

Eichner says regulators could also help by relaxing the packaging requirements for dried flower packaging. Alcohol and tobacco products are not required to be childproof.

“We would urge the industry to reassess requirements and distinguish between activated (an extract or edible) and non-activated (dried flower) cannabis products,” he says.