Stewart's most striking quality is the spirited authenticity and pride with which the entire team works and interacts with one another. 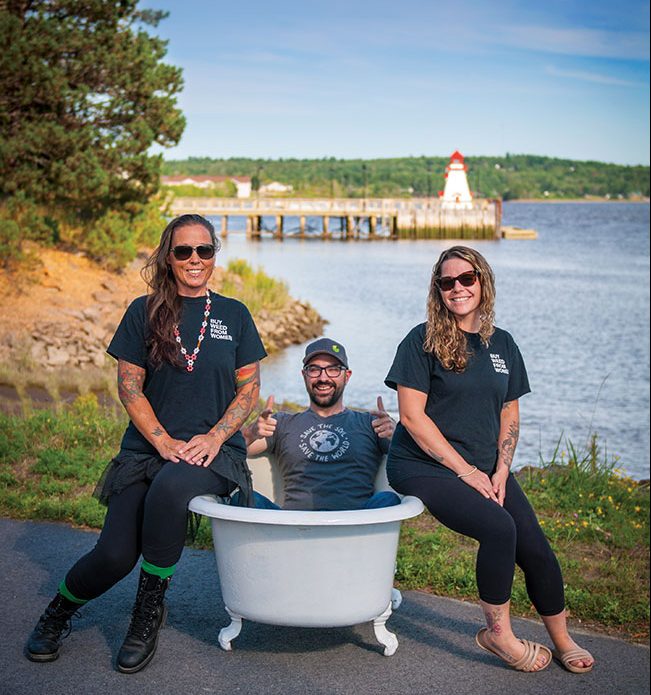 In August, Grow Opportunity ventured to the historic East Coast of Canada to visit a small, but mighty, cannabis company called Stewart Farms, located in the unique border town of St. Stephen, New Brunswick, which sits adjacent to The Bay of Fundy.

It’s here that a team of passionate cannabis enthusiasts cultivates a robust variety of cannabis genetics in a living soil, aquaponic combo system, while manufacturing a line of wellness products, including bath bombs, magnesium-rich bath salts, and pain balms.

From construction, vertical farming, and documentary film production to aquaponic cannabis and infused wellness products, the skillset of Tanner Stewart has made waves across the nation, now extending to the tubs of lifestyle enthusiasts from coast-to-coast. 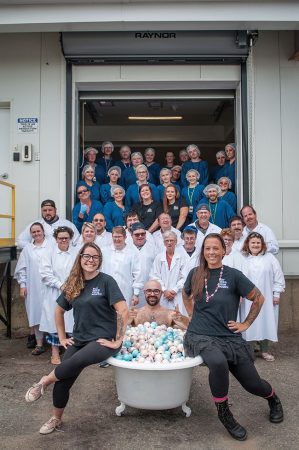 Stewart Farms bares a unique signature as a company that employs a large group of neurodivergent staff, while several of their key management also hold backgrounds in social services.

“These boxes are how we ended up working with the vocational centre,” says Catrina Jackson, while standing amongst a team boxing and labeling bath bombs.

“When we first started, we had all our boxes shipped to us, but they all came in separate pieces that needed to be assembled. We’d be packaging, and then the team would have to stop to go prep boxes.”

“My background, before coming here, was in human services and job coaching people with special needs. So, I looked at it, and I thought: this is an awesome opportunity for someone with potentially limited physical mobility, different skillsets, or neurodivergence.”

“So now we take our boxes to the vocational centre, they prep them, and that keeps our production line running smoothly,” says Jackson.

The art of creating sensual experiences

The wellness products produced at Stewart Farms include infused bath bombs, pain and healing salves, as well as bath salts, such as Seaweed OG, containing real seaweed from The Bay of Fundy.

Jackson explains that the salts were “also designed with different function enhancers, like tremella extract, which is snow mushroom.”

“When we started developing these,” she says, “I tried some of the infused salts on the market and they were literally just Epsom salts mixed with isolates; they settle on the bottom of the tub and then they go down the drain. So that was a wasteful product to me. The snow mushroom works as a natural absorption enhancer so you’re getting the most out of the cannabinoids. They’re also loaded with moisturizing mango butter.”

All the products are handmade using pure essential oils. There are no synthetics used in the process, avoiding potential sensitivities and reactions in users.

“I couldn’t imagine subjecting our team members to synthetic perfumes all day. These are all natural ingredients, like the absorption enhancers use geraniol, derived from geranium essential oil.”

The products at Stewart Farms are medicinally designed even before stacking them with cannabinoids. Jackson and her team blend     botanical essential oils into their products, encouraging an entourage effect.

Moving freely about the facility

The next room was reminiscent of an apothecary where team members mix and make bath bombs, listening to tunes and relishing the scent of terpene-rich essential oils and cannabinoids.

“I had a lot of training in aromatherapy before working in human services — I worked in botanical product development.” Jackson explains.

“When we first launched the bath bombs, they had no cannabis. The whole purpose was to use the bath bombs to educate people that terpenes are not just in cannabis;          terpenes are a main compound in the oils already used in many wellness products.”

In a typical workday, staff might spend half the day completing bath bomb production, followed by a half day of pre-roll production or packaging, after lunch. They are trained in all departments of the operation and are dedicated to their work — a hallmark of Stewart’s operation.

“In our interview questions, I always ask: what’s your relationship with cannabis? You don’t have to be a user, but you need to be an ally. You need to understand what we’re doing, and why. Every person who works here has incredible respect for the plant and what we do; it’s a requirement.”

A look inside the high-energy bath bomb production space.

“Now, onto the weed!” — Tanner Stewart

Within the storage room, amongst racks of curing bath bombs and boxes of salts, stands a white fridge padlocked with a chain. Inside is what Tanner Stewart refers to as the genetic library:

“There’s about 20 thousand seeds and 500 genetics in there, with 30 to 50 to 100 seeds each, of some of the best genetics from breeders on the west coast of California and all over the world.”

“This genetic library,” says cultivation director Genevieve Newton, “is what brought me here to the East Coast — it’s a fridge full of unicorns.”

Newton has been cultivating cannabis for eight years, and professionally since 2018. She completed a six-month production course in Olds, Alta., after transitioning from non-profit work to cannabis.

“When I first got here, the very first week, I dropped 300 seeds. The most stressful thing a grower can do is propagate seeds, and we had a 98 per cent success rate out of this fridge.”

Newton then revealed a room where two tables displayed perfectly green, vegetative plants, with their leaves reaching for the lights.

“Currently this table is holding 111 genetics from our genetic library. Usually, we have two copies of everything. And these are all going to become mothers,” she points out.

Newton uses Koppert biological controls against pests, such as thrips and gnats, and everything at the farm is hand watered.

“I call this the teen mom room,” she says, laughing.

“We’ll show you the little baby room next, and then we’ll take you into the seven and 10 gallon [pot] room, where some of these veg plants go after they’ve been trained. There are moms bigger than you in there!”

The rest of the cultivation team were found in the nursery — or Veg room 2 — where clones of Stewart’s soon-to-be-released Grape strain were being potted into four-inch pots.

“They’re getting basically 100 per cent success rate on rooting these clones,” Stewart smiles.

“We’ve got quality down,” he says. “Now we’re going to ramp up yield.”

“We have proven, without a doubt, that living soil organics can hit cannabinoid numbers the same if not better than           hydro. Now, we’re focused on matching or beating salt grown yields.

“Growing in hydroponics is like you’re driving a speedboat; you can make quick turns as you go. With organics, you’re sailing the Titanic — you have to start turning way ahead of where you want to land later.”

“In living soil, the rhythm and timing of potting-up are critical. That’s your momentum that leads to yield.

“So, if you pot-up too late, then you lose a lot of vigor. You’ve got to hit it within a roughly three-day range. Start in the smallest pot then, boom, you go up to the one gallon, boom, you hit the four gal, and then you’ve got this beautiful biological momentum happening.”

The two largest Grape plants tower in the mother room. All the oldest mother plants at the facility have provided at least two generations of clones, and the smaller mothers in the room still have another pot size to move into.

“I’ve worked in other facilities where the mothers are neglected, and I’m so proud of these ones,” exclaims Newton.

“Another thing that my team is all over,” says Stewart, “is energy consumption! The mothers need less light, so I’m saving 50 per cent energy in this room because they’ve gone and turned off every second LED while keeping the light on the canopy even.”

“What we have here, is a group of people that pay 100 per cent attention to everything,” says Stewart, proudly.

Newton proceeded to lead the group into the hang dry and curing room, feasting their eyes on  a room full of tasty buds.

The tour then concluded with a look at the onsite fish farm consisting of two tanks of about 300 Black Nile Tilapia. The fish provide their nutrient and microbial-rich wastewater as a supplemental tea to enhance the performance of the living soil-grown cannabis.

Upon completion of the facility tour, evidently Stewart Farms is an LP operating with a high level of integrity, directed by the spirited, well-informed staff that Tanner Stewart seldom forgets to thank for their efforts.

The LP has become a model farm, demonstrating dedication to an important cause, all while creating meaningful medicine and core memories for many.