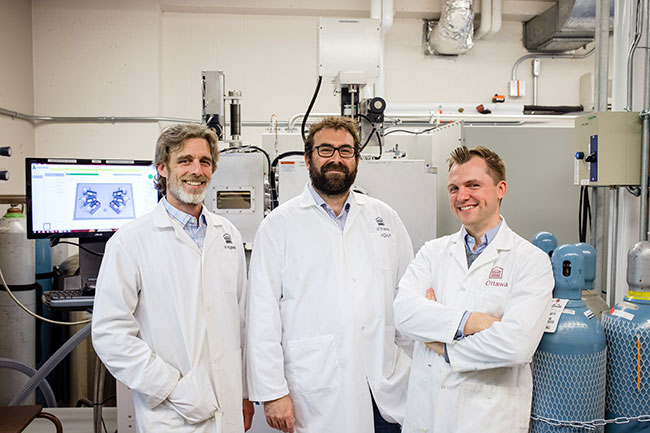 This trio of University of Ottawa scientists developed a prototype handheld device that can measure CBD and THC ratio in a given sample. (L-R): Cory Harris, Adam Shuhendler, Benoit Lessard Photos: University of ottawa and dr. adam shuhendler

About three years ago, after the Liberals unveiled their bill to legalize recreational cannabis, Adam Shuhendler got curious. He had been talking to his wife, a policy advisor with a nursing organization, about all of the regulations that would be coming out and the first question he had was: How would they regulate the actual sensing of the product? How, for instance, would police detect cannabis in a vehicle? Or how would producers have to determine THC and CBD ratios?

It makes sense he had these questions; Shuhendler is a chemistry professor at the University of Ottawa interested in chemical sensing. Eventually his curiosity led him to U of O colleagues Benoit Lessard, who specializes in organic electronic devices, and Cory Harris, whose lab focuses on licensed cannabis research and analytics. Together, they realized that there was a technology gap that they might be able to fill: rapid cannabis detection. Then, as now, most producers and labs test the ratios of THC and CBD using slow and expensive technology, usually high-performance liquid chromatography (HPLC). But, they thought, if there was a way to integrate chemical sensors into organic electronics for the testing of cannabis, they could be on to a much faster, cheaper, and easy-to-use solution.

Fast forward three years and that thought has translated into a hand-held prototype that can detect the presence of cannabis as well as measure the ratio and potency of THC and CBD in a sample. About the size of a two-slice toaster, the device’s sensor looks like a microchip. Using it first requires shaking a cannabis sample in a special liquid and then applying that liquid to the sensor. Within a couple of minutes, there is an output. Users can also just put the sensor in vaporized material and get a reading. “We kind of joke: if you have a thumb and a finger than can apply a sample and push a button, you can run this thing,” says Shuhendler with a laugh.

The three researchers recently launched a company called Ekidna Sensing to support the commercialization of the device, but right now they are getting the prototype into the hands of LPs of different sizes to get their feedback, as well as talking to venture capitalists and angel investors. They’re hopeful about the future, they say, one reason being because there are examples of similar scalable technologies, like the OLED on your cellphone. “Scaling costs money, that’s all,” says Lessard.

The gold standard
Scaling also means understanding the technologies you’re up against, and in their case, it is, by and large, HPLC. Considered the gold standard for cannabis analysis, an HPLC machine can cost upwards of $100,000, and that’s on top of paying analytical chemists to run and maintain the machine as well as other inputs, such as solvents. The machine can also take up a lot of physical space.

For all of these reasons, some producers use outside labs to analyze their cannabis. James E. Wagner Cultivation (JWC), in Kitchener, Ont., is one of them. The LP uses A&L Laboratories in London, Ont. While JWC’s chief compliance officer Laura Foster says A&L is reliable, consistent and accurate in its analysis, the wait times, as with almost any lab, can be lengthy. “That’s the main downside for us,” she says. “Generally speaking, we have to wait until the drying process is complete and then collect the representative sample, ship that off, and then it usually takes about a week for turnaround on just simple cannabinoids. And it’s a full two weeks for the full complement of testing, which includes pesticides, microbial, all of that.”

Those wait times are the main reason why JWC is currently looking for a piece of technology they can use in-house in their operations. There is a growing number of non-HPLC options for them, but many use photonic analysis rather than the U of O researchers’ electrical analysis. Photonic can be sensitive, but the technology can be expensive, and it’s not always portable or easy to use.

The reliability and accuracy of some of these technologies have also been questioned. Shuhendler, Lessard and Harris have tried to allay those concerns by comparing their device to HPLC. The results were published in the October issue of the journal ACS Sensors in a paper entitled, “On-the-Spot Detection and Speciation of Cannabinoids Using Organic Thin-Film Transistors.” The study shows that the U of O researchers’ device can derive THC to CBD ratios that are within ± 2.5 per cent of the ratio values provided by HPLC analysis of the same samples.

The analysis device developed by three University of Ottawa researchers includes a small sensor that looks like a microchip. The cannabis sample must first be shaken into a special liquid. The liquid is then applied to the sensor to get an analysis.

Next steps
While those results are promising, much still needs to be done before the device can reach commercial availability. For one, when the researchers did their study, it was in a controlled lab environment. They have to figure out if the device needs to be tweaked to work optimally in environments that might be cold or humid, for example.

They also need to continue meeting with industry and putting their prototype in producers’ hands to get their feedback. They did develop that protype after a year of industry consultations, but more testing needs to be done. “We need that feedback to know if it’s faster they want, or is it more sensitive analysis they want,” says Shuhendler. “Because it depends on the application; they might just want a yes or no, another may want quantification.”

For JWC, Laura Foster says this technology might help them develop new products a lot more rapidly. When JWC grows a batch of new test plants now, they have to send each of those samples to the lab for cannabinoid testing. But if they could do that testing in-house with a device like this, they could quickly identify the plants they would want to continue growing and forget or adjust the others, she explains.

Feedbacks from multiple user types might lead to multiple versions of the technology. Law enforcement agents might just want to know if there is THC in the air, for instance, so they would need a much simpler device than what a producer would. Likewise, the hemp community might just be interested in a straightforward THC to CBD ratio, so that could also mean a different device. The researchers have also thought about developing a device for home growers who are serious about what they’re producing in their backyards. “The sensors that we’re building have the potential to give us all of this information, so it’s going to all depend on who is buying it,” says Lessard. “But there is potential to hit all of these markets; we’d just need to tune the technology.”

And again, they would also need to scale. But Shuhendler, Lessard and Harris think they can. “As a technology, there are roadmaps to commercialization, so it’s not unreasonable for us to say, ‘Okay, we’re making 20 in the lab a day,’ but that could be scaled and we could make thousands of these and get them in the hands of every producer or home grower in Canada or North America,” says Lessard. “It’s not an unreasonable request.”

Time – and money – will tell if they’re right.

Jordan Whitehouse is a freelance writer based in Kingston, Ont.