Features Cultivation Production
Up and away 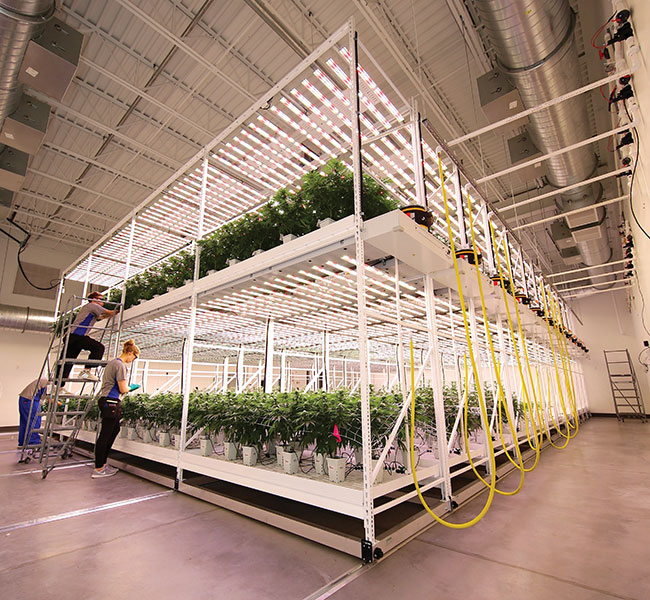 It’s no mystery as to what has enabled vertical cannabis cultivation to be successful in Canada and beyond in recent years. It’s a pretty simple matter of new developments in both technology and knowledge.

The main tech development is the availability of LED lights, which of course can be placed very close to plants (within a vertical or conventional growing system) without harming them. In addition, collective understanding of air flow in warehouse growing environments has also grown, says Nico Haché, who has almost two decades of controlled cultivation experience and is now director of cultivation operations at Deloitte.

“Your biggest challenge with vertical growing is climate control,” Haché explains. “Ideally, you want to have identical air flow, light, temperature, humidity and so on, everywhere in the vertical system. But controlling the climate is less about the unit of space, and is much more affected by plant mass. So it must be adjusted through the production cycle.”

Haché adds that although every vertical facility is different, there is more labour involved in managing these facilities (in terms of trimming, etc.) compared to conventional. There also has to definitely be, in his view, “more thinking about the entire production process with vertical growing.”

A majority of Canada’s larger vertical producers, such as Ontario’s Vertical Cannabis in Chatham and GreenSeal Cannabis in Stratford, planned for multi-level growing from the get-go.

Vertical from the very start
GreenSeal started with two cultivation levels in its first flower room before going to five levels in the next one, explains Phil Niles, executive vice-president.

“We were able to make this substantial jump because we spent our first few years doing substantial R&D work on every conceivable variable, from lights to growing medium to pots to nutrients to grow times and more,” he says. “As great as our five-level room was, we still found room for improvement following longer observation and experimentation, which led us to our latest room which is six levels high.” The firm is now planning a new eight-level vegetative growing space.

Vertical growing meant that GreenSeal would save costs related to expensive licensed square footage at the time of construction, which happened around 2015. They had also established methods that would allow higher labour efficiency for multi-level systems. In addition, learning the vertical way would mean that in the future, “GreenSeal could easily deploy its model anywhere in the world,” says Niles.

GreenSeal has developed a large amount of proprietary vertical cultivation technology and has worked hard to solve issues that range from building code requirements, environmental control and genetics to cost, production methods and staff training. “For example, electrical safety dictates that you cannot have a water source above electrical outlets, so we had to solve for that, to make it safe,” says Niles. “Second, managing temperature and humidity is very difficult as warm air and moisture rises, so we had to determine how to keep the top levels consistent with the bottom levels. Third, water and nutrient delivery is a challenge, as gravity will distort the delivery of nutrients and water when comparing the top and bottom levels, so this also needed to be solved. Finally, there is cost. While the variable cost per gram is very competitive, especially for the quality of the product, even a relatively small flower room can cost millions of dollars, so such a system requires a major upfront cost for even a modest footprint.”

Some vertical growers like GreenSeal have chosen moveable rack systems, which are now offered by major rack manufacturers such as Montel in Quebec and Pipp Horticulture in Michigan. Moveable racks allow vertical growers to use all of their horizontal space, eliminating wasted fixed aisle space. Curtis Dadian, sales rep at Pipp, explains that this provides workers with all the space they need to perform critical plant care and maintenance. Yves Bélanger vice president of sales at Montel, adds that benefits of their systems include complete customization and accessories to adapt to crop requirements. 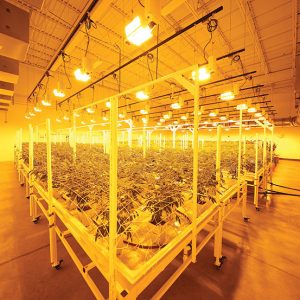 Once LeafLine Labs’ remodelling was complete, the company’s canpoy within the flower room increased by 140 per cent. Photo: Pipp Horticulture 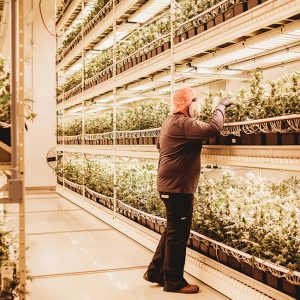 The successful switch to vertical growing takes much planning, prior to making the actual switch, as pointed out by GreenSeal growers. Photo: GreenSeal Cannabis Co 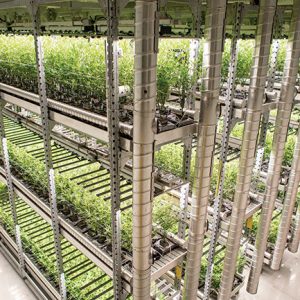 Another vertical operation in Ontario
As is obvious from its name, Vertical Cannabis had always planned for multiple levels since before cultivation began about three years ago. The operation is housed in what was previously an auto parts plant, with ceilings of about six meters. One section of the facility has three stationary growing levels and another has four. Workers use scissor lifts to reach the second, third and fourth levels.

Master grower, Chad Brian, notes that back when they were in their first production phase, he and his team did need to step up dehumidification, but this was unrelated to vertical cultivation and simply a matter of adjusting to greater plant volume.

However, in terms of vertical growing, Brian reports no challenges managing flowering onset, disease or height of plants. “We observe each new strain in terms of plant habit, but we need to trim the central stalk with all varieties and we also defoliate if there is too much vegetative growth,” he explains. “At this point, we’ve developed about 14 strains, and we will continue to develop others to provide customers with an ongoing selection of new terpenes and flavours.”

Switching to vertical
With all of the hard work GreenSeal has put in to successfully grow vertically, Niles and Chad Morphy, master grower, caution those who are thinking of switching to vertical to think it through carefully. “You cannot simply take what you’re doing today from a cultivation perspective and just put the same methods onto X number of levels,” Niles says. “All facets of your grow, from start to finish, need to be evaluated and potentially, revamped.”

For example, going to six levels from one level requires six times the number of mother plants, six times the vegetative space and clone space, more labour, more post-harvest management space, more capital expense, more ongoing maintenance and repairs, etc. “So, all things put together,” says Niles, “we do not advise considering a vertical grow without first considering these, and countless more, variables.”

In an effort to prepare for increasing demand, LeafLine Labs in Minnesota began their transition to vertical in 2018, and has made the switch successfully. They converted one of their cannabis cultivation flower rooms that year from a single-level HPS room to a multi-level room with LEDs and Pipp mobile vertical racks. “With 20-foot tall ceilings in our facility, multi-level vertical cultivation provided an opportunity to increase canopy space within the existing building’s footprint,” says Emily Kowalski, vice president of cultivation. “After the remodel, our canopy within the flower room increased by 140 per cent.” Since then, LeafLine has transitioned its propagation room to multi-level, with the rest of its indoor cultivation space to follow.

“As with any indoor cultivation space, it is important to design for the control of all plant growth variables,” says Kowalski. “Beyond that, my advice to growers transitioning to vertical cultivation is to think beyond the design of the room and be sure to plan the timing of plant maintenance, labour needs and staff workflow, as well. Prior to growing the first batch on a vertical system, growers must ensure that their team has all of the tools and supplies they need to successfully execute the work on each level of the vertical cultivation system.”

Kowalski believes the integration of vertical cultivation at LeafLine “has reinforced the importance of openness to new ideas, feedback and free-flowing communication between all members of the cultivation team in order to identify efficiencies. Cultivating cannabis on a vertical system is an adjustment, but the results have been well worth the time and effort.”

However, he sees significant interest in overall growth in the small craft, high-quality producers that supply the large Canadian companies – and those small license holders want to expand upwards.

“Many of these operations are housed in smaller industrial buildings with ceilings about 21 feet high,” Haché explains. “It’s been easier for these companies to find and purchase/lease these buildings as opposed to larger, flatter buildings, and so they’re already set up for possible vertical growing. However, some smaller producers are also building brand-new buildings for vertical production.”

These small craft firms, continues Haché, seem interested in investigating vertical cultivation using all kinds of set-ups: conventional, aeroponic and hydroponic. He reports that no matter the set-up chosen, equipment suppliers have already stepped up to meet the needs of vertical growers, and also that a number of integrated provider partnerships have formed among shelving, lighting and ventilation companies, making going vertical, easier than ever.