Features Production
From Horticulture to Cannabis

A decade ago the last thing you would want to hear is that your business has gone to pot! But that was then and this is now; it’s an old idiom worthy of a new definition. 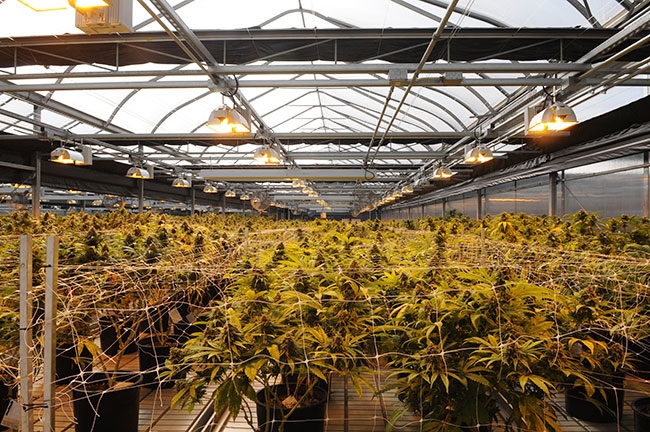 The times, they are a-changin’!

As you consider the value proposition of the marijuana crop for your greenhouse business, be mindful of these necessary steps on your road to success.

1/ You need to understand the regulations and application process for your geographic region. And you need to stay on top of ever-present changes.

In Canada there are federal regulations in place for medical marijuana. But we can hardly go a month without learning of a new adjustment to the system that sends applicants in a flurry of activity to catch up to the new set of rules.

2/ Solidify local government relationships. We have seen more deals go sideways because a town or county has not welcomed the idea of a marijuana grow operation.

Basic business strategic planning requires you to know weaknesses and threats; don’t just get caught up on your strengths and opportunities. Finding out early that your mayor will never back your marijuana growing plan lets you refocus on another site, or abandon your plans before there are large expenditures.

3/ Fine-tune and document all your procedures.

Standard Operating Procedures (SOPs) are the lifeblood of the application process. Marijuana is a controlled substance, so there are rigorous tracking, tracing, access, handling, and cleanliness procedures, etc. You may consider hiring a consultant for this part of the application process. We have worked with several good ones and can provide growers with assistance in this direction.

4/ Security is not a concern for most greenhouse growers … until you start growing marijuana.

If you’re a typical greenhouse grower, you never thought greenhouse security would be one of your top concerns when planning your next expansion. Welcome to marijuana growing. Not only is your greenhouse crop now incredibly valuable on the open market, and therefore a target for theft, but extensive security systems are part of every licensing regulation.

Hybrid greenhouses, with metal walls, and glass or poly roofs, have become very popular for marijuana businesses in part for the perceived value of hiding your crop from public view. While the greenhouse structure itself can be modified for additional security you will want to work with an experienced security team to design a complete package.

5/ Understand the market. This is not your normal flower or potted plant consumer.

Marijuana enthusiasts are passionate people, many of whom have been fighting for marijuana recognized status for a long time. If you’re prepared to be really engaged with the marijuana industry then you need to understand how and why it’s used.

Medical marijuana users have different plant needs than adults who choose to consume marijuana for personal enjoyment. Strain selection, processing decisions, sales and distribution will all vary depending on who your target consumer is.

Advertising and marketing restrictions on a plant that is classified as a drug won’t make reaching your intended customer base easy. Joining industry groups, reading cannabis trade magazines, and attending marijuana business trade shows will get you started in the right direction.

6/ Harvesting and testing cannabis requires new processes that are not part of typical horticulture production.

While there is an emerging market for cannabis propagators who sell starter plants to other licensed growers, the vast majority of marijuana growers will be harvesting the bud. This marijuana flower is then dried before packaging for sales. Not only does the marijuana grower need to have a drying room, but also marijuana testing is required by every state and across Canada. Some growers have set up in-house testing facilities, but most will work with an accredited lab to test their marijuana for moulds and pesticide residue.

In addition to selling marijuana flowers, many growers have vertically integrated into processing cannabis oil. Further processing may raise the value-added product offerings of a marijuana grower, and it also provides a use for the cannabis leaves. All of these additional processing considerations need to be part of the marijuana growers overarching business plan.

7/ Realize that you don’t know everything about growing marijuana plants.

We have heard from some growers that they don’t need help with the cultivation side, because cannabis is just another plant and they know how to grow plants. But I don’t know too many tomato growers who would switch to growing lettuce in their greenhouses without spending time to learn about the new plant.

There are many growers who have grown marijuana under medical licences for years; discounting their knowledge is a mistake. Find growers who are open to change and also realize they don’t know everything. As marijuana legalization spreads around the world the importance of merging cannabis growing experience and horticultural production efficiencies will continue to grow.

8/ How you grow will be partly determined by your marijuana licence.

Depending on the licensing regulations that you fall under it may be more desirable to grow large cannabis trees, or it may be preferable to grow smaller plants with a denser footprint (referred to by marijuana cultivators as sea of green). Irrigation, benching and material handling equipment are some of the systems that will need to be designed with the cannabis cultivation licensing limits in mind.

9/ Modify your greenhouse environment to provide the ideal crop environment for cannabis growing.

We can retrofit existing greenhouses, or help you purpose-build a greenhouse for your marijuana business. Designing the greenhouse facility incorporates: structure, greenhouse lighting, blackout, fertigation and irrigation, greenhouse heating, ventilation and cooling systems, environmental controls, benches, material handling, zone segmentation, etc. As with any greenhouse environment the specific needs of the crop are what determine the systems, processes, and greenhouse structure.

10/ Make sure you are well-capitalized.

From application fees, to licensing bonds, security systems, and administration of regulatory compliance, the marijuana industry is an expensive industry to be a part of. The capital costs of setting up a marijuana greenhouse are excessive when you compare it to traditional farming. On top of that, obtaining starter plants has its challenges as cross-border trade is almost entirely illegal at this point, and entering a brand new industry means there may be a sizable gap between production expenses and revenue.

With parallels being drawn between the emerging legalization of marijuana, and the end of alcohol prohibition in the 1930s, there is big money being invested by sophisticated investors. Among the money men backing big marijuana is Peter Thiel – one of the founders of PayPal – who has invested $75 million in Privateer Holdings. Scotts Miracle-Gro CEO Jim Hagedorn, who has already purchased two supply companies and, according to Forbes magazine, also intends to invest a “half a billion in the pot business.”

Entering a new business venture is both exciting and challenging, and when it comes to marijuana the landscape is rapidly changing. Commercial greenhouse technology and large-scale production expertise will further advance the cannabis movement.

Leigh Coulter is the president of GGS Structures Inc. and Niagrow Systems Ltd. GGS has been building greenhouses for growers around the world since 1979. Learn more at ggsstructures.com/gc