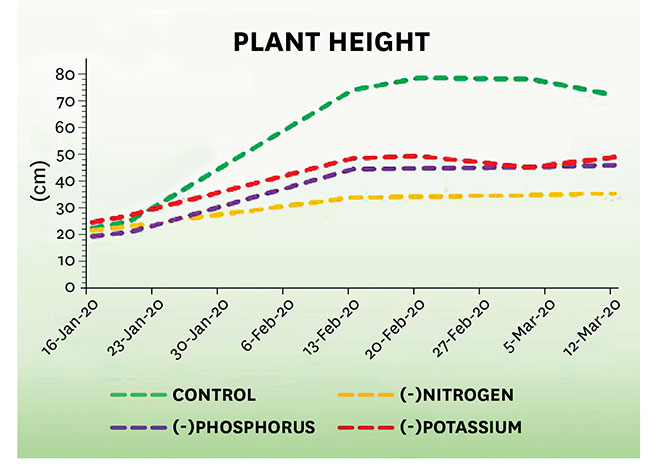 The result of nitrogen, phosphorus and potassium deficiencies, individually, on height development of cannabis plants.

Plants are a very special type of organism called an autotroph. This means that they are able to fix their own carbon from the air using only water and energy from the sun through a process called photosynthesis. Relative to animals, plants need very little to successfully grow and reproduce. Much like animals however, plants require certain nutrients which are essential to their survival. Plants are able to uptake some nutrients through their leaves but the bulk of these are taken up through their roots from their growth media.

Plant nutrients can be broken down into two main categories: macronutrients and micronutrients – which are named for the amounts in which they are required. Of the macronutrients, there are three that are again required in much higher amounts. These are often referred to as the primary macronutrients: nitrogen, phosphorus and potassium. In this article, we discuss how these nutrients behave within the plant and how they contribute to metabolism.

Methodology
To investigate the role of the three primary macronutrients in the vegetative and flowering phase of cannabis, 12 clones were propagated in an optimal nursery setting for three weeks before establishing three treatment groups forced to grow without either nitrogen (N), phosphorus (P) or potassium (K), and one control group, grown with a complete nutrient mix.

This was used to establish a baseline from which to compare the treatments against using measurements including plant height, root length and chlorophyll content over time as well as any visual symptoms and plant weight at harvest. 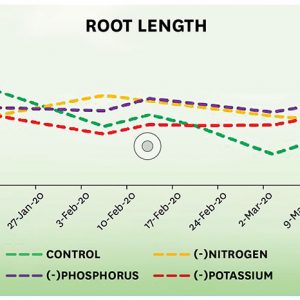 Graph showing root growth in four of the experiment groups 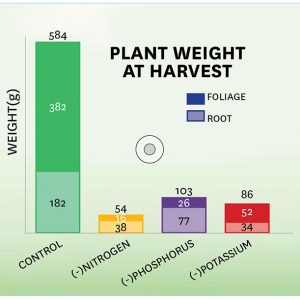 Plant weight result at harvest across the four experiment groups

Primary macronutrients
The movement of nutrients into plant roots and the use and location of these elements within plant tissue is a complex system, largely determined by their charge and polarity. Factors involved in nutrient transport include pores and ion channels in plant cell walls, as well as the process of chelation or the formation of complexes in which the plant is either surrounded by or combined with other compounds and ions to mask or change its charge or polarity.

While the movement of the primary macronutrients within the plant is not without its complexities, for the purposes of this article, we can consider nitrogen, phosphorus and potassium as mobile or easily translocated within a plant. This was visible in the treatment groups. Less than two weeks after their transplant into deficient media, all treatment groups, other than the control, were showing deficiency symptoms of their corresponding nutrient in their lower leaves. The control group appeared healthy.

Deficiency outcomes
Nitrogen plays an integral role in plant metabolism. It is a building block for amino acids that make up cellular proteins, nucleic acids of which DNA is comprised, and of chlorophyll. Therefore, when there is no available source of nitrogen present, plants will be unable to construct proteins vital to metabolism, undergo growth via cellular division, and harvest light due to their inability to manufacture one of their most essential molecules: chlorophyll. The inability to produce this compound is evident in the nitrogen-deficient treatment as evidenced by the vast reduction of chlorophyll over time, and by the yellowing leaves.

Phosphorus is essential for plant growth largely due to its integral role in cell membrane structure and energy transfer within the plant through its use in a molecule called Adenosine Triphosphate or ATP. It is also required in the construction of both DNA and RNA. The resultant lack of growth is apparent in both reduced plant height and final weight, compared to our control group. Phosphorus deficiency also results in a purple colour, seen as a purpling of the cannabis stems.

Potassium is key in a number of plant metabolic responses to stress, drought and various other vital functions. Although visible symptoms are not always immediately apparent, a significant reduction of yield was clear in our trial as well as a chlorosis of the leaf veins and margins.

Alexandra Snelling has a BSc in Plant Science with an Emphasis in Biotech. After completing a Graduate Certificate in Commercial Cannabis Production at Niagara College, she now works as a plant scientist for a Canadian LP.