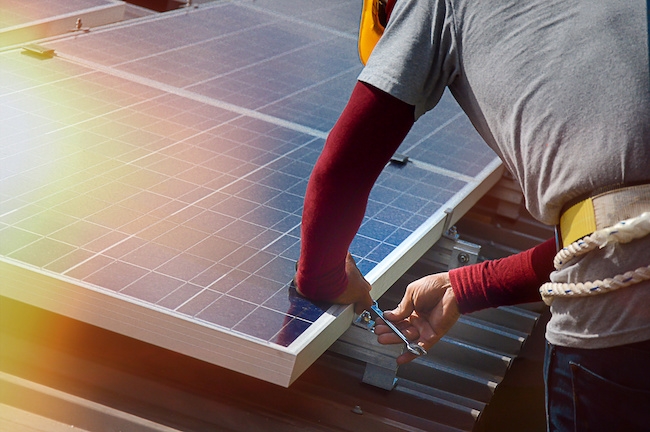 Cannabis grow facilities consume a great deal of power. The cannabis intel firm New Frontier Group noted that in 2017, cannabis growers in the U.S. used enough electricity to power 1.7 million homes, amounting to about one per cent of the entire energy consumption of the United States. And those numbers are only expected to grow.

“We’re aware of the ecological footprint that comes with cultivating cannabis and we want to ensure we do our part to protect the environment. This is just our first step in becoming an industry leader with a commitment to sustainable initiatives,” said Troy Dezwart, executive director and co-founder of Freedom Cannabis.

The solar installation in Acheson is part of Freedom Cannabis’s overall commitment to reducing its impact on the environment, the company said. The licensed producer incorporates water remediation programs in its growing process, with the intention of minimizing waste. It is also exploring bio fuel alternatives and environmentally friendly packaging options to further reduce its carbon footprint.

The solar array being installed at Freedom’s facility consists of 4,574 solar modules with a maximum capacity of 1,830 kW. The system will offset about 1,041 tonnes of greenhouse gas emissions annually, supplying about five to eight per cent of the building’s annual power consumption. Based on current demands, the installation is expected to reduce electricity costs by approximately $200,000 to $300,000 annually.

Installation of the array is expected to be completed by August 2019 and is part of the company’s plan to more than quadruple production by spring 2020.

“Freedom Cannabis is setting a positive environmental precedent in their industry and ENMAX is proud to support this organization in delivering on their environmental commitments,” said Jason Atkinson, director of solar operations at ENMAX, facilitators of the array. Headquartered in Calgary, ENMAX makes, moves and sells electricity to residential, small business and large commercial customers. To date, they’ve facilitated 50 per cent of Alberta’s total grid-connected solar.

Freedom is currently focused on growing its first premium crops, which are expected to go to market this fall. Additionally, it is commencing the build-out and licensing of its R & D, innovation, extract lab facilities, and finalizing plans for Phase two of the growing operations. Freedom is also pursuing GMP certification to become one of a limited number of Canadian licensed producers in Canada with capability to sell into select European markets.