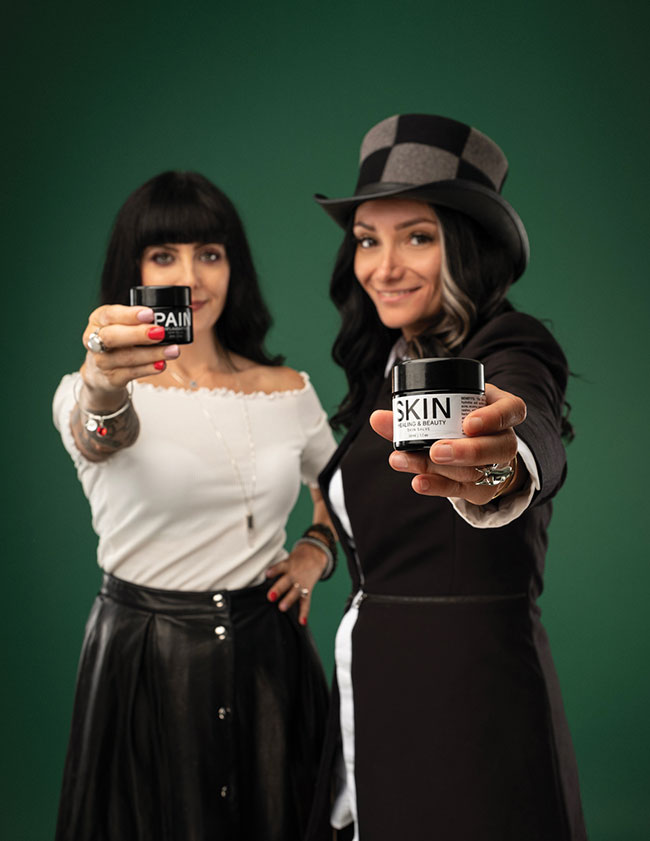 Ashley Short and Tijen Yalchin, co-founders of Earth Kisses Sky, want to make sure they partner with cannabis producers who share their values.

On October 17, cannabis-infused edibles, topicals and extracts officially became legal in Canada. That said, it doesn’t mean they’re available. With Health Canada imposing a 60-day waiting period on licensed producers (LPs) providing intents to sell on these newly legalized products, consumers will not have the opportunity to purchase THC-infused beverages, edibles, topicals or extracts until at least December.

“We’ve heard of companies getting approvals already on their products, which should be hitting the shelves as soon as late December in much of Canada; and by January, we’ll definitely see product in Ontario as well, which is the slower of the provincial courts to actually bring on any approved products. So, it’s been going pretty well from the regulatory side,” says Nawan Butt, associate portfolio manager for Purpose Investments.

Obtaining the necessary approvals for their products have given license holders the signal to begin building their inventories to go to market. But this doesn’t mean all licensees that now have the opportunity to go to market with their Cannabis 2.0 products will do so. Some have stated that they will not be doing small batch rollouts on their products, and would prefer to wait until they are prepared for a full national rollout.

“Right now, it’s very important to get a national brand built in a very safe manner,” Butt explains. “Everything needs to be done with utmost attention paid to safety.”

Butt says it is unclear whether being first to market is actually going to give an advantage to the license holder racing to get products onto shelves. At the end of the day, he points out, it will all come down to which products offer the best quality.

“(This is) in terms of taste, experience, time to come on and time to get off, because this is a whole new part of the industry that’s never been regulated before and the effects of which are difficult to measure because it hits person to person differently,” he says. “Needless to say, LPs are being very careful about how they roll out these products; and Health Canada and preventional boards are being even more careful as to what they approve because it all falls under their purview and jurisdiction.”

Building partnerships
Licence holders aren’t the only ones proceeding with caution. Some product creators in the health and wellness space are also taking their time to ensure the licensed producers they partner with for their products are the right fit in terms of availability and corporate culture. One example is Earth Kisses Sky (EKS), which sells its own ready-to-mix cannabis topicals (the consumer purchases the cannabis oil separately).

Tijen Yalchin and Ashley Short, two women who have devoted themselves to the health and wellness of others, founded EKS. Yalchin is a registered massage therapist with a diploma in massage and hydrotherapy from the Canadian Therapeutic College; as well as a diploma in acupuncture from the Institute of Traditional Medicine. Short is a certified holistic nutritionist and clinical herbalist with a diploma from the Institute of Holistic Nutrition.

For the co-founders of the company, EKS is about more than just profits. The company stemmed from the combination of a very personal journey for the two women – who are both business partners and life partners of 15 years – and a desire to improve Canada’s health and wellness space.

“We’ve been doing customized tinctures, teas, pain rubs since the very beginning, but over the past three years have been playing around with cannabis due to Ashley’s illness with Lyme Disease,” Yalchin explains. “She started making her own pain rubs with cannabis for her own joint pain. And with that, we started educating our clientele on how amazing cannabis is, and developed a trust and bond from our patients to now, consulting about it. And that’s how the birth of our products developed. We formulated a pain rub and a skin rub for people to mix in their own legal cannabis oil over the past year.”

Yalchin says LPs have shown significant interest in partnering with EKS and have began “courting” the company. But for the founders, finding a company that aligns with their beliefs is vital.

“We offer all-natural wellness products which are cosmetic grade, and food grade. And we want to make sure that we align with a company that shares those same similar beliefs, and that isn’t just about making money,” she says. “We’re here to help people. That’s what we’ve been doing our entire career. We’re definitely not salespeople by any means, but I think just based on our story alone people just trust that we have a high-quality product that we can put out on the market.”

Partnering with a licensed producer that will have the necessary products ready to go is just as important, Yalchin says, who adds that she’s seen a lot of empty shelves during some of her recent tours of LPs that appear to be struggling with keeping up with current demands.

Empty shelves aren’t the only concern for companies trying to partner with LPs for cannabis-infused products. Another issue is capacity.

Angela Mustone, a specialist producer of adult cosmetics and founder of HighonLove, a line of high-grade, lubricating oil blends made from hempseed oil for intimate adult experiences, has been meeting with LPs to discuss the potential to partner with her for THC-infused lubricants. Despite some LPs showing significant interest in building a partnership, she was surprised to hear some of them didn’t have the bottling capacity to produce her product. And this is sometimes due to LPs already maxing out their manufacturing footprints to plan for the rollout of edibles and beverages. 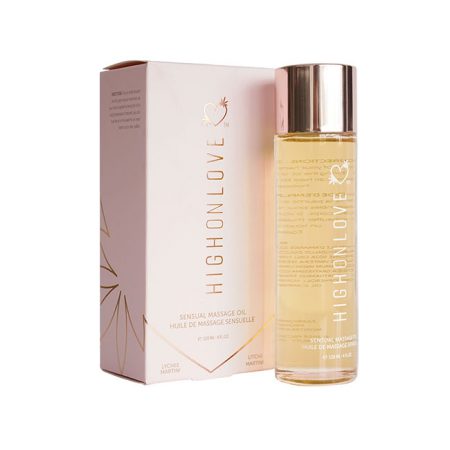 HighonLove is a line of high-grade, lubricating oil blends made from hempseed oil. Its founder, Angela Mustone, is in talks with licensed producers for a potential parthership on THC-infused lubricants.

The hype around edibles and beverages
With much of the hype to date surrounding edibles and cannabis-infused beverages, have many market experts been ignoring a potentially larger market in Canada for topicals and wellness products, such as CBD creams, salves and cosmetics?

Under the current regulatory format, Butt doesn’t think so.

“In Canada, it’s very difficult to see if there’s going to be a pick-up on the CBD side of things, because CBD is still a controlled substance in Canada. Whereas in the U.S., we’ve seen a proliferation of CBD and lots of incremental users of CBD, because it can be obtained in any pharmacy,” he explains.

“But in Canada you can only get CBD in dispensaries or online through the dispensary channel as it is a controlled substance. And therefore, we’ve seen less of a pickup even though the product is always sold out; and that’s because there’s just not enough in the market right now.”

Butt says his company is very bullish on topicals and creams, and other health and wellness products that already exist in the market that CBD can be mixed with to enhance their effects. However, he believes CBD-infused products in Canada will have a tough time moving forward.

“We think in Canada it’s going to be a tough road going forward, just because it is a very regulated and controlled channel through which these are being sold; which means that the availability of CBD to the wide consumer is very limited. Whereas, in the States it’s much more open.”

Mustone doesn’t see the new cannabis legalization rules having a huge impact on increasing sales until either the number of government-run stores increases significantly, or privately-owned retail outlets are able to start popping up.

“I don’t see it happening in Canada with the laws the way it is,” she says. “With 2.0, sales aren’t going to be what people think they are… for me to go into a government-run store it takes an hour to get there and I live in Montreal.”

With the legalization of Cannabis 2.0, Butt believes the market is currently most excited about the standardization of edible formats of cannabis than anything else, including beverages.

“We think that beverages are going to be the one game-changing formulation that actually puts cannabis into the hands of the incremental or marginal consumer,” Butt says. “Because there is a very low limit on the amount of THC that can go into a beverage as well – about 10 milligrams – ingestion is slow because it’s through your digestive tract. And because of that, what we’re going to see is a much more sustained and safer way to consume cannabis for the incremental consumer, so we’ll see the marginal consumer try their hand at their first cannabis experience through beverages.”

The other edible format that Butt sees has a potential to grow the cannabis market is the chocolates market.

Yalchin agrees that much of the focus for many LPs right now is in the beverage and edibles space, despite the popularity of health and wellness products in the U.S. Despite the slow rollout of legislation to bring THC- and CBD-infused health and wellness related products to market, Yalchin remains optimistic about the future.

“It’s not moving as quickly as we anticipated, but I think the cannabis industry is here to stay,” she says. “It’s just going to take a lot of time and patience to get things all set up.”

Butt says that it won’t be long until Health Canada rolls out Cannabis 2.5.

“Cannabis 2.0 has been a very limited rollout in how tightly Health Canada has controlled the product formulations and what can be done,” he says. “I think as Health Canada gets more comfortable with product sales, as well as product usage, we will see Cannabis 2.5 actually come out, which will be the deregulation of the limitations that go into developing these cannabis products.

“Once the education is out there, once they’re comfortable with that within the next 18 months or so, we’ll see the 10mg limit per edible or per beverage increase. And also, the second part of that will be the deregulation of the CBD channels… we’ll see the CBD channel open up as Canada takes lessons from the States and starts to implement things.”