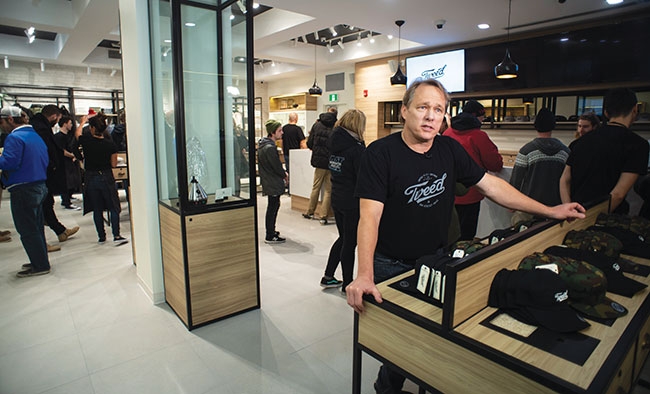 Bruce Linton At the stroke of midnight on Oct. 17

At the stroke of midnight on Oct. 17, 2018, the first sale of recreational cannabis was made in St. John’s, N.L. The transaction was processed at a Tweed store, and Canopy Growth’s chief executive officer Bruce Linton was not only on hand, he was manning the cash register.

Canopy left very little to chance in its quest to be behind the historic first sale of recreational cannabis in Canada, and I don’t mean the fact that the customer had their debit card hovering over the Interac machine as the countdown to midnight was on. In reality, the seeds for this publicity event were planted nearly a year earlier.

In December 2017, the Government of Newfoundland and Labrador announced that Canopy would be constructing a production facility within the province. In the same press release, the government announced that Canopy would be eligible to receive up to four licences to operate retail stores, with at least one of those stores being located in St. John’s. Everyone else who wished to operate a retail store in the province would have to go through the request for proposal (RFP) process and hope to secure one of a limited number of available licences.

All of that work simply to ensure that Canopy would have a store in a province with a population of just over 500,000, representing about 1.5 per cent of the country’s total population? Canopy’s ability to work around the RFP process was shrewd – dropping a facility in Newfoundland in order to open four stores did seem a bit peculiar at the time it was announced. However, on Oct. 17, 2018, it became readily apparent that Canopy’s design of being the face behind the first legal recreational cannabis transaction – both figuratively and literally – was hatched over a year prior.

In Ontario, Oct. 17th came with much less fanfare. Leading up to legalization, the provincial Liberal government announced that it would roll out a completely publically owned retail system featuring both government-owned and operated bricks and mortar stores as well as online sales.  However, in June 2017 the Conservative Party took power after the provincial election and thereafter announced that while the government would continue to roll out a publically-owned and operated online sales platform, private enterprise would now be responsible for running bricks and mortar stores within the province. However, those stores would not be licensed nor in a position to open until the spring of 2019. As such, when the clock struck midnight in Ontario, there was no smiling face behind a cash register nor any line-ups around the block. Instead, a simple website went live and almost immediately encountered a number of problems attempting to handle orders that flooded in from eager consumers.

For the first six months of legalization Ontario residents were only able to purchase cannabis (legally) online. Given the heavily restrictive advertising and promotion rules set out in the federal legislation, the ability to teach consumers about a company’s product is difficult on a good day. Being deprived of physical stores where employees can answer questions and educate consumers about the differences between products makes a difficult job closer to impossible.

However, this spring is the dawn of a new era in retail sales in Ontario. The provincial government has now licensed nearly every one of the 25 stores that were effectively awarded through a lottery draw that was conducted in mid-January 2019. The opening of these stores offers cannabis companies a massive opportunity to win the hearts and minds of consumers in this country.

Many will tout British Columbia as the home of cannabis in Canada, while other commentators have argued that Alberta may become the future hub of cannabis-related activity within the country. However, there is simply no denying that Ontario consumers, those living in a province with a population of 13.5 million, representing nearly 40 per cent of the entire population in the country, will be the engine that drives the cannabis industry in Canada.

The awarding of the 25 licences through a lottery opens a unique opportunity for cannabis companies to begin building brands and customer loyalty. Although some of the lottery winners did partner with established industry players, none of the winners themselves were previously participants in the cannabis industry. The Alcohol and Gaming Commission of Ontario has mandated that the winners cannot sell their licence nor give up decision making or control of their stores for at least a year. As a result, cannabis stores in Ontario will be stocked by decision makers who have no prior association with the industry and who ought to be open and impressionable.

The opportunity to grab shelf space and positive recommendations to potential customers from store staff is open for the taking. Both are invaluable given the limited tools that are available to companies to differentiate themselves directly to consumers.

Having worked with a quarter of the stores that have opened in Ontario, I have seen first-hand some of the strategies being employed by cannabis companies to reach these store owners and managers (in a legal way). I have seen the tremendous value that some companies put on building these relationships. Unfortunately, I have also seen many who appear to not recognize the opportunity that is in front of them.

There are 175 federal licencees, not including accessory companies. Producing “high-quality, low-cost” cannabis is one thing. Getting it sold is another.

Canopy built a multimillion dollar facility in Newfoundland for, arguably, the right to smile out at the world at 12:00 am on Oct. 17th. That plan was hatched nearly a year in advance. If you don’t think some cannabis companies have been waiting for this moment for a long time coming, think again.