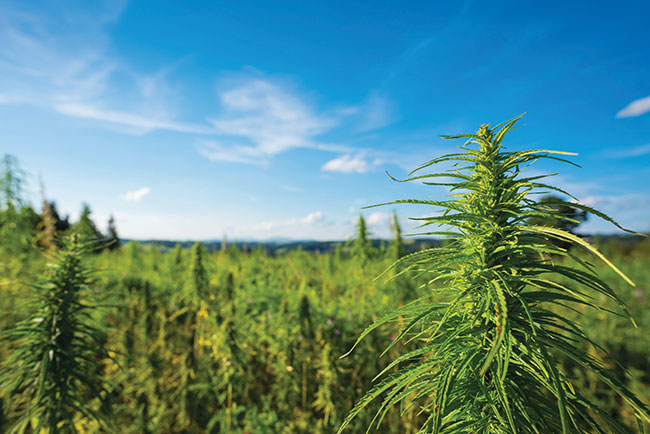 Charles Vennat looks back over the first few months of 2020 and marvels at what has transpired in the Canadian cannabis sector. He officially took over as chief executive officer of 48North just days before most of the country went into lockdown after the World Health Organization declared the novel coronavirus a pandemic.

Vennat was named CEO of the company on March 9, and 48North office staff transitioned to work from home on March 12 even as cannabis production and distribution facilities in Ontario and Quebec were declared an essential service by the government — a decision many view as a significant milestone for the sector.

“It’s been the management challenge of a lifetime to instill a leadership change and cultural shift at this time,” says Vennat, who was previously the chief corporate officer at the company. “It’s been a real challenge. People are going through something very hard in society at large, and employees feel it in different ways, whether they are working from home or in the facility.”

A leadership change against the backdrop of a global pandemic isn’t easy, but Vennat says staff at 48North rose to the challenge.

“I’m proud of this group, especially with all the headwinds this industry is facing. Layer on a global pandemic and managing to list our product in four additional provinces, and launch almost 20 new SKUs since the start of COVID-19 – it’s a remarkable achievement,” he says.

Outdoor versus indoor
Located in Brant County, Ont., 48North’s Good:Farm property is a 100-acre organic farm with 88 licensed acres of cultivation. While the company has two indoor cultivation facilities in Brantford and Kirkland Lake, Ont., it is one of a growing number of cannabis LPs putting more attention to outdoor growing after so much hype in the early days about large, state-of-the-art indoor facilities.

“It’s been proven that there was some over-investment in cultivation facilities, and there seems to be a change in preferences from indoor versus outdoor grow,” says Rishi Malkani, lead partner managing the cannabis practice for Deloitte Canada.

“There seems to be more acceptance of outdoor growing that is significantly cheaper that will cut it for certain products. Most of the major LPs have outdoor growing facilities or are considering it. I suspect it will be something on the table for most of them given the vast difference in economics.”

Much of the reasoning comes down to cash cost to produce per gram. Last year, 48North cultivated 12,000 kilos of outdoor cannabis at 25 cents a gram – a stark difference from just under $1 cost per gram that some large indoor producers have achieved.

“Cannabis companies have talked for far too long about what our cultivation capacity is. What matters is what can you commercialize,” says Vennat. “The beauty of outdoor infrastructure is you’re not paying to heat or light a facility – it’s just a bunch of open space – you plant for your needs and handle staff accordingly.”

Organigram in New Brunswick has historically focused on indoor-grown product and plans to stay the course, says CEO Greg Engel.

“What we have seen to date is that the majority of the product grown outdoors in Canada is being converted into extract, and we typically use our trim by-product for extract production. That’s our rationale,” says Engel.

The outdoor flower is considered a more value-style product, suitable for extraction and pre-rolls.

“It’s the right cultivation method for the right type of product and form factor,” says Vennat. “You see a lot of demand for ultra-premium, indoor-grown flower but also demand for value flower. The question in any branded business is where you want to position yourself and how you orient your supply chain to reflect that, make good margin and good value proposition to the consumer. Companies need to align cultivation strategies to what they are successfully commercializing.”

COVID-19’s unintended consequence for cannabis
An upside to COVID-19, according to Vennat and Deloitte’s Malkani, is that quarantined Canadians helped dislodge some of the market share from the legacy market due to consumer reluctance to meet face-to-face, and the availability during the lockdown of curbside pickup and delivery.

A Deloitte survey found that 16 per cent of the online users at the Ontario Cannabis Store were newcomers from a higher income bracket and slightly older.

“Interestingly, COVID-19 has created a lot more use cases – people were sitting at home alone, bored, and anxious, and so it’s brought a whole new user to the industry,” says Malkani.

“If stores were open, people wanted to go less frequently, or if ordering online and picking them up at Canada Post.

“I also think together with the quality of 2.0 products on the vape side and edibles, we have seen consumers look to try those products,” he says.

Sustainable practices
While many cannabis companies cut staff during the late 2019/early 2020, 48North did not, but they are working differently in their fields and focusing on their regenerative agriculture approach.

“Last year, we were far more reliant on outside labour – we have never used temporary foreign workers in the fields – we have always used local labour forces, but we have eliminated that this year,” he says.

One of the big reasons for that decision is what the 48North chief executive refers to as a better planting methodology and upkeep.

“Last year, we did a tremendous amount of hoeing because we didn’t apply that organic layer of miscanthus (mulch). Part of what that is doing is feeding living organic matter to remediate the soil and provide nutrients, retain and spread the moisture in the plant so we can water less. It acts like a sponge, so when it rains, it doesn’t pool up. It gets absorbed and retains a lot better,” says Vennat. 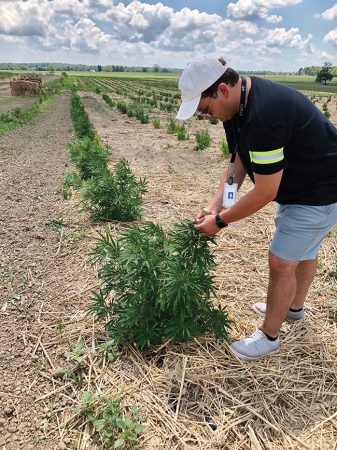 Evolving with market pressures
It’s one of many examples of how in one year, Canada’s cannabis sector has evolved quickly – pivoting from massive expansion in indoor growing to extreme downsizing.

“They have all been forced to be laser-focused on profitability,” says Malkani.

“Unfortunately, there are a lot of layoffs, but it’s the only way to profitability. It’s just simple math. They need to achieve profitability when the markets are mandating them to.”

Those that have eliminated facilities and restructured operations include Tilray in February, cutting jobs by 10 per cent; then in March, Canopy Growth announced plans to close facilities in Aldergrove and Delta, B.C., laying off 500 people and announcing they would not go ahead with plans for a greenhouse in Niagara-on-the-Lake. Then at Aurora Cannabis, after 500 people were laid off in February, announced a further restructuring in late June that would include shuttering five facilities across four provinces.

Organigram has also scaled back on its facilities plan, effectively taking 24,000 kilos offline. In early July, Organigram announced it was laying off 220 workers – one-quarter of its staff – and would cultivate less cannabis than expected.

As the market evolves, Engel says Organigram is focusing on bringing in new and higher THC strains.

“We know that is resonating with the consumer and is a big part of our shift in growing. We’ve had success with a few strains which offer higher THC, and we have some other strains coming that will be in the higher THC range of interest to consumers,” he says.

Growing to answer consumer demand
Cannabis industry observer Rob McPherson says many businesses in the cannabis sector need to focus on what the consumer wants. Despite the fact many LPs lament the lack of cannabis store openings, McPherson says while it will help with access to products, it won’t change everything overnight. He says experience is still lacking in how a regulated industry consumer packaged industry works.

McPherson says high-THC products are what the consumer is looking for and that it’s about having the right product, not just a lot of products on the market.

“The move into value products is stupid under the guise of black market killers,” he says. “It’s just low priced product and renting marketing share but not creating any meaningful connection with the consumer.”

“As long as they continue to focus on the future of the industry which I see them doing with R&D on health and wellness and pharma, understanding track and trace, understanding how to embed trust into the industry — that’s something a lot of Canadian companies are focusing on that’s really important,” he says.

Despite everything that’s transpired in the sector, Vennat says his passion for what is being developed still excites him everyday.

“It’s a labour of love, and the exciting part on top of building a business and seeing consumer sales going well and the brand resonate with people across the country is getting fired up about how we’re doing things.”