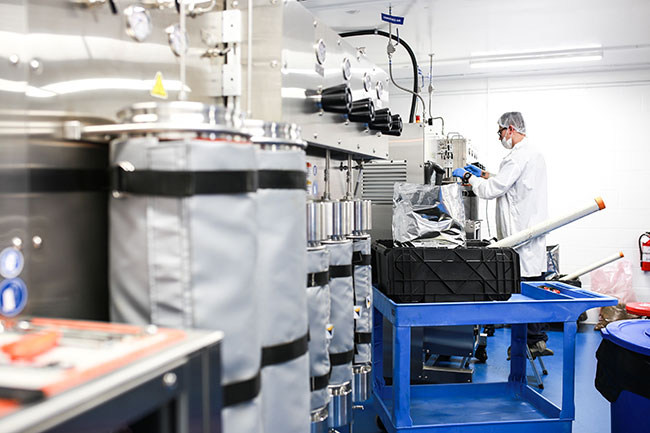 Cannabis extraction companies are gearing up for expected growth as Cannabis 2.0 products gain momentum in the market. (Credit: The Valens Company)

Market opportunities for Cannabis 2.0 and overcoming challenges ahead

As edibles and other Cannabis 2.0 products continue to roll out to consumers in Canada, some extraction companies and licensed producers are already looking ahead to the next wave of product development with a focus on using technology to refine stability and consistency in consumer experience.

“We’re already looking at what we’re internally calling 3.0,” says Tyler Robson, chief executive officer of The Valens Company (formerly known as Valens GroWorks before it rebranded in December), a third-party extraction company with facilities in Kelowna, B.C. and Bolton, Ont.

“That means developing active pharmaceutical ingredients where the product has shelf stability, and data where a pharmacist or doctor can prescribe a certain cannabinoid for a certain ailment, but also natural health products such as a protein powder or a multi-vitamin,” explains Robson. “Another big category we feel will be here eventually is health and wellness products for pets. Those are the next big three for us.”

Currently, veterinarians can’t prescribe cannabis products for pets in Canada, but many cannabis extract producers are eyeing it as a significant potential market.

“It will open up, and we’re ready,” says Robson.

Valens has an annual capacity of 425,000 kilograms of dried cannabis and hemp biomass. With a recent facility expansion, they are looking at the potential for one million kilograms annually.

While some LPs and extractors use CO2 extraction only, Valens uses sub/supercritical CO2, ethanol, hydrocarbon, solventless and terpene extraction.

“To be a one-stop-shop, you have to own multiple extraction platforms,” says Robson. “For example, CO2 has an efficiency rate of about 60 per cent, and ethanol has about a 95 per cent rate. CO2 is full-spectrum, whereas ethanol alcohol isn’t. With ethanol, because it’s such a volatile solvent, you’re losing a lot of the terpenes, flavonoids and cannabinoids in that process. So it depends on what is the desired outcome you’re looking for.”

Quest for consistency
While some licensed producers have opted to have their own extraction production facilities, Quebec-based Hexo Corp. partnered with Valens in April 2019 in a two-year cannabis and hemp extraction agreement.

“We see extractions as the next step of where products are going,” says James McMillan, senior vice-president, strategic business development at Gatineau-based Hexo Corp. “We do some extraction ourselves and partner with Valens. It’s an opportunity for us to be able to increase our capacity, but also use different extraction methods.”

McMillan says Hexo is interested in honing in on the technology that will help define consistency.

“We’re very interested in leveraging technology to ensure our consumer packaged good partners can provide a consistent product at high quality with known onset and known offset times,” he says. “Those organizations are going to be bringing products to market to help normalize the consumption of CBD, THC and even the minor cannabinoids. We’re looking much further down the road about how do we normalize this so this becomes an everyday component of someone’s lifestyle.”

To that end, McMillan says Hexo is “building up a great technology war chest” that will help produce a “really predictable, consistent quality and effect” from the product.

“That’s what the big consumer packaged good brands are looking for, and the consumer is too — you want to be able to know when you have a product that it’s going to have the same effect each time,” he says.

“There’s a whole new batch of LPs that are just starting to get their operations up and running, and we are involved in helping them set up their GMP operations and providing equipment specifications at the front end,” he says. “We sell them an entire suite of equipment that really helps them meet the requirements for the edibles and vapour categories and various categories that are going to be legalized in Canada.”

“We have just done a large install with some customers in Ontario, and we’re servicing customers in B.C. and Saskatchewan,” says Thompson. “I would say that the established LPs we deal with are adding resources right now — they made capital investments early on in the year, and so that’s what we’re busy installing.”

Cannabis industry analysts are expecting a “robust” market for oils and derivative products.

Achieving product consistency with regard to effect and quality will be a key ingredient to success.

Market prospects
In Canada, the market for extraction and oils and derivative products is “rather robust,” says Beau Whitney, vice-president and senior economist with Washington, D.C.-based New Frontier Data, a firm that monitors the cannabis industry. As the future of the market matures, he predicts there is going to be more significant opportunities for product differentiation and deployment via derivative channels.

Whitney says much of the innovation in the sector is taking place on the derivative side. “In that sense, there’s a lot of potential in the Canadian market for these derivative products and derivative suppliers,” he says.

However, he points out it won’t be a linear path to increasing business, due in part to the need for more retail outlets — the same hurdle producers experienced in the first year of legalization.

“It will be somewhat turbulent in the near term because you have got some of these retail deployment hiccups and lack of access, and higher prices in the legal market than in the illicit market,” he says.

Whitney says there are inevitable tradeoffs for those producers who are trying to do everything themselves as opposed to partnering with an extractor.

“On the one hand, when you’re vertically integrated and do the cultivation yourself along with everything else, the advantage is you manage the production costs and can optimize your cost structure. In that zone, you have to be an expert in many things. Or do you take the Heinz ketchup approach where you become an expert in ketchup making and then let all of the tomato farmers feed into you? There is value in each one of these models, it depends on where the company wants to go and what their cost structure looks like,” says Whitney.

Knowing how much to produce and what will be required to meet market demand is something many agree has been challenging to predict in these early days of legalization of extract products. Thompson sympathizes with LPs and other producers who are trying to figure out what they will need to meet market demand, without having too much inventory if consumers don’t buy.

“It’s extremely difficult to plan and very capital intensive from the standpoint of inventory,” says Thompson. “If you put too much in the market, the street will punish you. It’s an intractable problem. You don’t want to have something that sells out, but on the other hand, you don’t want to be sitting on millions of dollars of inventory.”

Jennifer Brown is a freelance writer based in the Greater Toronto Area.