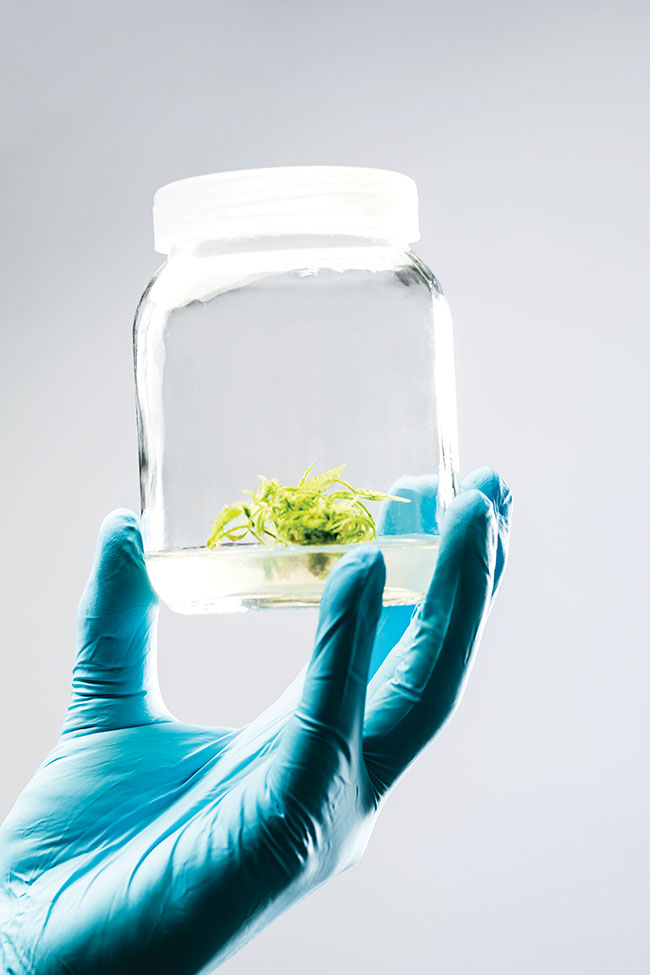 There is a huge business potential for nurseries in the cannabis industry. So far, Health Canada has only issued one licence for cannabis nursery. PHOTO CREDIT: segra

“They’re profound,” says the 15-year industry vet. “There are cannabis specialists in extraction, in packaging, in marketing, you name it, but show me a single operating cannabis nursery in Canada.”

As of February this year, Health Canada has had 10 applications for nursery licences under review. At press time, only one nursery licence has been issued by Health Canada. But the number might soon grow as some of the early applicants make it through the months-long licensing process.

That’s good news, says Davidson, now the chief marketing officer at Vancouver-based Segra International. “There’s definitely a bottleneck in the access to [young] plants, and it’s stifling the growth of the industry. Producers are all complaining about the limited access to plants.”

While not a nursery per se, Segra is applying for a cannabis nursery licence because it intends to develop and sell cannabis plantlets produced in a lab using plant tissue culture. The company is currently renovating a 4,000-square-foot micropropagation lab in New Westminster (a municipality of Vancouver) and vetting other micropropagation spaces on the Lower Mainland, while anticipating a nursery permit from Health Canada for this space in the near future. It has a molecular biology lab in Richmond, B.C., as well.

But Segra is also already legally operating inside four of the largest licensed producers in Canada. The company is doing so, says Davidson, not just because it does not have a licence on its own, but because it’s trying to win the trust of other producers. It’s a big ask, after all, to hand off the very beginning of one’s supply chain.

Still, that hand-off is something that more producers are going to have to consider, says Nico Haché, a cultivation expert with Cannabis Compliance, a Canadian cannabis consulting firm.

“Some licence holders are incorporating a nursery aspect on a full standard cultivation licence, but I don’t think they’ve realized yet how much work they’re going to have propagating and growing their own dried flower. I guarantee their genetic sales are going to be on the backburner for a while.”

New players
More standalone cannabis nurseries will inevitably try to enter this space, but that’s no easy feat. As with every cannabis licence type in Canada, the procedure for getting a nursery licence is quite involved. Health Canada only opened the cannabis nursery licence process mid-October in 2018. Not including the time needed for licensing, it can take well over six months before a nursery is established and can begin selling.

In fact, because the nursery licence is a sub-class of the cultivation licence, the process is almost the same as applying for the notoriously cumbersome cultivation licence. Both applications, for instance, require a site address, security details, ownership and personnel information, a notice to local authorities, details about good production practices (GPP), and record-keeping information. Health Canada says that new, distinct teams have been set up to review applications for these new licence classes.

Devil in the detail
One big difference between the two applications, however, is that for nursery seed production, the total surface area cannot exceed 50 square metres (for all the parts of budding or flowering plants). Another is that nurseries can only harvest five kilograms of flowering heads from plants, with the exception of seeds. Nurseries must also destroy the flowering heads – again, with the exception of the seeds – as well as the leaves and branches of the plant within 30 days of harvest.

The biggest challenge of the entire process, however, may be in finding the right location. This is why Cannabis Compliance’s vice-president of quality and regulatory, Karina Lahnakoski, says that her first piece of advice to applicants is to make sure they do a facility assessment.

Ian Davidson’s advice for others looking to start a cannabis nursery is to find an expert who can help them throughout the licensing process. “We have on our staff a quality assurance systems specialist at a PhD level, and I think it really requires that level of experience and acumen to be able to navigate the challenges of having a plan that’s compliant.”

Once a nursery has that licence in hand, they can sell plants and seeds to most of the players in the industry, including other cultivators, other nursery licence holders, processors, analytical testers, researchers and cannabis drug licence holders.

They can also sell directly to authorized provincial retailers. “That might be one thing that licencees don’t necessarily realize,” says Lahnakoski. “You don’t have to go through a processor to get your plants and seeds to the province.”

For nursery seed production, the suface area must not exceed 50 square meters, under Health Canada rules. In addition, nurseries can only harvest up to five kilograms of flowering heads from plants, except for seeds.

There is an enormous need for cannabis nurseries globally, experts say, and a huge potential exists for the creation of a new segment in the industry focused on seed production.

Cost considerations
As for the costs associated with going through the licensing process and getting a cannabis nursery off the ground, the numbers can vary widely.

As of April 2019, the federal government’s fees include a $1,675 application screening fee per application, a $1,691 security clearance fee per application, and a minimum $2,500 annual regulatory fee per licensed site. Once a nursery starts selling, they also have to hand over some of their revenue to the feds, namely one per cent for cannabis revenue of $1 million or less and 2.3 per cent on any cannabis revenue in excess of $1 million.

If a nursery wants to employ a consultant to navigate the licencing process, that could cost tens of thousands of dollars.

And to build a fully-equipped, brand-new cannabis nursery greenhouse, Haché estimates that it could cost approximately $275 to $400 per square foot.

There will also be marketing costs of course, but to get the most bang for one’s buck, Haché suggests approaching the big licence holders first.

“They need large numbers of plant material weekly to keep flower production ongoing. And if propagating in-house, they are sacrificing flowering space for genetic stock and propagation production instead.”

It won’t be easy figuring out what to charge them, however, adds Haché, and for him that’s one of the biggest challenges for nurseries right now. “We know what the price of a gram is, but what’s the value of a plant today? I can’t tell you that. You may grow 30 grams or 500 grams, depending on the size of the plant, the growing methodology, etc. And now, is your ‘premium cultivar’ worth a lot because you selected it? Or because it has a specific trait that you guarantee is there that nobody else has? Or something else?”

Growth prospects
Yet, given all of the marketing challenges, licensing headaches and high costs, Haché says they’re worth it because this is such an untapped market with great potential.

Davidson agrees, saying the need for cannabis nurseries globally is “enormous”. Sure, over the next few years he thinks some of the largest producers will proceed with vertically integrated, seed-to-sale business models. But, as with most commercial agricultural crops, the rest of the industry will do the opposite, he believes, where mid-sized companies will become specialized in specific segments of the industry, such as nursery, production, processing, extraction or distribution.

“There is a new segment of the industry to be created here, and that’s pretty amazing. The rest of the process is pretty much there, so this is an opportunity to solve what is the biggest pain point for growers. And I can tell you, the conversation about this is lively among producers,” Davidson says.

(This article was originally published in Greenhouse Canada, a sister publication of Grow Opportunity.)