A close look at how aeroponics in currently enabling growers in Canada and beyond to achieve premium results and premium profits. 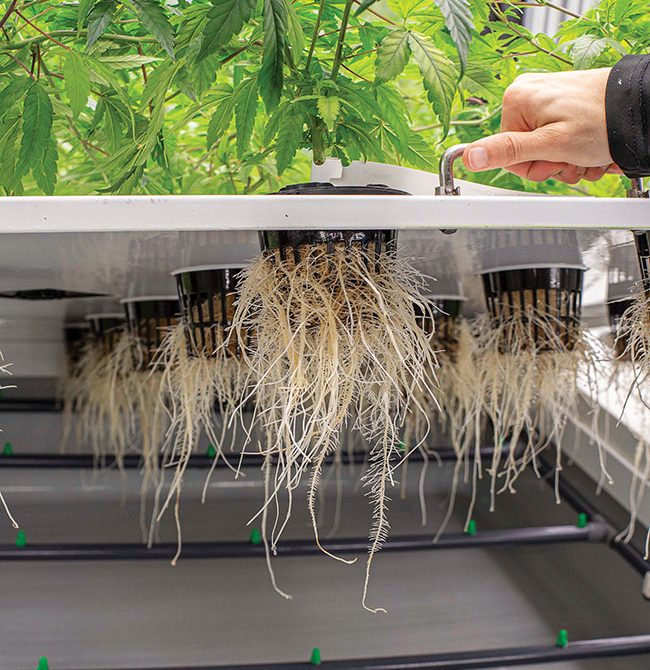 When Onyx Agronomics' director of cultivation Andrew Lange, looked into cultivation techniques five years ago, a primary goal was consistency in production and quality. With the automated nature of the aeroponics system, he has been able to achieve consistency over the years since installation. Photo: Onyx Agronomics

Aeroponics, as most know, is a growing method where fertilized water is misted or sprayed onto roots kept in darkened chambers. No soil means virtually no root pests or disease pressure. Nozzle clogging, a common historic problem due to the nutrients in the irrigation solution, has been solved through different nozzle designs and novel water pressure sensors.

Collectively, today’s entire aeroponics systems (sensors, precision nozzles, software, etc.) have higher capital costs than hydroponic systems, but lower operating costs. They also require more knowledge. The potential for massive root growth is high, for example, and must be closely monitored. A back-up system, in case the fertigation pump fails, is critical, as plant root cells can only survive about 30 minutes without water. Water can be 100 per cent recycled within aeroponics systems, but growers need to carefully manage pH and mineral build-up. Some growers discard their water periodically.

This growing method itself, combined with the highly-precise nature of the technology and the advanced management skills required, enable production of higher quality cannabis compared to hydroponics, according to those Grow Opportunity spoke to in this story.

“Aeroponics is the highest level of efficiency for photosynthesis,” explains Phil Gibson, vice-president of marketing at aeroponics tech provider, AEssenseGrows in Sunnyvale, Calif. “Roots dangle in air with effectively infinite oxygen. Roots are not bound by soil and expand root surface area with abandon. The result is very high absorption and very efficient carbohydrate creation in the plant.”

Cannabis, says Gibson, “loves this infinite nutrient feed, so you can hit it with very high-intensity photosynthetic photon flux density at the canopy surface. The result is very fast growth, and potency is a result of this efficiency. Anecdotally, our customers are seeing five per cent to eight per cent lift in cannabinoid content from plants grown in aeroponics, versus the same strains grown in soil media.”

Grump Weed, Onyx Agronomics, and 420 Kingdom had mostly similar reasons for choosing this cultivation method, but all have unique perspectives and journeys. They all use AEssense tech, as does FarmaGrowers in South Africa, but its operations are still getting up and running.

Myriad of reasons
When Andrew Lange, the director of cultivation at Onyx Agronomics (and CEO of his own firm, Ascendant Management) was evaluating potential cultivation techniques five years ago with his team, some of their primary goals were consistency in production and quality, and achieving very low thresholds for microbial levels. “Sustainability was also high on our priority list as well to reduce our environmental impact, and of course a competitive cost of production while achieving the above,” says Lange. “[With me] having experience in aeroponics already, it quickly went to the top of the list as the technology achieves all of these goals.”

The automated nature of the system has allowed him to achieve “incredible consistency” over the years since installation. In addition, they consistently achieve “extremely low” microbial levels (<1 CFU) in finished products. Lange says this is in large part because of the absence of growing media, which “therefore greatly reduces the risk of contaminants, either microbial or pest.”

From a sustainability perspective, no requirement for growing media means that no media waste is generated, and of course, water use in aero systems is always about 10 per cent of hydroponics. Lange adds that “with all those advantages, the price of production is naturally quite a bit lower than other growing technologies,” with “about 60 per cent less labour required per square foot to achieve the same results.”

He cautions however, that the learning curve is steep. “Small changes can elicit drastic changes quickly in the growth of the plant and that can be a negative in the beginning as much as it is a strength,” he explains.

And, in terms of the overall biggest difference in operating aeroponics and other grow methods, Lange pinpoints cleanliness. “You will often hear those who have tried aero say ‘it was great for a few harvests then it just went downhill,’” he explains. “That’s most likely because their system wasn’t properly cleaned during or after each grow, resulting in pathogens taking hold.” Other than that, growers considering aeroponics should understand that vegetative growth is more rapid and schedules must therefore be adjusted accordingly. “We consistently grow plants from clone size six to seven inches to full-grown, ready to flip to flower 24 inches, in seven days,” he says. “Defoliation and training techniques need to be adjusted to accommodate the more rapid growth that aero is known for.”

High-quality critical
The cleanest growing environment possible to ensure high quality – that’s why aeroponics was the cultivation system of choice for Grump Weed in Brandon, Manitoba. Grump Weed is a micro-licence cultivator well-known for its terpene-rich ‘Ice Cream Cake’ strain.

President and CEO David Hargreaves believes “a good-quality premium cannabis product starts with creating the cleanest and smoothest tasting cannabis on the market.” He explains that most cannabis producers don’t proactively focus on ensuring their product is free of mold and other microbes during production. Instead, after harvest, they irradiate their products. However, due to aeroponics, Grump Weed has no need to irradiate. “Every surface in each grow room can be cleaned daily,” says Hargreaves, “and fully disinfected weekly.”

There’s more to the quality aspects of aeroponics (beyond high THC and hygiene) in Hargreave’s view however, although he thinks genetics plays a much greater role in quality than the type of growing system.

“We believe that smooth and clean smoke, good bud structure, bud density, trichome count, terpenes, and flavonoids, are all more important than THC,” he says. “Our main focus is increasing the quality of the product and in many ways, aeroponics helps us accomplish this.”

When asked about learning curve, Hargreaves says no one on his team had aeroponics expertise, and they just learned along the way. He explains that while the learning curve was large, having a system that automates pH, nutrient levels, water temperature, and spray cycles has helped a great deal.

Changed target market
Jeffrey Thorn chose aero cultivation from the start at his business 420 Kingdom in Bakersfield, Calif. in December 2020. He has 12,000 square-feet under production. His criteria for a growing method was first of all, lowest-cost production, followed by consistency and sustainability. Aero ticked all those boxes.

“Our labour costs are a lot lower than those of conventional growers, and we’re making profits where they are struggling,” Thorn explains. “The capital costs were high, but our margin is large. Our cost of production is US$150 to US$160 per pound (we use chillers and LED lights), and we’re selling at US$1,500 to US$1,600 a pound. We were getting over US$2,000 a pound, but the market is oversupplied right now. So, our return on investment (ROI) will be fast relative to the size of the capital investment, five or six years.”

A big part of the ROI story at 420 Kingdom is not just the low labour costs, however. Using aeroponics has also enabled at least one strain so far to achieve THC levels five per cent to seven per cent higher than competitors. This has enabled the 420 Kingdom brand to surge ahead, with much higher profits. Thorn explains that “my business plan was to produce about 90 per cent to wholesalers and sell 10 per cent as our products, moving all production to our brand by year two. But our brand has created so much buzz that we were able to stop wholesale at about six months. We started out testing 15 strains and lucked out upfront with our Watermelon Mamosa in terms of quality and yield.”

Thorn explains that most people don’t understand that many of the strains out there don’t do well under aero production. Most of the strains he has tried have produced a very low yield, but he has three other strains besides Watermelon Mamosa that are doing well, and he will keep going with trials to find at least two more.

Aeroponics has also created great interest in his brand from the sustainability angle. Thorn had always believed the positive environmental attributes of aero would be “a huge differentiator” in his primary marketplace of California, the U.S. state where environmental consciousness is likely highest of all states across the country. He believed it, even though he was told again and again that it would not be a differentiator, and he’s been proven right. “For us, using aeroponics has created a ‘market ocean’ that we are swimming in alone,” he explains. “It’s the environmental story: no waste (we compost our vegetative material), less pesticides, recycling all the water. It’s also the high THC and better taste.”

Another part of Thorn’s success was the wise decision to shorten the learning curve significantly by hiring a consultant recommended by AEssense. And while 420 Kingdom is the only aeroponics grower in California that Thorn knows of, he’s hoping more will emerge.

He’s now sharing information with other growers interested in aeroponics, firstly because he’s happy to share information, but also because he believes that the more operations that use aeroponics, the more well-known and preferred ‘aero cannabis’ will become.