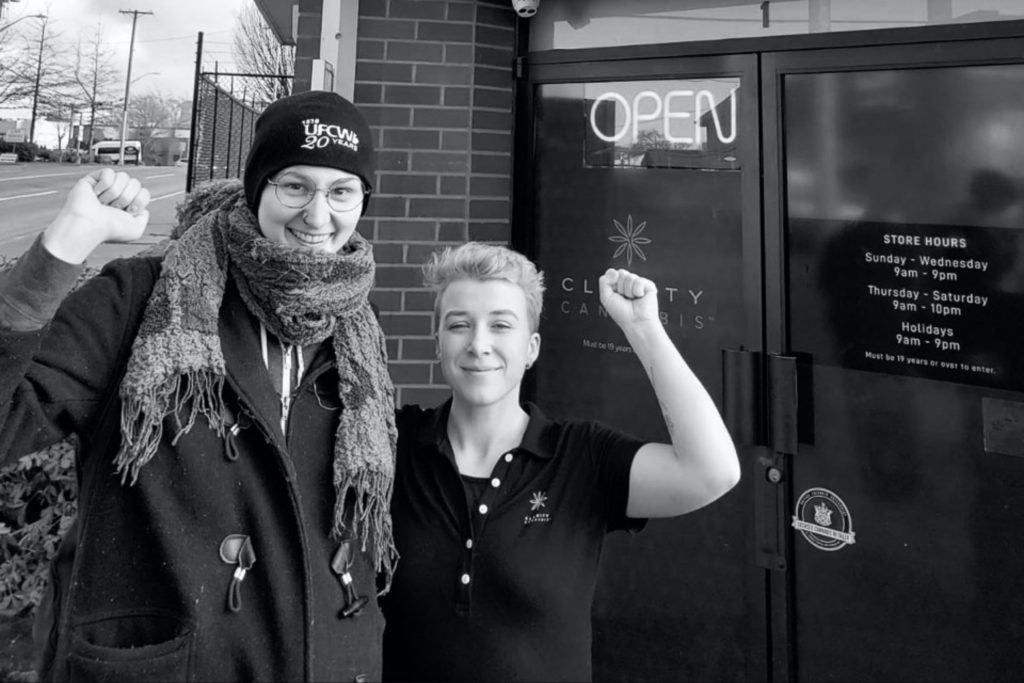 One week, my coworkers and I were discussing the state of affairs in our shop and the industry as a whole. The next week, we were signing union cards at the end of our shift.

At first, we were just talking to core members of the staff. We started to do our research and held issues meetings. There were even live text threads to make sure everyone was included. On Feb. 19, we agreed on a union to organize with and made sure everyone had a chance to sign membership cards.

The seven-day period between the day we submitted our signed union cards and the day we voted was rough. Suffice it to say, our employer wasn’t thrilled. There were some promises and veiled insinuations to dissuade us from our campaign to organize. Promises are nice but ultimately meaningless without a written contract to ensure that commitments are made real. We moved on undeterred.

When you love what you do, you fight to make the situation better. We don’t want Clarity Cannabis to be a business with low sales, high turnover and untrained workers. We want the business to be successful, and we want to be the reason why. At the same time, we need to eat and pay rent.

Cannabis stores unionizing is not a new idea to Canada. Publicly-controlled stores in Quebec and Ontario have already made the leap to join the United Food and Commercial Workers (UFCW), a union that represents largely retail sector employees.

There’s no reason why privately-owned retail budtenders – or cannabis consultants as we like to be called – could not be afforded the same opportunity.

Here in B.C., we’ve been blessed with an abundance of experience with cannabis unlike anywhere else in the world. Although the effort to open enough legal cannabis retailers across B.C. is slow going and sales have yet to meet expectation, there is cause for optimism as cannabis consultants transition from grey market to legal stores.

Unfortunately, those who’ve made that leap – and certainly those who joined the industry seeking a stable long-term retail position – may well find themselves dissatisfied.

Wages are low at best and continue to be driven down by employers seeking competitive advantage, so it isn’t surprising that the topic of unionizing materialized early on with workers at Clarity. The conversation was already drifting around by the time I arrived there in November 2019. I was new to the cannabis industry but I entered the space with experience working in unionized tourism companies and film sets.

It should come as no shock that low-paid workers in this sector who have experienced challenges like erratic schedules, lack of training, and policy turbulence on the job would be agreeable to a call to unionize.

There is little room for advancement in this industry. Training is often promised, but does not materialize. In the mean time, customers look to cannabis consultants to go beyond standard retail expectations, as we play therapist, researcher and product tester.

Our hours fluctuate with the demands of the store and city by-laws and there is no bracing period when your hours, and thus your paycheque, change. While some employers are actively trying to drive wages down by removing paid breaks and decreasing starting wages, inflation continues to lunge forward. Raises are rarely offered and when they are, you are looking at a pittance.

Now that we have gone through with it and formed a union, things are getting back to normal with hope for change on the horizon. To Clarity’s credit, and after a brief period of growing pains felt by all, management has been acting with grace.

My coworkers and I look forward to hashing out a contract towards the summer, with many of the issues geared towards making us better at our jobs and making the workplace function more effectively. We hope the ultimate takeaway is that our business becomes stronger and more stable, and offers us viable careers as cannabis consultants.

After all, Clarity is a mainstay in our region, with a reputation for friendly employees that provide excellent client care. We will continue to see that this business finds success at the same time that we secure a fair return for our labour.

For employers looking in, you might think that your staff, like many low-wage retail workers, are just passing through. But if you actually speak with your employees, you may be surprised to find out that is not the case.

Many are keen to develop an expertise in cannabis. Some want to work their way up the retail chain of command. Others want to move into horticulture. Some have been cannabis consultants long enough that they consider themselves resources for newly-opened businesses. cannabis consultants actually want to fill a valuable position through sommelier training, industry research, dispensary tours, conferences, and of course, product testing.

Regardless of their long term goals, one thing rings true for each of them: Working as a cannabis consultant, as it stands, is not a life-sustaining job. With the outrageous cost of housing in B.C., many of us are struggling to hold onto a lease, be in a tiny microsuite like mine with the negligible cooking capacity, a room with a friend, or heaven forbid, the ultimate dream – a one bedroom apartment anywhere in the city that would give you the space to have a real life outside of work.

I could imagine that some employers out there are wondering what they can do to avoid a union popping up in their store. To them I say, If you want to avoid a union in your establishment, take your employees’ concerns seriously, because if you don’t, they will.

Adelaide Wilder is a cannabis consultant for Clarity Cannabis in British Columbia. She has worked in the Gorge Road location in Victoria for five months. She and her colleagues joined UFCW 1518 on Feb. 19, 2020, making them the first cannabis workers at a private cannabis retailer to unionize in Canada.