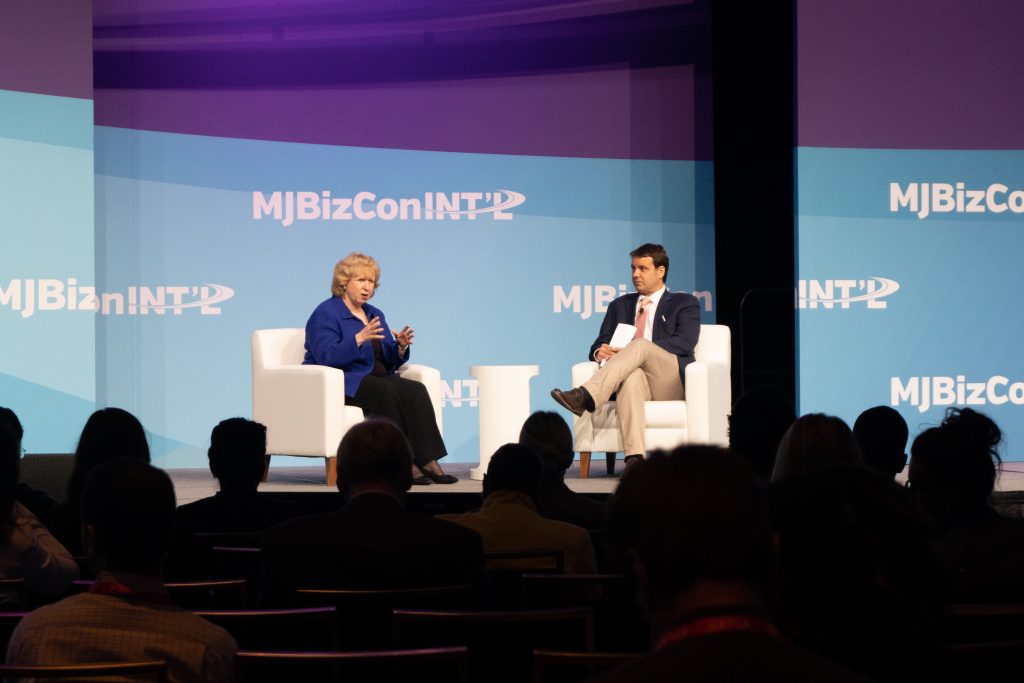 Canada has a unique opportunity to be a thought leader in the burgeoning global cannabis market, said former prime minister Kim Campbell. And this can only be achieved when the industry and the government work in collaboration.

“Our template and our experience are incredibly valuable,” said Campbell. “Our current prime minister has led the legalization push but I think that it is something that Canada is trusted and respected as an advanced democracy, and some, I think our experience will be very attractive and perhaps persuasive to other countries.”

Campbell was the keynote speaker at this year’s MJBizCon International Conference and Expo in Toronto. On Sept. 5, she talked about how an effective collaboration between the industry and government regulators will be the key to a thriving cannabis market in the country.

When developing regulations and a legal framework for a new area, like legalization of cannabis, Campbell said that policymakers must be willing to learn and unlearn. From a business perspective, it can be frustrating when regulations don’t seem “connected to reality,” she said.

Though Campbell believes that clear regulations are one of the most important protections for the industry, there are still a lot of things that we don’t know about cannabis. This is why, she said, companies and industry leaders must play a more active role in developing a collaborative and educational relationship with policymakers.

“I think when people are making regulations and are part of the government process dealing with cannabis, there’s a lot that some people have to unlearn, that they have to replace outdated knowledge with new knowledge… And that is where the industry is so important, is having those conversations,” she said.

Reflecting on her own experience in government, Campbell said at the time, people were generally hostile to marijuana because many associated it with criminality and saw it as a “gateway drug.” As justice minister in the 1990s, Campbell played a role in enforcing strict anti-cannabis laws.

“I was pretty ignorant and didn’t use cannabis myself,” said Campbell. “I think there are a lot of people like that in positions of public authority who simply don’t have any familiarity with it. And so, as the discussion began in Canada for the legalization of cannabis, there was a lot more interesting conversations and by that time, I was already out of office.”

As she learned more about the health benefits and economic promises of a legal cannabis market, Campbell said, like many of today’s policymakers, she became more convinced in the positive impact of legalization.