At least one major licensed producer has welcomed news that the Canadian government will be introducing regulations that will allow growing of cannabis in outdoor farms. 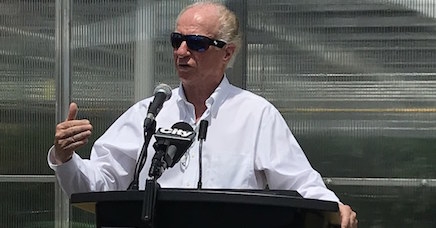 Responding to a news report from The Globe and Mail that the federal government will be legalizing outdoor grow, CannTrust CEO Eric Paul said his company has been “preparing for” outdoor grow and has a plan in place to implement large-scale outdoor production.

“Traditional farmers will be tapped to contract-grow cannabis outdoor,” Paul told Grow Opportunity. “We’re going to give them our genetics, we will put the fence around and the security… we will apply for the (Health Canada) licence and they will be a contract grower for us.”

Paul and other executives at CannTrust unveiled Tuesday (June 26) its brand new, high-tech greenhouse facility in the Niagara Region. The new $40-million Niagara Perpetual Harvest Facility in the town of Pelham, Ont., is a 450,000-sq.ft. hydroponics greenhouse with an estimated capacity to grow up to 50,000 kilograms of cannabis per year. The facility will gradually expand to 600,000 sq. ft., doubling CannTrust’s capacity to over 100,000 kilograms.

In a news report, The Globe and Mail quoted a spokesperson for Canadian Health Minister Ginette Petitpas Taylor saying the government’s move to allow outdoor grow “under strict rules” comes after a thorough consultation process.

The Cannabis Canada Council, the national association for the cannabis industry, had been advocating for a ban on large-scale outdoor cultivation for cannabis, saying allowing outdoor grows poses security risks that could divert products to the illegal market. Most major licensed producers have also been heavily investing into their indoor grow facilities.

The economics for outdoor grows, however, make sense and will result in lower production costs, said Paul. He said traditional indoor grows have costs of about $2 per gram. A more efficient, state-of-the-art facility, such as the new CannTrust greenhouse farm in Niagara brings down the cost to about 75 cents per gram. An outdoor farm, however, would not have many of the costs associated with an indoor facility such as power and environmental control systems. This could lower the cost to about 25 cents per gram, Paul explained.

“The reason we’re doing (outdoor grow) is to help the LCBO and the OCS (Ontario Cannabis Stores) be competitive in retail against the black market. It’s the only way you’re going to get the black market out,” the CannTrust CEO said.

The federal government, according to The Globe and Mail report, is expected to announce the new outdoor grow regulations later this week. Inudstry observers expect the same strict security restrictions will be imposed on outdoor facilities as it has been for indoor grows.

Cannabis grown outdoors, with less environmental control systems, will be used for extraction to produce edible products for CannTrust, Paul said. The premium, high-quality dried flowers will continue to be grown in the high-tech greenhouses, he added.

CannTrust’s new Niagara region facility is expected to operate on a perpetual harvest system, with a continuing work cycle 365 days a year, “creating a steady production capacity and a more stable work environment for employees,” CannTrust said in a statement. The facility will ultimately have a work force of around 250 full-time employees. The site will also be home to a new, large extraction facility in the near future, Paul said.