At the heart of southwestern Ontario, one crop producer has mastered the art of aquaponics, where healthy tilapia fish are grown alongside premium quality cannabis. 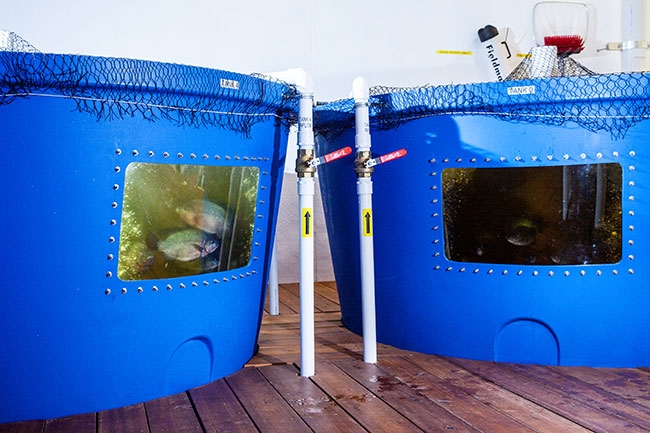 A recirculating aquaculture system (RAS) is an important component of an aquaponics farm. It uses a series of biofiltration process to treat the water and allow it to be re-used infinitely througout the system. At the heart of southwestern Ontario

Green Relief has been growing marijuana for medicinal purposes since 2016. From the beginning, the company has made it its mission to find sustainable ways to grow their crop.

“Aquaponics started for us as a small greenhouse addition to the back of our house with a self-contained system,” explains CEO Warren Bravo. “We were going to grow vegetables for our family all year round, at a greenhouse that we can walk up to all year round at our residence.”

Bravo’s 50-acre property in Flamborough, Ont., is home to Green Relief’s 32,000-sq-ft. indoor grow facility. Construction is underway for an additional 220,000-sq.-ft. building that is expected to produce 45,000 kilograms of cannabis annually. A third building is also part of the expansion plan, which will provide an additional 180,000 sq. ft. of production space for the company.

Green Relief is one of at least 114 licensed cannabis producers in Canada to date, but its growing technique is unique in the industry. Using aquaponics technology developed with Nelson and Pade, in Montello, Wisconsin, Green Relief uses fish waste carried through a recirculating water system to deliver nutrients to the cannabis plants. Around 300 tilapia fish are grown in circular tanks located inside the grow room. Upon maturity, the fish are harvested and donated to local food banks.

“The idea of having an aquaponics system at the house has morphed into what you see now as North America’s – or the world’s – only high-production cannabis facility using aquaponics,” Bravo states.

Fish for feed
Put plainly, aquaponics is a system of growing food that uses a closed-loop process that mimics the ecosystem approach.

Fish start out in the system as fry. They stay in the nursery with young cannabis plants. As both plant and fish grow, they are transferred to the main grow room where they stay until ready for harvest, at which point they go their separate ways – the cannabis flowers go to the dry room for processing and the tilapia go into Second Harvest trucks for delivery to local food banks.

All the magic happens in the grow room. Derek Bravo explains they use only organic fish feed to grow the fish. Fish waste are then produced, which flows through the tank into the clarifiers. The clarifiers are the first level of filtration, consisting of a light screen in the middle. Heavy solids then sink to the bottom of the tank, while the finer solids flow through from the clarifier into the mineralization tank – where the finer solids are broken down further. The water then goes further into the bioreactor.

“That’s where the aerobic bacteria is created with heavily oxygenated tank with a bunch of bio beads, where the bacteria lives on,” Bravo explains. “Once the beads get too covered with bacteria coating, it will break off, flow into our system that attaches to one of the grow beds.”

In this process, nitrification occurs and the resulting nitrate becomes nutrient for the plants.

“The plants just sit on Styrofoam, and they just float on the water. Their roots go down the water and just uptake nutrients whenever they need them,” Bravo says.

The water then flows back to the fish tank and the cycle repeats.

Ecosystem approach
CEO Warren Bravo notes the significant amount of research and the huge learning curve that went into the process of building Green Relief’s aquaponics facility. Bravo and Green Relief co-founder Steve LeBlanc both come from the construction industry. Their knowledge of buildings and structures only took them halfway through achieving their goal of establishing a sustainable cannabis production company that leaves as little impact on the environment as possible. The rest, they had to learn.

The pair spent over two years doing research on aquaponics, speaking with known experts on aquaponics and sustainable agriculture around the world. Among them was Nick Savidov, senior research scientist of the aquaponics program at Lethbridge College in Alberta.

In aquaculture, an integrated multi-trophic system follows the concept of a natural marine ecosystem, where one species produces the waste or byproducts that become sustenance to another organism within the ecosystem.

“Natural ecosystem does not have waste; everything is getting utilized, so that the waste product of one component – such as fish manure – become feed stock for another component, which are beneficial microorganisms such as bacteria, fungi, protozoa and so forth. The plants are fed by the water, then the water goes back to the fish,” Savidov says.

The aquaponics approach is different from the traditional monoculture approach in agriculture – such as hydroponic or soil-based crops – which have generally been unsustainable, he says.

In an aquaponics system, “recirculation” is the key word, Savidov says. “Water becomes not just a habitat for plants, fish and the nutrients and microorganisms. Water becomes a carrier, a link which ties together all those components.”

Although in its infancy, aquaponics is beginning to gain traction in the food production industry. A recent decision by the U.S. Department of Agriculture not to reject aquaponics as an organic technology opens up a huge potential for aquaponic-based food production facilities to get certified as organic, Savidov says. He hopes Canada would follow suit.

Another advantage of aquaponics over traditional methods of production is that every component can be naturally grown without any use of chemicals or additional fertilizers.

“In modern agriculture we use resources such as fertilizer. All fertilizers come from finite resources… from raw deposits which are not limitless,” Savinov notes. “What happens if we exhaust all raw deposits?”

Savidov acknowledges fish feed may be the biggest cost factor in an aquaponic system, but even that, in the long run, can be addressed by a self-sustaining, advanced system that increases plant output with less amount of fish feed. The key is in the aerobic bioreactors.

“Use of aerobic bioreactors allows 100 per cent nutrient recycling in an aquaponic system and improves the crop output in the system,” Savidov explains.

A recirculating aquaculture system (RAS) is an important component of an aquaponics farm. It uses a series of biofiltration process to treat the water and allow it to be re-used infinitely througout the system.

The business case
Aquaponics done right requires a significant amount of initial investment. Green Relief invested $12.5 million in the construction of its building and the state-of-the-art aquaponic system inside it. It was an essential investment that is now starting to pay off for the cannabis producer.

“We have spent a lot of money upfront, but because we did that we actually, right away, got a very inexpensive cost of sale,” CEO Bravo says. Currently, Green Relief’s cost of producing cannabis is at $1.42 per gram, and the average sale price is $9.05 cents per gram, according to Bravo.

A variety of factors contribute to the lower cost of production, including the use of LED lights, which saves the company between 35 to 40 percent on hydro cost. The company also does not use any external inputs, such as fertilizers or pesticides, for its plants owing to the sustainability of the aquaponic system, i.e. nutrients from fish waste as fertilizers, Bravo says.

Despite the expanding cannabis industry in Canada as legalization takes effect this October, Bravo believes consolidation will continue to take place and the market will calm down.

“There is going to be a reconciliation in the industry where the business is going to be like all other businesses,” he says. “You’re going to have to have a low cost of goods sold and a very high quality product going out the door on a regular basis. If you can achieve that, I think you’ll be standing when the dust settles.”

Today, a big chunk of Green Relief’s capital goes into research and development. Earlier this year, the company received its licence to produce and sell cannabis oil. The company has already spent $2 million building its extraction laboratory and upgrading its existing production systems.

While most licensed producers are seemingly in a race to get the lion’s share of the recreational cannabis market, the tilapia-growing cannabis producer is in no hurry to burst into this new market.

For now, it’s focused on continuously improving and providing its medical cannabis customers with the highest quality product, Bravo says. “It’s about helping people and the quality of life for our patients, and so much more to do with the R&D and the science of what makes this plant so effective as medicine.”

He adds, however, that it’s not closing its doors to the recreational market.

“It will be foolish to say we’ll never take advantage of the rec market; we’ll see. It’s not in our plans right now, but I never say never,” he says.

The Canadian recreational marijuana market may not be high on Green Relief’s list of conquest at the moment, but the global market is. It recently signed a joint venture deal with Swiss companies Ai Fame GmbH and Ai Lab Swiss AG to develop a new line of cannabis products that will be sold across Europe and Canada.

Green Relief is also cultivating another business opportunity with its aquaponics supplier Nelson and Pade. Bravo explains building an aquaponic system specifically for growing cannabis requires a great deal of customization to ensure all components are working as they should be. The result was an aquaponic system, developed with Nelson and Pade, that is optimized for cannabis cultivation – which Green Relief has acquired the rights to distribute across North America for cannabis growers. Green Relief is also the exclusive distributor of Nelson and Pade aquaponics systems for vegetable growers in Canada.

Another business opportunity is swimming in Bravo’s mind.

“In the additional building that we just started we’re going to have 50,000 tilapia. There will always be a component of our fish being donated to charitable organizations, but what I would like to do with our fish is use our CO2 supercritical extraction technology to extract Omega 3 from our fish and blend them with cannabis oil extract and put out something new and different to the neutraceutical world,” Bravo says.

Working with Professor Joseph Rasmussen, chair of the Department of Biological Sciences at the University of Lethbridge, Nick Savidov of Lethbridge College helped develop a university course on aquaponics, aerobic bioreactors and integrated food production systems.