Sustainable production is a growing trend across major industries. A number of licensed cannabis producers are taking on this challenge, making sustainability a core part of their company identity. 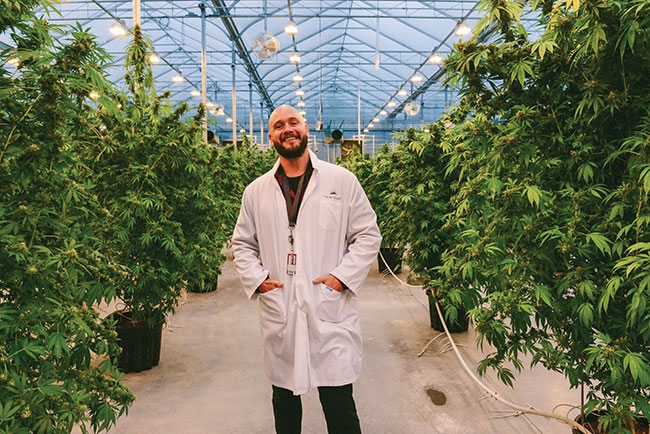 Grow Opportunity takes you to Canada’s West Coast, in British Columbia, home to producers of some of the best-grown cannabis in the country. These producers employ different practices for cannabis cultivation, but they share a common expression of staying true to authentic, sustainable cultivation as it’s been practiced in B.C. for decades.

A common thread among these LPs is the recognition of value and desire to grow cannabis with integrity. “There’s definitely a craft and a skill involved that we’re really keen to protect and maintain,” affirms Sophie Rivers, brand manager at Whistler Medical Marijuana Corporation (WMMC).

WMMC has been selling certified organic cannabis within the medicinal market from since April 1, 2014. This small-scale operation, born in the mountains of Whistler and founded in 2013 by Christopher Pelz, has maintained the integrity of organic cultivation with the help of seasoned growers from B.C.

“It’s really important to stay true to the original roots and make sure everything’s done properly. We don’t want to be a huge producer where the love has gone out of it, and we firmly believe in growing organic medical products in order to offer people alternatives,” Rivers says.

Sun-grown
In Maple Ridge on B.C.’s lower mainland, Tantalus Labs CEO Dan Sutton shares his own incentives for getting into the cannabis space.

“We saw that opportunity really manifesting in the intersection of this body of agricultural science and knowledge that we have here in British Columbia, and then this great history we have with cannabis. That was the genesis of it all; myself looking at a commercial scheduled regulation scheme implemented by Health Canada in 2012, and saying, ‘Look, the cannabis industry stands to benefit so much from the knowledge that we have here in B.C.’”

Sutton founded Tantalus Labs in 2012, and received his cultivation licence in 2017. The company has built  what it claims as the world’s first cannabis-tailored, industrial greenhouse.

“The environmental control of our facility combined with the natural inputs of sunlight, through our translucent greenhouse roof and walls, have yielded cannabis that I think is a lot more exciting than we had ever expected,” Sutton says.

The future of cannabis is sun-grown, he notes, and greenhouses will play a major role in creating “commercial and social” opportunities in the industry.

“When you start to look at the social implications of legal cannabis, they’re so wide-ranging, and environmental is one that is not often discussed. It also really allows us to leverage our natural environment; we’re blessed with this natural hospitable environment for cannabis cultivation in B.C., and there’s no other environment, except for greenhouse, that could really take advantage of that.”

Organic flair
Good Buds hails from Salt Spring Island in B.C.’s coastal gulf islands. A location which reserves a known flavour in its own right with regards to organic agriculture and the legacy of sustainable growing practices – particularly in outdoor cultivation. Good Buds was founded by Toronto-born, brother team, Alex and Tyler Rumi.

The gulf islands exhibit potentially the most temperate weather in the country, and “cannabis loves that mid temperature weather,” says Tyler. “Down the whole west coast of the continent, from Mexico to Alaska, people grow cannabis outdoors with success. Salt Spring is very privileged.

“We are located in the pacific channel, which is excellent for cultivation. Growers here have always been speaking the language of organic soil, and symbiotic relationships within the biosphere while building upon community. This is everything that we are looking to achieve,” says Tyler.

While Good Buds await organic certification from Ecocert, the cannabis producer is already implementing organic practices in its grow, aligning with the company’s core values, reflected by the community in which it resides.

“People will find you because they are seeking the product you’re producing. I don’t think it’s niche; I think it’s the way people are expressing their consciousness – through the desire for cleaner products, and awareness around where and how these things are produced. This includes cannabis,” says Tyler.

Good Buds is currently growing cannabis indoors, but is gearing up for 2019 outdoor organic cultivation. “The goal is to be majority outdoor sun-grown cultivation,” says Alex.

Among the sustainable growing practices implemented is rainwater collection, sun-grown methods, living soil, cover crops – as explored by Good Buds’ expert cannabis cultivator, and the potential for reusable packaging made from recycled plastic. These methods not only offer patients and consumers a superior and, in the case of WMMC and Good Buds, organic product, but also promotes energy efficiency and reduces the carbon footprint associated with an otherwise energy intensive practice.

Sustainable growth
Sustainability in an industry of this scale is imperative. Sophie Rivers of WMMC believes there’s plenty of room for improvement in the cannabis industry.

“The amount of chemicals that people put into their plants can be quite scary and not sustainable.” Toxic environmental pollution as an externality is an important issue because of how damaging it is on a large scale, she added.

At WMMC, “the main sustainable growing practice that we use is called living soil,” Rivers says. “All of our plants are grown in soil, and we do it in a way that the soil can be re-used for up to two years. Every time we grow a new harvest, we re-use that soil rather than throwing it out, which a lot of people who grow in soil do, but it’s very wasteful and awful for the environment.” The water inherent to their location grows exceptional cannabis, and is a major blessing for WMMC.

Power consumption is another concern the company addresses through the use of more efficient grow lights.

CEO Dan Sutton and his team at Tantalus Labs have done well in reducing energy consumption at its production facilities. They have designed a greenhouse in the Fraser Valley where “economic self-interest, and social and environment sustainability” converge to create the best opportunity for cannabis to thrive, “while saving so much energy input,” Sutton says.

“I think light levels are often underestimated. When you walk into a grow room in a traditional grow-op style environment, you see these really bright lights that are really close to the plants. It’s easy to overestimate how much light is actually getting onto those plants, but the sun is a 15-billion-year-old fusion reactor that hangs in our sky. Even on a cloudy day, the plants are getting a higher intensity and broader spectrum of sunlight into their leafy green fan leaves than if it was through a synthetic lighting environment alone,” says Sutton.

Re-use, recycle
In addition to sunlight, Sunlab also uses natural rainwater collection for feeding cannabis plants. The retention ponds hold 5.3 million liters of water, and can fill up in two major rain events, “so we could legitimately be using reserves all summer long,” Sutton says. “Rainwater is not treated with chlorine or fluoride, so it’s a better input to irrigation.”

Over at Good Buds, brothers Alex and Tyler – with the expertise of its all-female cultivation team led by master grower Samantha Mikolajewski – use 100 per cent rain water collection, sun-grown methods, and living soil as part of their growing practices. The land on which they built their operation is “already agriculturally solid,” the say. They are also working with organic nutrients from Vancouver Island.

Good Buds’ master grower Mikolajewski comes from “an organic background in California” with a history of cannabis activism. She is using outdoor cover crops to reduce energy input, irrigation and water storage, and to enable organic pest management. Through these practices, Good Buds is fostering a symbiotic ecosystem based on the important principles of permaculture.

Good Buds also supports the cannabis community that already exists and thrives on Salt Spring and the surrounding islands. The company created the Buddy Program for microcultivators on the coast. Through this agreement, they are teaming up with small-scale cultivators to assist them in achieving compliance within the regulated market. The company wants to “provide the facility and licensing” in exchange for the existing expertise widespread in the gulf islands among craft growers. This program has already seen lots of success, according to Tyler. Good Buds is allowing microcultivators to set their own prices and maintain their own identity so consumers know exactly where the product is coming from.

“This will allow for great recognition within the space,” Tyler says.

While there are frustrations regarding excessive product packaging, some producers are going for the more sustainable option. Good Buds is looking to use post-consumer plastic for its cannabis containers, and is in the “early exploratory stage” of potentially establishing a point of sale return so that packaging may be re-used to reduce waste.

These three West Coast licensed producers are demonstrating how sustainable growing practices can be implemented fruitfully within Canada’s booming cannabis industry, and ultimately produce a superior quality product that does not necessarily put a huge strain on the environment.

Haley Nagasaki is a freelance writer based in Victoria, B.C. She can be reached at info@haleynagasaki.com.

Related
Nurtured by nature: the process behind organic growing
Examining taxes facing the cannabis industry
Examining trends in extraction
This is Grow Opportunity