As opportunities for CBD product development grow, veterinary professionals are calling attention to the needs of our four-legged companions 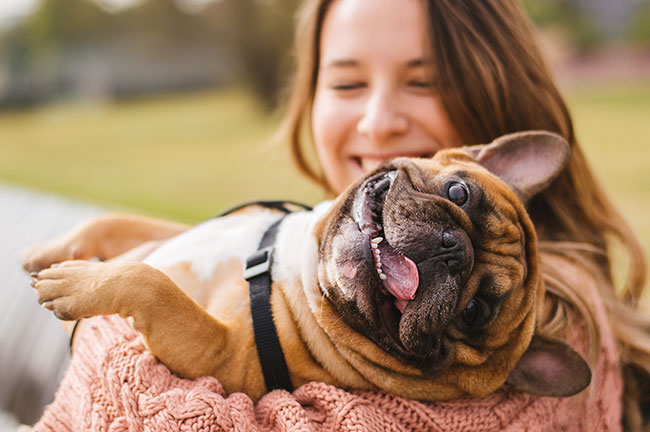 As in the case of medical cannabis for humans, there are numerous anecdotal reports on the benefits of CBD for pets, but there has been little research done to support these claims and pet advocates are calling for increasing the body of evidence.

Consumer and industry interest in CBD supplements designed for pets has grown significantly in recent years. Legalization of hemp-derived CBD in other jurisdictions has resulted in many Canadians looking to CBD products for all manner of pet health issues, and this rise in consumer demand has important implications for the cannabis industry.

The proliferation of black market products and regulations that tie veterinarians’ hands are giving rise to an important debate about the role of CBD in animal medicine. And now, producers and other industry stakeholders are advocating for legislative changes that would provide consumers with safe, legal alternatives to the unregulated products currently on the market.

CBD is reaching a tipping point, and it owes it’s time in the spotlight in large part to the pet health industry. Here are just some of the dynamics driving the niche – and factors that are hindering its growth.

Science and safety
CBD may have significant therapeutic potential for pets. Dr. Sarah Silcox, a veterinarian with the Toronto-based Greenwood Veterinary Services and president of the Canadian Association for Veterinary Cannabinoid Medicine, notes that both hemp-derived and cannabis-derived CBD may have roles in veterinary medicine, provided the appropriate veterinary oversight is in place.

“Even a small level of THC (like that present in hemp) may be enough to produce some side effects at first,” Silcox says. “A lot of veterinarians’ only experience with THC in pets is with dogs that come in intoxicated.

“There are conflicting reports on whether or not dogs have more CB1 receptors (than humans). Dogs are certainly more sensitive to THC on first exposure. But it now appears that they may acclimate to the effects after multiple exposures.”

One July 2018 pilot study published in Frontiers in Veterinary Science examined the effects of a small dose of hemp-derived CBD on arthritis in dogs. While this study is very early-stage and had several limitations, it did show encouraging results – namely, a decrease in pain as measured by the canine brief pain inventory.

George Smitherman, senior VP of corporate affairs for Biome Grow and former Ontario Minister of Health, says that studies like this one are very promising – and he’s excited to see more research in the future. Smitherman says that while the extensive grey-market application of CBD has led to a number of anecdotal reports, there’s been little research in a proper health context.

“These are the kinds of studies that will be validated with more science,” Smitherman says. “It takes time to build the science, but this study is one very promising example of moving beyond the anecdotes and into the proof-points.”

While evidence pertaining to the effects of CBD on dogs is already scarce, there is even less information when it comes to other members of the animal kingdom.

Silcox notes that there’s little data on how CBD may impact cats, specifically. While cats are more sensitive than dogs to some common animal pain medications, there are no published studies showing the efficacy of CBD in treating pain in cats. Anecdotally, though, Silcox has heard from a number of cat owners who say that cannabis-derived medications have considerably eased their cats’ chronic pain.

Silcox says that much of veterinary cannabinoid medicine is about implementing proper oversight procedures such as using the right product at the right dosage level. Cannabinoid medicine is variable and dependent on the individual, she says, and no two animals will respond to the same dosage in the same way. This means manufacturers that are researching or developing cannabis-derived products for pets will need to implement strict dosage protocols and quality controls, preferably with veterinary input.

Black market
There does not currently exist a federally approved CBD product for pets, and CBD itself remains a prescription-only drug. While veterinarians are currently permitted to prescribe drugs that contain cannabis derivatives, it’s illegal for them to prescribe cannabis.

Despite the lack of legal products, however, consumers are showing keen interest in giving cannabis products to their pets. In a December 2018 interview with the CBC, Dr. Andrew Morrison, a veterinarian in Lake Echo, N.S., said that a number of pet owners are purchasing unregulated CBD or hemp products that have been designed for human use, and “experimenting on their own with their animals.”

Unclear laws aren’t helping matters. Dr. Jenna Valleriani, PhD, a UBC postdoctoral fellow studying cannabis policy, told The Globe and Mail in January 2019 that Health Canada and the RCMP have failed to enforce the existing laws around CBD products, which is creating confusion among both consumers and industry professionals around what is and is not legal.

Sandler, who is also a member of the Canadian Veterinary Medical Association’s National Issues Committee, says the CVMA and the CAVCM are jointly lobbying Health Canada for an amendment to Part 14 of the Cannabis Regulations that would permit veterinarians to authorize cannabis therapy in animals.

“We’re also asking that Health Canada add a warning on THC products (that would say) ‘keep out of reach of children and animals’,” Sandler says. “Given the increased risk that high-THC products have to pets, and the likelihood that edible and topical products will be particularly appealing to pets, an amended warning label is imperative.”

The recent passing of the Farm Bill in the United States, Sandler notes, has caused a proliferation of hemp-derived CBD products in pet shops, grocery stores, and pharmacies south of the border. This stands in stark contrast to the regulatory situation in Canada. Sandler says that as long as Health Canada continues to classify cannabidiol as a prescription drug, it will be tightly regulated.

“If the status of CBD changes to Natural Health Product,” Sandler says, “we might expect to see CBD available ubiquitously, as it is in the United States.”

Regulatory challenges
Silcox warns that if Health Canada fails to reclassify CBD as a non-prescription item, Canada will fall behind in the global market. Tight regulations, she says, have put Canada at a disadvantage on the world stage. Silcox advocates for a more balanced approach that allows for market opportunities without leaving CBD completely unregulated.

“The United States is a bit of a ‘wild west’ right now, so there does need to be some regulation,” Silcox says. “We need to ensure that products are being properly tested and labelled. When we (the CAVCM) met with the policy director for the Minister of Health, she said the fact that veterinarians weren’t given the authority to prescribe cannabis products was likely an oversight.”

Health Canada is planning to consider giving veterinarians prescribing authority at the next tri-annual review. But Silcox says three years is too long to wait.

“There are a lot of (animal) patients that won’t be alive in three years,” Silcox says. “And from a safety standpoint, pet owners are continuing to use cannabis products for their pets – products designed for human use. That warning label needs to be changed now.”

Addressing these many legislative problems though, is going to be a challenge. Smitherman says the wheels of government turn slowly, even in the best of circumstances. He says governments often fail to make progress in certain areas because resources are being committed to other initiatives.

“As someone who had the privilege of running a large government department, it’s hard to deploy resources in one area when you already have a lot of resources focused somewhere else,” Smitherman says. “So, in one sense, we’re suffering from all the progress that’s been made on the broader medicinal and recreational regulations. In the context of CBD, we don’t have an easy-to-point-to regulatory model.”

Smitherman says despite the lack of a regulatory framework, the industry is still in an exciting place. Some of the early players in the Canadian medical cannabis market, including Biome Grow, are now in a position to source CBD from indoor-grown, medical-grade cannabis.

Road forward
Sandler hypothesizes that legislative changes may permit veterinarians to prescribe CBD in much the same way that Canadian doctors can currently authorize cannabis for human use through the existing medical channel. Whether CBD will be reclassified as a natural health product remains to be seen, Sandler notes, but companies like Grey Wolf Animal Health and cannabis producer CannTrust are in the process of developing safe and effective cannabis-derived products for all manner of animal species.

Should CBD be reclassified as a natural health product, experts say it would unleash a sales boom in the cannabis industry. Smitherman notes the regulatory environment is rapidly changing, but there are many reasons to be optimistic.

CBD is in a period of rapid definition with plenty of research and development activity in progress, and reclassification, he says, would create an entirely new cannabis market essentially overnight.

Mike Straus is a freelance writer living in Kelowna, BC.


Related
Understanding heat and humidity for bud growth and quality
CannTrust shares dive on report that CEO, chair knew of unlicensed pot growing
Neptune Wellness poised to expand hemp extraction capacity
Licence revocation could be on the table for CannTrust

2 Comments » for PET PROJECT: Cannabis care for the furry friends