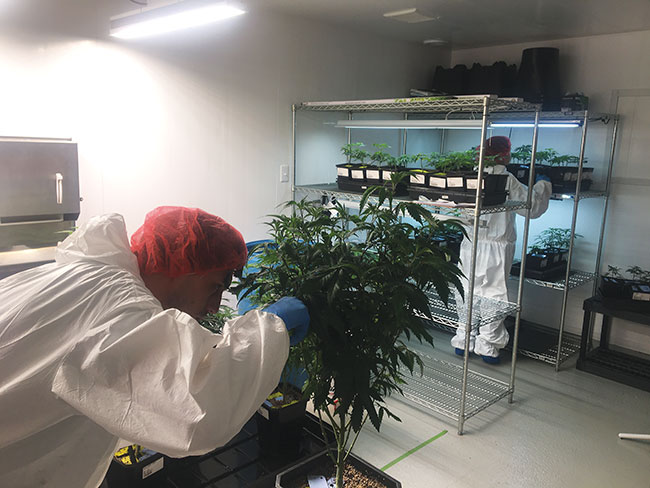 Gerard Smith is no stranger to growth, in more ways than one.

He comes from a family of Newfoundland farmers who understand that the best crops are cultivated with great passion and care. For decades, his family farm in Freshwater Placentia Bay thrived under his father’s leadership in mixed farming of crops and livestock.

In 2013, Smith decided to reinvigorate the farm with a new venture into apiculture, or beekeeping. He was the first to raise bees in the island. He learned the trade quickly and in seven years, the farm has become the island’s leader in beekeeping, supplies, training and bee products.

It was time to reinvigorate the farm again, and this time, Smith’s passion led him to cannabis cultivation. In August, G&M Family Farm will prepare to harvest its first crop of craft cannabis.

“We’ve got lots of plans, lots of exciting plans,” says Smith, who received his micro-cultivation license in January. “We’re pretty eager and we will be out there competing in the marketplace soon, for sure.”

Smith knew that he couldn’t expand his farm to cannabis micro-cultivation alone and he couldn’t trust just anyone to lead this new venture, so he looked across the country to recruit the right people. Last November, Smith hired Matt Draper as the lead cannabis cultivator for the farm. He says Draper’s passion for the plant was something that he understood well.

“Matt handles each and every plant. He doesn’t leave anything to chance. Every plant is examined and watered when it needs it,” says Smith. “We needed to find someone that was industry savvy, that worked with a big grower and knew how to roll out product but also had an intimate knowledge of living soils and of course, growing techniques. Those are hard to find.”

After spending six years in commercial cultivation, Draper left Northern Ontario for the opportunity to lead his own micro-cultivation operation at G&M Family Farm. He says managing a 2,100-sq.-ft. canopy space is a completely different experience from what he has known in the corporate space.

“I’ve seen the massive corporations where we pump out 5,000 kilos a year,” says Draper. “As craft growers, we have more of an opportunity to take that time and understand specifically what each cultivar needs and wants.”

Hands-on cultivation
Draper says when the culture of a large corporation is to push out as much product as possible, growers don’t have the time to pay attention. At G&M, Draper takes pride in the fact that not one stage of the cultivation process is automated – from watering the plants, to installing and maintaining the LED grow lights, and monitoring the natural chemistry of the plants’ living, organic soil.

G&M is in the process of applying for its organic agriculture certification from the Canadian Food Inspection Agency.

“There’s very, very, very few cannabis companies in the whole Canadian market that can say they are 110 per cent organic and we’re on the right track here,” says Draper.

Pandemic preparedness
Not even a pandemic will slow the momentum at the farm. As the COVID-19 outbreak began to ramp up in early March, Smith worked to acquire “more than we could afford” in equipment and supplies in anticipation of a disrupted supply chain.

Because they are a small team that work in a remote part of the province, they have been able to implement simple physical distancing measures and sanitizing procedures to ensure the workers’ health and safety.

“These plants don’t care that there’s COVID or if Santa’s coming. They’re here to grow and they’re going to be ready when they are ready. There’s no stopping,” Draper says.

Infused products
Besides the farm’s first harvest in August, Alex Del Vecchio is getting ready to launch a new product line that incorporates the farm’s best-selling honey and bee products, and infuse them with cannabis extracts.

Del Vecchio has a chemical engineering background with a specialization in cannabis processing and extraction. She worked as a junior QA and extraction technician at the same Northern Ontario facility as Draper. Together, they found the opportunity to work at G&M through a friend and jumped at the chance.

“I’m constantly doing things. On the bee side of the farm, I’m experimenting with formulated recipes for our honeybee by-products. I’ve made some lip balms, body butters, lozenges, and through our ACMPR license, I’ve been able to experiment further by infusing them with MCT oil, ethanol extractions and rosin,” says Del Vecchio. “Right now, we’re just trying to perfect everything and get the product to the best quality we can.” 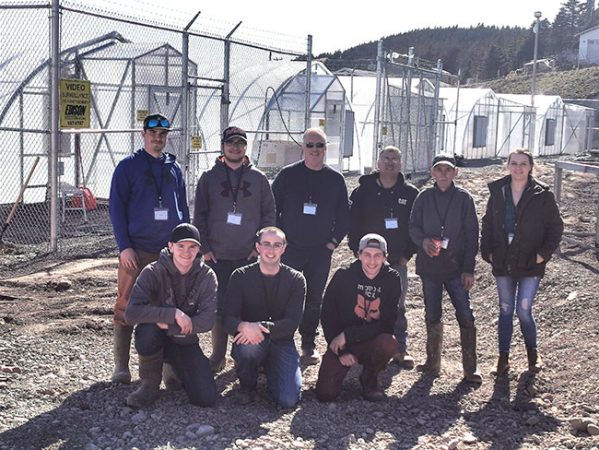 Gerard Smith (back, third from left, wearing sunglasses) with the G&M Family Farm staff. He started to venture into beekeeping in 2013 and was the first to raise bees in Newfoundland. 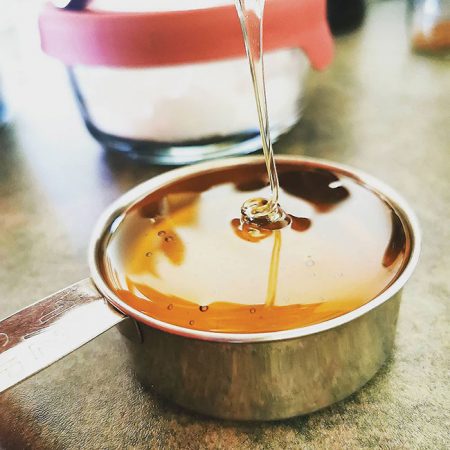 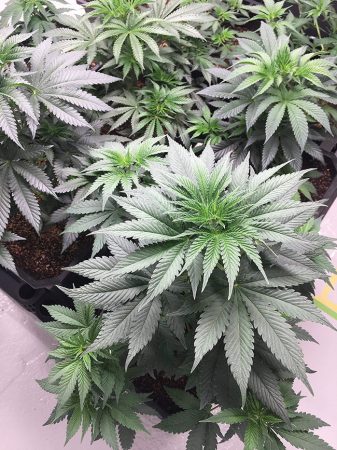 As craft growers, we have more of an opportunity to take that time and understand specifically what each cultivar needs and wants.

Del Vecchio is constantly inspired to develop and experiment with product ideas for the business. Transitioning from working at a large-scale LP to a craft operation in a family farm was a huge adjustment, but it’s something that has afforded her freedom to do projects that she enjoys.

As G&M works on its processing licence application, Del Vecchio is concentrating her efforts on enhancing the bee and honey products the farm is already known for. Because the farm has a known community of loyal customers, Del Vecchio has the luxury of getting regular feedback on how to tweak and improve their offerings.

“I actually find it relieving and relaxing to handcraft these products. Like, I’ll be making 24 lip balms here and 24 lip balms there. We send it for people to test and we change the product accordingly,” explains Del Vecchio. “It’s not like there’s this huge pressure for mass output, and I’m able to take care of each thing I make.”

Especially at this stage, when they are perfecting their processes, it’s that personal touch and connection with its customers that will set their products apart, says Smith. Nothing is pre-processed and all ingredients are organically and sustainably sourced from within the farm.

Smith has great aspirations for his family farm. He plans to expand the beekeeping products, supplies and bee products. He wants to offer more beekeeping training sessions and workshops to the local community. And in five years’ time, he wants the brand to expand beyond the province and become a publicly traded company.

“The one thing that I see is continuously recurring is the passion that we all have,” says Draper. “If there was eight days in the week, we’d be doing it eight days a week. And that’s something corporations can’t really offer.”